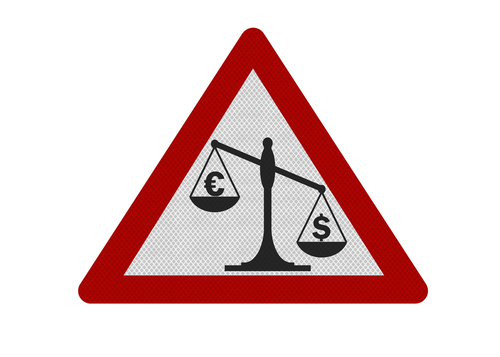 Breaking forex news that the Euro Zone fell back into economic contraction caused the euro to weaken against the US dollar during late morning Tuesday (August 14) currency trading. However, the losses were limited by sentiment among market participants that global central banks would act to stimulate economic growth. The EUR/USD grew 0.24% to 1.2361 during the trading session; however, this was 0.20% lower than the session high of 1.2386. The news also trimmed the euro’s trading gains against other major currencies.

According to forex news from the official statistical agency Eurostat, the currency bloc’s Gross Domestic Product declined by 0.2% on a quarterly basis in the second quarter, and fell by 0.4% on a year-by-year basis. The decline followed zero economic growth in the first quarter of the year. The economic reversal of the Euro Zone is seen by analysts as a precursor to the currency region’s possible fall into economic recession, which is formally defined as two consecutive quarters of economic contraction.

The GDP contraction reflects the effects of measures taken by member-countries Ireland, Greece and Portugal to deal with the effects of the region’s sovereign debt crisis, which forced them to seek bailouts from the EU government and the International Monetary Fund, and Spain to seek aid for its troubled banking sector. The measures these countries were forced to impose in order to service their debts include raising taxes and slashing public spending in order to meet strict fiscal targets as a condition for receiving aid. Further forex news from Eurostat revealed that the EU’s economy now lags behind those of its trading partners the US and Japan. US GDP grew by 2.2% on a quarter-by-quarter basis in the second quarter while that of Japan by 3.6% in the same period.

There was positive forex news, however for two of the region’s strongest economies. Germany’s GDP grew by 0.3% for the second quarter (April to June) while that of France defied expectations by recording zero growth. The resilience of the German economy was attributed to faster than expected export growth, which resulted in a net foreign trade balance, and stronger public and private spending that helped offset a fall in investment. Meanwhile, the better-than-expected French growth figures were achieved in spite of worrisome economic trends, such as the country’s continuing loss of competitiveness to southern Euro Zone countries, which was reflected in a negative trade balance, with imports outpacing exports, resulting in the trade deficit reaching record high levels. France’s trade deficit was seen to have reduced growth rate by 0.5 percentage points. It was also evident that the German economy was already starting to feel the effects of the Euro Zone debt crisis, as Q2 growth was slower than the 0.5% recorded in the first quarter.

Other forex news from other countries in the region offered a mixed economic outlook, with Italy GDP shrinking by 0.7%, Cyprus 0.8%, Finland one percent, Spain 0.4% and Portugal 1.2 percent. On the other hand, Austria and the Netherlands both recorded 0.2% GDP growth, while Slovakia grew by 0.7% and Estonia 0.4 percent.