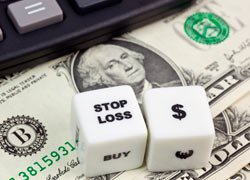 I’ve discussed the subject of stops before, as part of the money management technique, in a trader’s overall business plan, stops are an essential ingredient. Fact; the second you trade without stops is the same second you’ve compromised the money management aspect of your trading plan. How can any trader be risking a defined percentage of their account if they don’t protect their potential loss with a stop?

The next new trade I take I can only absolutely guarantee one thing, I know how much I can potentially lose, generally no more than 1% of my account. Without a stop I could lose it all, I could go further and to extremes; without a stop I could receive a margin call. With each trend trade I take I look for the HH or LL indicating the ‘turning point’, the initial stop averages out at 200 pips. Over time I’ve developed the habit of selecting this stop for all my trades, I then ‘micro adjust’ the stop to find the exact HH or LL.

My average loss per trade however is significantly less than the 200 or the micro adjusted stop, I’ve just recalculated the figures and a losing trend trade loses me on average 109 pips, that’s measured over the last 19 losing trades taken last year (2011) which included my most recent biggest losers. The largest loss was 211 pips and the smallest loss 36 pips. However, there’s no temptation to reduce the stop to the average loss size, as this would incur increased losses as many trades can be circa 100 pips offside for days but still ultimately be winners.

I take a very positive view of my stop placement and here’s why it’s the crucial issue and critical success factor; my stop is rarely breached. Only two of my losing nineteen trades were closed due to the stop loss being hit and both would have incurred bigger losses (circa 300+ pips), had they not been in place. The stops in fact saved me circa 2% account balance. Now none of us are perfect, none of us infallible, the two recent trades stopped out happened during Xmas shopping with my youngest. It was “sod’s law” at work as we term it in the UK. The one day off from trading I have in months and the market moves against me dramatically.

I’d have reversed direction on one of the trades had I been available, whilst in the region of 150 pips down, and entered the new trends on both currency pairs earlier. So all things considered the shopping trip, meal at Burger King and watching Sherlock Holmes was an expensive day out! But here’s the real issue, I was able to take the day out knowing that my stops (across all my trades) were in place, they were executed perfectly and protected my balance from further attrition, they had done ‘exactly what was said on the tin’.

Not using stop losses is financial suicide, unless you’re investing like Warren Buffet, were a stop loss obviously mightn’t make sense, but when the BoJ calls up Warren Buffet and asks him to sell a few hundred billion Yen on their behalf you really don’t want to be long in Yen without a stop-loss…

As part of my research for FXCC I often browse trading forums, I like to take the temperature of forex traders, to see what current trends are (not currency trends, more behavioural trends). I’m often left speechless by the ‘advice’ offered up, by far the most incredulous I discovered recently was the suggestion that stops are out of vogue and that if intraday trading or scalping then apparently “stops are useless”. Other notable remarks were;

“The market doesn’t surprise me that many times, so what’s the point.”

But here’s a sage like remark from an old trading friend of yesteryear;

“Trading in the old-fashioned bucket shop had some decided advantages over speculating in a reputable broker’s office. For one thing, the automatic closing out of your trade when the margin reached the exhaustion point was the best kind of stop-loss order.” – Jesse Livermore

Back to the original preceding remarks and the first on scalping, surely all scalpers should use stops, how else could you scalp other than on a ‘fire and forget’ system? What would a scalper (using the currently accepted use of the term) be aiming for, perhaps ten pips, then surely a ten pip stop loss is the right mechanism? As for not requiring stops because the market is mostly “stable and unsurprising” ranges can be fairly predictable, in as much as the average range of a currency may be a certain percent per day, perhaps it’s 0.5%. But no one can possibly predict (with any degree of certainty) when market movements will happen beyond the open/close times of certain markets.

All trades should have stops, even if it is only as a disaster back up. If you usually exit using discretion when a trade goes roughly 20 pips against you, then why not set a stop loss at perhaps at 40 pips? This is there only as a backup, if you trade long enough you will have inevitably experience a power outage, internet loss, broker platform crash, etc. You will be glad about this stop some day. Stop-loss orders have other fringe benefit other than those often highlighted. They can also prevent you from waiting “just that little bit longer” to see if price will come back in your favour. Most of us know to never move a SL which is protecting your account and pain threshold.

To finish, the term stop loss can be regarded as too rigid a term. Many traders have several definitions and uses of stop losses and there’s no reason a trader who exercises disciplined money management should not implement and combine several uses;

In a trading environment where most lose (only 20% of retail trades are winning trades) it’s incredibly frustrating to witness comments regarding no stop loss trading. The FX market is no different to any other trading market and successful traders would not ditch the one trading tool that every single sophisticated article written about trading has always implored traders to absolutely use. Experienced and consistently successful traders use stop-losses, they never let bad trades build up on them or get hit with margin calls. If you don’t pull the plug on a trade then your broker might. It’s up to you to decide who you want to be in control of your money.

« “Greek Tragedy”, “It’s All Greek To Me”, The Lame Greek ‘One-Liners’ Are On The Way Back All You Need To Trade FX Is A Couple Of Lines On A Chart »