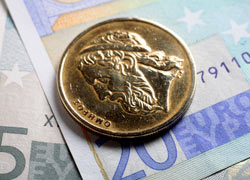 “Greek Tragedy”, “It’s All Greek To Me”, The Lame Greek ‘One-Liners’ Are On The Way Back

It’s been a quiet few weeks with regards to the Eurozone crisis, since mid December the news hasn’t been anywhere near as dynamic or spectacular. Greece, Italy, France, AAA ratings, disorderly break up..all these subjects that were top of the news agenda have slipped down the rolling news reel order. However, if I could be so bold as to mix up two cultures and one legendary playwright let me state; “beware the ides of March”.There is a storm brewing and it has the issue of Greece right in the eye of the storm which is set to hit land and wreak devastation in March. Although the deadline is March 20th early March will reveal the current positions and willingness of banks and bondholders to relent and accept haircuts above 60%.

Hedge funds may take on the IMF over its plan to slash Greece’s debt burden as time runs out on talks. The funds have such a powerful position in Greek bonds they could derail Europe’s hope that bondholders will accept the burden of reducing Greece’s debt voluntary. Bondholders need to give up 100 billion euros of their investment in the planned bond swap, drawn up in October, but many hedge funds plan to sit on their hands.

They’ll either let the country go under, triggering the credit insurance they’ve bought, or hope to get paid out in full if enough others sign up. That puts them in direct conflict with the IMF, which wants to force Greece’s cost of financing down to an affordable level.

Without a deal, the IMF, the European Union and the European Central Bank, the troika, will not pay out the second bail-out package Greece needs to survive. Without the money, the country is likely to default around March 20, when a 14.5 billion euro bond falls due. A deal needs to come well before that, because the paperwork alone takes at least six weeks.

According to the report, the IMF believes Greece will still be sinking under the burden of its debts, further measures may need to be taken if the country is to avoid default. Markets fear this could lead to reopening the October agreement. In a leaked paper in October, the IMF acknowledged that its calculations were erroneous. That would mean lower interest rate payments by Greece, and a far bigger hit for the banks.

The loss for creditors could be near 65-70 percent. In November Greece wanted a 75 percent cut, a far higher number than the low 60s the banks had in mind.

Market Overview
The S&P 500 added 0.9 percent closing at 1,292.08 at 4 p.m. in New York, its highest level since July 29. The Dow Jones Industrial Average increased 69.78 points, or 0.6 percent, to 12,462.47. The Shanghai Composite Index jumped 2.7 percent to extend its biggest three-day advance in 15 months. The dollar weakened versus 15 of 16 major peers. Ten-year Treasury note yields climbed one basis point to 1.97 percent. The S&P GSCI gauge of 24 materials rose 0.9 percent as cocoa, silver and copper rallied more than 3 percent to lead gains.

Oil in New York jumped 0.9 percent to $102.24 a barrel, the first increase in four days, on renewed concern that Middle East tensions will disrupt supplies. Copper advanced 2.8 percent. The euro appreciated 0.1 percent versus the yen. The dollar weakened at least 0.7 percent versus the Australian dollar, New Zealand dollar and Brazilian real.

Economists polled in a Bloomberg survey gave a median forecast of -£2400 million, compared with the previous figure of -£1552 million for the UK trade balance.