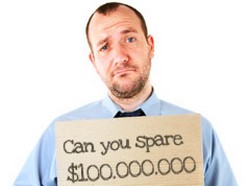 Brother, Can You Spare A Dime?

Brother, Can You Spare a Dime," lyrics by Yip Harburg, music by Jay Gorney (1931)

Despite the bullish news yesterday, that the USA had apparently dodged the bullet of a double dip recession, the latest reports emanating from the US don't quite match the optimism;

A recent study, conducted by Gordon Green and John Coder published by Sentier Research, has uncovered that median annual incomes (adjusted for inflation) dropped 6.7 percent between June 2009 and June 2011, that's more than double the 3.2 percent drop experienced during the recent recession. Real median annual household income is down to $49,909 in June 2011 from $55,309 in December 2007, when the recession began. American households have continued to lose ground even though (apparently) growth resumed. Economic growth in the first half of 2011 has stalled, advancing at less than a one percent annual rate. In the second quarter, consumer spending rose at only a 0.7 percent pace, the weakest since the fourth quarter of 2009.

Corporate failures are beginning to accelerate, with some big-name companies among those struggling for survival. American Airlines may need to go to court to restructure its labor contracts, and Kodak has confirmed that a law firm known for taking companies through bankruptcy has been advising on strategy as its attempts to overcome the loss of its traditional photography business look doomed to failure.

Companies in a range of businesses, particularly service industries such as personal grooming, retail outlets such as restaurants, renewable energy, and the paper industry, have fallen into the protection of Chapter 11 in the USA over the past few months. The weak economy, falling consumer spending and increasingly tight lending practices are also threatening struggling companies in industries as diverse as shipping, tourism, media, energy and real estate. And real estate is still sitting there as the bogey man in the corner that just won't go away. There are several USA states that have house prices close to or back to 1999 levels, and that's a whole lot of trouble sitting there on the Fed's balance sheet as they bought much of this subprime 'junk' off bank's in the previous rounds of QE.

Despite the habit of blame and finger pointing in the direction of Europe or China the corporate failures the USA is currently experiencing is very much a home grown and incubated phenomena. Ten companies with at least $100 million in assets filed for bankruptcy in September, the most since seventeen filed in April, the busiest month since 2009, according to data available from bankruptcydata.com. Recent bankruptcies include glossy magazine paper manufacturer NewPage Corp, (the largest bankruptcy of the year) and the largest non-financial company filing since 2009; Graceway Pharmaceuticals, which makes skin creams; Hussey Copper, which makes the copper bars used in switchboards, and the Dallas Stars of the National Hockey League. Already in October, five companies with more than $100 million in assets have filed for bankruptcy, including the Friendly's ice cream chain and wireless broadband company Open Range Communications.

The bond market is now pricing in a sixty percent risk of recession by way of the bond market indicator that has predicted every U.S. recession since 1970, the so-called Treasury yield curve. Short-term rates have been higher than longer-term yields, or inverted, before each of the seven recessions since 1970. A contraction makes it difficult for the U.S. to reduce unemployment, which has held at or above 9 percent every month except two since May 2009, including a reading of 9.1 percent in September.

The Chinese have even dared to utter the 'D' word in the USA's direction by way of a Chinese-language commentary from Xinhua;

There were similar circumstances in the 1930s. The United States’ economy and the world economy are different from those of the 1930s, but looking back on history would help the U.S. Senate see the problems, contradictions and dangers of the currency bill. China has an old saying that one should use history as a mirror to understand the rise and fall of states. We hope that those American politicians clamouring to force the renminbi to appreciate will absorb the lessons of history and head the voices of reason, and not commit a foolhardy act that will harm their own people and others.

The raft of poor 'recession indicators' are not isolated to the USA, in the UK on Tuesday morning a report cited that an additional 600,000 children will be placed in poverty as average incomes in Britain fall by seven percent between 2009-10 and 2012-13 and the government changes the welfare system. The Institute for Fiscal Studies (IFS) said the fall was the largest for 35 years.

This "unprecedented collapse in living standards" can be attributed to high inflation and weak earnings growth in the aftermath of the deep recession. They also state that reforms proposed by the coalition government would raise absolute child poverty (where the household income is below 60 percent of the 2010-11 median income, adjusted for inflation) by 200,000 in 2015-16 and and 300,000 in 2020-21.

It forecasts that 3.1 million children, or just over 23 percent, of children in Britain will be in absolute poverty by 2013, up from 2.5 million (19.3 percent) in 2010, and 3.1 million will still be in absolute poverty in 2020. This would mean the government would miss by a wide margin its target, agreed in law last year with the support of all the political parties, to slash absolute child poverty to under five percent by the end of the decade.

The latest Quarterly Economic Survey from the British Chambers of Commerce suggests that there is a very real threat of a double-dip recession. After surveying over 6,000 firms, it is claiming that businesses lack confidence and are worried about the problems in the eurozone.

The Q3 QES results point to a deterioration in the economic situation, with concerning signs of stagnation in the domestic economy. The disappointing Q3 balances for exports, and for investment in plant and machinery, suggest that the much-needed rebalancing of the UK economy is not yet occurring. Negative cashflow balances indicate that firms are facing real financial pressures.

The forward-looking home order balances moved into negative territory, for both manufacturing and services, pointing to risks of recession. Although recession can be avoided, on the basis of these results our growth forecasts issued early in September will likely be revised downwards for both 2011 and 2012.

Given the worsening international situation and the acute problems facing the Eurozone, there is a clear need for the MPC and the government to make every effort to avert risks of recession. The recent increase in the QE programme to £275 billion is welcomed, but more radical measures are needed. These should be mainly concentrated on purchasing securitised SME loans and other private sector assets. On its part, the government must reprioritise its spending plans to promote growth and wealth creation.

The thought has occurred to many economists and market commentators that the isolated incidences of economic malaise highlighted above are simply the common currency of the natural ebb and flow of any recessionary times. For example, the UK has experienced eight recessions since world war 2 ended, however, this time it really does feel different. No previous recessions had economists questioning the capitalist system's ability to survive after being rescued with multi trillion dollar rescues.

Records will suggest that the Great Recession started and ended from 2008-2009. Yet in a bizarre twist the cause is attributed to the financial crash of 2007-2010. The peak reduction of GDP, put at 7.1%, is only 'bettered' by the 8% experienced after world war 1. The history books may simply re-write the notes on the Great Recession, citing it started from 2008 and lasted until European and USA govts. eventually and in a united policy agreed to awash the system with capital that eventually reached 'Main Street'. The multi trillion injection catapulted wages and helped to write off the relative and inflation adjusted debts of "ordinary Joe". Whilst huge banks and investment corporations took a huge write down on their loans, bonds and assets of circa 60% the one off re-calibration caused a successful purge throughout the global financial system allowing a re set and order to re occur.

We never see a headline about breadlines today.
And when we see the landlord we can look that guy right in the eye
We're in the money, come on, my honey,
Let's spend it, lend it, send it rolling along!

"We're in the Money," lyrics by Al Dubin, music by Harry Warren (from the film Gold Diggers. 1933)

« What Does Columbus Day and the Napoleon Complex Have in Common? Stuck In A Moment »