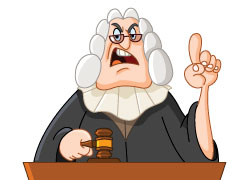 Godwin’s law is a humorous observation made by Mike Godwin that has become an Internet adage. It states: “As an online discussion grows longer, the probability of a comparison involving Nazis or Hitler approaches”. Godwin observed that, given enough time, in any online discussion, regardless of topic or scope, someone inevitably criticises some point made in the discussion by comparing it to beliefs held by Hitler and the Nazis.

There are many corollaries to Godwin’s law. For example, there is a tradition in many newsgroups and other Internet discussion forums that once such a comparison is made, the thread is finished and whoever mentioned the Nazis has automatically lost whatever debate was in progress. This principle is itself frequently referred to as invoking Godwin’s law.

Godwin’s law by proxy refers to when a party employs a comparison to a universally reviled figure rather than Hitler himself. It is a debate tactic common among those familiar with Godwin’s law who seek to evoke a comparison with a commonly held evil without fulfilling the letter of Godwin’s law. Such comparisons include, but are not limited to, Oliver Cromwell, Joseph Stalin, Mao Tse Tung, Pol Pot..

I’ve long held the view for some time that there exists a type of Godwin’s law by proxy on trading forums, at some stage, devoid of any evidence to the contrary, opponents of indicators will discredit themselves and reveal their level of ignorance by blurting out the statement ‘indicators don’t work.”

There are many stages in a fledgling trader’s development, one is undoubtedly the ‘wide eyed’ time when they first discover indicators, the mathematically pure measurements of price behaviour that could possibly unlock trading success and wealth. As to whether or not indicators ‘work’ is a debate for another day, you can gauge my thoughts as to the value of indicators in a previous article penned for FXCC titled; “indicators never work, except when they do, which is all the time”. Or you could register on a trading forum and if in need of some attention start a thread titled; “I’ve just started using the MACD, wow, where has it been hiding all my trading life?” Let’s know how that works out for you and how quickly you invoke the trading industry’s version of Godwin’s law.

My first discovery of indicators was watching what price did when it ‘hit’ certain moving averages, or what I considered to be at the time ‘inflection points’. I was later to discover that these rough inflection points were in fact levels that corresponded to resistance and support and key Fibonacci retracements. I’ve never felt embarrassed to admit that I found the initial discovery of indicators fascinating and to this day ‘levels trading’ still forms the cornerstone of my successful FX trading. Resistance and support (the three levels), the daily pivot, Fibonacci and the 200 ma forms the basis of my ‘edge’ to either swing or intra-day trade the main spot forex currency pairs. Despite this arguably being were Market Makers and movers will make decisions, for example the 200 ma, I’ve never lost the fascination for trading indicators.

As a consequence of being intrigued by the maths involved I tried as many conceivable indicators, singularly or in a combination, over a period of three to four years as I could find. This led me to the conclusion covered in the article previously mentioned; that all indicators ‘work’, all of the time. That doesn’t mean you’ll enjoy a 100% success rate on any indicator based method, you have to be aware of how and what is the information generated and use indicators as a method to underpin your sound money management and strong psyche. My belief remains steadfast that method (using indicators or not) still ranks third behind your sound MM and your healthy trading mind of the 3Ms.

One common mistake I was guilty of during my investigations was duplication, typically I’d duplicate moving average oscillators, momentum oscillator indicators and trend indicators as part of the same strategy. This also lead to discoveries with regards to what was a “lagging” and what was a “leading” indicator, a subject we’ll cover at a later date. One of the most common mistakes, and I use the word “mistake” reservedly given any experimentation with indicators reveals a very healthy trading intellectual curiosity, is to use two momentum oscillator indicators were one will suffice. For example I tend not to use the stochastic, preferring to use the RSI (relative strength indicator). However, it must be stressed that this is personal preference as opposed to any ‘lack of faith’ in the mathematical purity of stochastic and the overall point is to stress you don’t really need to use more than one momentum oscillator indicator. This choice extends to trend indicators, for example, the parabolic stop and reverse (psar), the directional index and Donchian channels can generate similar signals. Similarly moving average oscillators can often be duplicated, the MACD, and the CCI (commodity channel indicator). Lastly duplication could also occur if using average true range or Bollinger Bands to measure volatility.

As if by accident as opposed to design technical traders tend to eventually filter their indicator choices to take one from each of the main groups, to form their method or strategy. Typically the four groups they’d choose from would be; Moving Average Oscillators, Trend Indicators, Momentum Oscillators and Volatility Indicators.

Looking at a four indicator combination a trader could perhaps develop a method based on using ; the MACD, the Directional Index, the RSI and the average true range. Although arguably duplication with the DI you could also use the PSAR as a metric to manually move your trailing stop. Such a four – five indicator based strategy is not uncommon, neither should it be considered too busy or over the top, particularly if utilised in a swing or position strategy whilst paying keen attention to the key levels of: support, resistance and the 200 ma.

During my investigations and odyssey into indicators and their use I came across a suggestion to use a four trading tool technique, the suggesting being that there were four key indicators that traders must know. They were defined slightly differently (more simplistically) to how we commonly refer to them.

Here’s a straight forward trading example of how this could work on a long trade and I’ll deliberately select the simplest of indicators for the overall strategy and the suggestion is to use the strategy to take trades off a four hour chart. Take on board that this is only scratching the surface as a suggestion as traders may have wildly differing opinions as to indicator settings, time frames, stops and take profit order limits. The suggested settings are standard, the stop is the LL (lowest low) of the what we determine as the turning point.

No.1: fifty/ hundred day moving average cross over
No.2: MACD left on its standard settings
No 3: RSI
No 4: Bollinger Bands

Although there is no number five you could also add a trailing stop by way of input into your trading platform or manually adjust and trail price as suggested by use of the psar. So what would be our entry point to, for example, go long with this strategy and what would be a suggested exit strategy?

To enter we’re looking for the 50 ema to cross the 200 ma, the MACD to cross the zero line, the RSI to cross the fifty line (having come out of the oversold area of 30). The trader should consider taking some of the profit if price reaches the upper band of the Bollinger bands or exit at such point or if the take profit limit target has been hit.

It must also be recognised that indicator based strats have an inherent quality that is often missed by the Godwin’s law forum crowd, trading using indicators instils (by proxy) strict money management and discipline as part of the defined trading plan any professional trader should have created and stick to. Using the four trading tool rules and only entering when all conditions are met, can greatly enhance a trader’s probability of success.

« Will France's Credit Rating be Targeted Irrespective of any Eurozone Solvency Solution? Eurozone Crisis, It's As Clear As Mud »