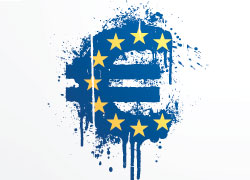 Eurozone Crisis, It's As Clear As Mud

No sooner had the grand plan to rescue the Eurozone been touted it was summarily squashed and just when you think the French and German leaders couldn’t possibly fit in another meeting Sarkozy thanks his wife for giving birth and hops onto a plane to Berlin. Quite why he and Merkel can’t use Skype remains a mystery.

Apparently France and Germany are at odds as to how to increase the firepower of the bailout fund. Now weren’t we here on Monday, and last week and the month previous? It’s getting to the stage were it’s beyond a farce and ‘the markets’ cannot possibly keep buying this hollow rhetoric.

Whatever outcome after this coming weekend’s meeting of meetings one thing’s for sure, rumours from the FT are no more reliable than the Guardian’s conviction on Tuesday evening that the deal was done, although to be fair the FT rumours create more of a spike in the main markets.

So, a quick round up of the opinions of those involved in the decision making process leaves the situation as clear as usual, as clear as mud that is. Asked if an agreement had been finalised Jean-Claude Juncker, chairman of the Eurogroup, the de facto euro zone finance minister, replied; “We’re still in meetings Saturday, Sunday.”

Merkel warned that leaders would not solve the debt crisis at a single meeting and reiterated that the issues would not be solved in “one stroke. If the euro fails, Europe fails but we will not allow that,” she said in Frankfurt.

“We’re trying the whole time,” EU Economic and Monetary Affairs Commissioner Olli Rehn stated after the Merkel-Sarkozy meeting, when asked about reaching an agreement at the weekend summit.

“You know the French position and we are sticking to it. We think that clearly the best solution is that the fund has a banking license with the central bank, but everyone knows about the reticence of the central bank,” French Finance Minister Francois Baroin told reporters in Frankfurt. “Everyone also knows about the Germans’ reticence. But for us that remains the most effective solution.”

Finland’s Prime Minister Jyrki Katainen appeared to lower expectations, telling public broadcaster YLE he did not believe Sunday’s summit would resolve the euro zone debt crisis. “I don’t believe that such solutions could be made on Sunday that would fix everything. But I’m certain that there will be decisions that point to the right direction,” he said in a broadcast on Wednesday.

Furious protesters are determined to bring Greece to a standstill on the second day of the general strike on Thursday, lawmakers will vote on the details of the unpopular austerity package needed to stave off default and ensure the next tranche of bailout cash is delivered. Greece’s Parliament is expected to vote yes to the plan required by the EU and the IMF, after backing it in principle in a first reading on Wednesday.

However, certain ruling party MPs have warned they may vote against the bill’s most controversial aspects, potentially weakening the government’s narrow four vote majority. Riot police will once again be deployed in central Athens after indignants clashed with riot police on Wednesday during an anti-austerity march that drew more than 100,000 protesters.

The Greeks do have inverse support and perverse solidarity from a diametric source; a total of 80 percent of Germans oppose making any personal financial contribution to help Greece, according to a Sept. 21 Forsa poll for Stern magazine. An Allensbach survey for the Frankfurter Allgemeine newspaper on Oct. 19 showed only 17 percent of Germans saying they trust the euro with 75 percent saying they don’t trust it.

Just how sensitive the markets have become to rumours and titbits of information was once again amplified by the late sell off as a consequence of cracks appearing in the solution that is yet to be ratified. The SPX closed down 1.26%. European bourses had held up prior to the latest Euro wobble, the STOXX closed up 1.01%, the FTSE closed up 0.74%, the CAC closed up 0.52% and the DAX up 0.1%. The FTSE equity index future is currently down 0.77%, Brent crude suffered a minor collapse in late trade. Futures on crude oil dropped 2.6 percent to $86.05 a barrel in New York after gaining as much as 1.3 percent earlier in the session.

Currencies
As a consequence of new doubts emerging with regards to the commitment and unity of the EU leaders the euro erased its gains versus the dollar and yen. The euro was little changed at $1.3760 at 5 p.m. New York time after rising 0.9 percent earlier in the day. Europe’s currency traded at 105.69 yen after increasing 0.8 percent earlier to 106.54. The dollar was little changed at 76.81 yen. Canada’s loonie fell 0.6 percent to C$1.0205 per U.S. dollar by 5 p.m. in Toronto. It touched C$1.0085, close to the highest point since Sept. 21. One Canadian dollar currently buys 97.99 U.S. cents.

Economic data releases for the morning of 20th October.

The only major data release for Europe tomorrow morning will once again be overshadowed by the looming macro economic events. However, with large retail outlets such as the UK’s Argos chain already citing that profit has fallen by a massive 93% retail sales figures may fall way short of expectations. A Bloomberg survey of economists showed a median forecast of 0.0% compared with last month’s figure of -0.2%. A similar Bloomberg survey predicts a year-on-year figure of 0.6% compared with last month’s 0.0%. Excluding autofuel the figure was expected to be 0.2% month on month from -0.1% previously and 0.6% year on year from -0.1% previously.