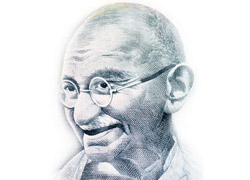 A Man Is But The Product Of His Thoughts

“A Man Is But The Product Of His Thoughts. What he thinks, he becomes.” – Mahatma Gandhi

In an earlier article we discussed the ideas behind the concept of choosing a trading strategy to match our personality type. The perceived wisdom is that if you’re an impatient ‘action junkie’ you should trade lower time frames, if you’re laid back and patient perhaps the higher frames would be best suited. The standard recommendation is to conduct a short self analysis such as this;

Are you a hyper energetic person who loves excitement and speed but you have a low patience level? If so, then perhaps a Day Trading System or a Penny Stocks System would suit you. With this type of trading a full time commitment is required.

Are you a laid back, easy going person who takes a long-term outlook on life and has a high threshold of patience? Then you may be more suited to a Trend Trading or a Value Investing trading system.

Do you have a personality somewhere in between both posts? Perhaps being a Swing Trader, or developing a Breakout Stock Trading system would suit you best.

So there you have it, figure out your personality, pick one of the three key trading methods, then pick the appropriate time frame and life will be a bowl of cherries as you have them peeled for you on the deck of your Sunseeker Manhattan..

Well as with all trading matters it’s never quite that straight forward and let’s just throw a curve ball aimed squarely at the perceived wisdom;

I’m fond of sporting analogies so please allow me to indulge by using football. Leaving aside the fact that you might not have had the breaks to make it at the highest level (luck and being in the right place at the right time plays as much a part in life as in trading), you can either play the game at a decent level or you can’t.

If you can play at a decent level you can generally fit in and cover on most areas of the pitch. That’s not to say Messi could play at centre half but I’ll bet he could fill in at full back if necessary, or midfield if Barca ever needed to do the unthinkable and protect a lead. Similarly Rooney has been excelling in midfield for his club lately and loves putting on the gloves and playing at being goalie in training, apparently he’s superb and if his club needed it he’d be fighting the captain to go in goal in a game if an emergency situation arose.

The point I’m making is that you’ve either developed a high degree of competency in your profession or you haven’t, you develop the competency and then specialise you shouldn’t specialise first based on a hunch or a preference based on very little evaluation. Using the football analogy just one more time how often do we hear of a winger or midfielder being converted to a striker because a coaching genius recognised an X factor that others has missed, Wenger with Thierry Henry? A world class athlete who slightly modified his game to become a world class striker.

So how do we relate this sport analogy to trading and in particular which trading style we eventfully adopt? Well firstly you need to immerse yourself into your profession in order to discover the methods you prefer as opposed to assuming your personality type and immediately matching a trading style accordingly. However, there’s a more fundamental issue at play here that many miss; you won’t suddenly become a ‘good trader’ because you move down to scalping or up to trading off the daily charts, you’ve either developed a high degree of competency or you haven’t. Simply changing your style or adapting time frames is as unlikely to provide a Eureka moment as finding that ‘magic indicator’, you’ve either developed the all round competence to trade or you haven’t.

Most successful traders have taken years to arrive at their destination, along the way they’ll have experimented with many strategies across many ‘time frames’ but most would testify they could be successful working off whatever charts using whatever strategy they had to. They don’t match the trading method to their personality, they’ve identified, through a process or trial and error, what method of trading they prefer. But just like Rooney, if you asked them to immediately adapt their edge, to pick up the metaphorical gloves and keep goal, they’d do it very well, they’d enjoy the challenge and thrive..still not too sure about Messi at centre half though..