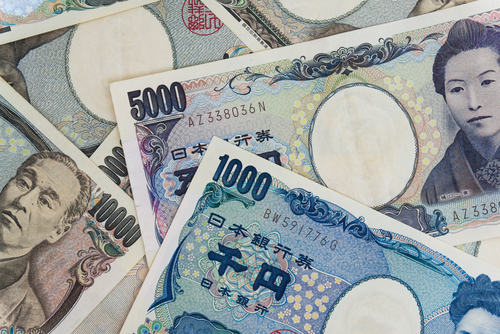 As the second/third largest manufacturer on the planet and arguably number one in terms of practical, high end manufacturing, Japan’s manufacturing and export data is often regarded as a measure, to gauge the overall health of the global economy. During Wednesday’s Asian trading session, the latest export and import data was published for the Japanese economy. Exports have fallen by -8.4% yearly up to January, whilst imports have fallen by -0.6% YoY up to January. The trade deficit worsened to ¥1452b up to January.

In an economy so reliant on manufacturing and export, that has: a 253% GDP v debt ratio, GDP growth of 0.00% and inflation at 0.3%, it’s clear to see why the Bank of Japan Governor Kuroda broadcast a dovish policy statement earlier in the week. He suggested the central bank could increase and or extend its ultra loose monetary policy, including taking the borrowing rate deeper into ZIRP; below the current -0.1% rate, whilst injecting more liquidity into the financial system (and indirectly the domestic economy), by way of Q.E. and bond buying. USD/JPY fell during the Asian session and early part of the London session, as the export, import data was released and its impact judged by FX analyst and traders; at 9:00am U.K. time USD/JPY traded up 0.23% at 110.8, after breaking up through the first level of resistance R1. EUR/JPY followed a similar pattern, the cross currency pair traded up 0.28% at 125.7, also breaching R1.

Sterling behaved in a curious manner during Tuesday’s trading sessions, reacting positively to news that prime minister May is off to Brussels, to apparently inform E.U. negotiators that she’s prepared to remove the removal of the backstop, in order to try and move the withdrawal agreement impasse along. Whilst a former high ranking E.U. official, Manuel Barossa, who was previously the 11th President of the European Commission, suggested that the E.U. would extend the article 50 exit beyond March 29th, this statement might have also caused sterling to rise versus its peers on Tuesday.

The presumption is that the E.U. won’t have noticed that Mrs. May’s new plan B is simply the original plan A, that was already agreed. FX markets are reactive and not necessarily predictive, therefore, sterling gave back some of Tuesday’s gains during Wednesday’s Asian and London trading sessions. FX analysts and traders began to wake up to the realisation that no progress is likely to be made, during Mrs. May’s meeting with Mr. Juncker, in Brussels today.

Mr. Juncker also questioned the reason why the U.K. prime minister keeps asking for meetings, when the withdrawal agreement will not be reopened. Suspicions are (once again) being circulated, that the U.K. govt. is simply using the meetings as window dressing and public grandstanding, to deliver an impression that they’re working hard, to find a solution, as she winds the clock down to no deal. Sterling FX traders will be wise to the fact that the U.K. will be exiting the E.U. on March 29th, unless an extension is requested. At 9:30am U.K. time, GBP/USD traded in a tight range on the 1.300 handle, but down 0.27% on the day, whilst other sterling pairs experienced a similar pattern; EUR/GBP traded up 0.28% at 0.870.

European news centred around the latest producer prices from Germany; year on year up to January, prices have risen by 2.6%, beating the forecast of 2.2%. This metric could be regarded as bullish for both the German and wider Eurozone economy, whilst it might also lead to a moderate increase in inflation, which in Germany and the E.Z. is currently languishing below the ECB target of 2%. European equity indices traded up during the early part of the London-European trading session; U.K. FTSE 100 up 0.17%, DAX up 0.42% and CAC up 0.10%. The euro traded up versus the majority of its peers and at 10:00am U.K. time EUR/USD traded up 0.10%, whilst versus both Australasian currencies, the Kiwi and Aussie, the euro had advanced by circa 0.25% in the London session.

The USA-China negotiations will continue to take place in Washington on Wednesday, after news broke via Bloomberg on Tuesday evening, that the USA negotiating team has requested the Chinese central bank, the PBOC fix the value of the yuan, to ensure any trade deal both parties reach, isn’t corrupted by a lowering of the exchange rate. A peculiar demand given that a stronger dollar v yuan would ensure that the USA pays less for imports and can therefore reduce the balance of payments deficit more rapidly, if the USD/CNY value remains high. The futures markets were indicating a negative open for U.S. equity markets, when the New York session begins. At 10:00am U.K. time the DJIA future index was down -0.14% and the SPX down -0.12%. The FOMC will publish the minutes relating to their January rate setting meeting, on Wednesday evening at 7:00pm U.K. time. FX traders are advised to monitor this event carefully, due to its historical power to move the market in the U.S. dollar.