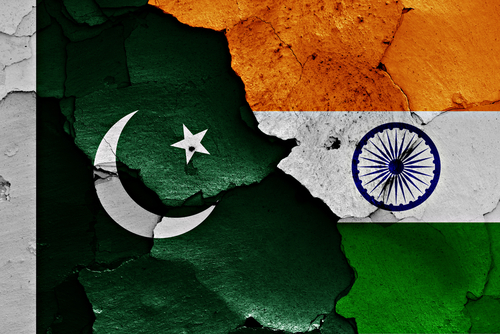 Japan’s yen and the USA dollar, both rose marginally versus their currency peers during the Sydney-Asian session, as two Indian warplanes were reported to have been shot down by Pakistani forces. This escalation came after India carried out incursions into Pakistan airspace on Tuesday, in order to eliminate what the Indian armed forces believed to be militant forces, carrying out attacks in India. The Karachi stock market closed down 2.29%, whilst India’s Sensex was close to flat.

Market participants are hoping cool heads will prevail and the situation between two nuclear armed powers, who make no attempts to hide their mutual disdain, will deescalate quickly. Japan’s yen, viewed as the reserve currency for Asia, rose moderately versus: EUR, GBP, USD and rose significantly versus both Australasian currencies, the kiwi and the Aussie. Yen rose significantly, AUD/JPY traded down 0.38% at 9:00am U.K. time. Both the kiwi and Aussie were down versus USD, due to fears that the India-Pakistan spat could impact on Asian trade.

GBP/USD rose during the early part of the London-European trading session, by 9:00am the currency pair referred to as cable was up 0.15%, maintaining its position above the 1.3200 handle, at 1.326. The major pair is currently up 1.46% weekly and up 0.45% monthly. Optimism regarding the ultimate Brexit outcome still remains high, despite the only achievement registered over recent days, involves prime minister May deferring to agree for a vote to extend the U.K. exit on March 29th by two months, if no withdrawal deal is voted through Parliament on March 12th. FX traders who prefer to trade sterling pairs, need to remain constantly vigilant, regarding breaking Brexit news.

Looking at European indices, at 9:40am the U.K. FTSE traded down 0.69% just above the 7,100 handle, reducing the YTD 2019 gains to 5.74% and the monthly gains to 4.29%. Germany’s DAX traded down 0.64% and France’s CAC down 0.31%. The euro made little progress versus the majority of its peers. EUR/USD traded close to flat at 1.139, whilst EUR/GBP kept position at its 21 month low of 0.857, down 0.15% and down 1.12% weekly. Wednesday is a quiet day for economic calendar news relating to Europe and the Eurozone. The key readings to be published include sentiment and confidence readings, publications which are unlikely to impact on the euro, unless the metrics miss, or beat the expectations, by some distance.

The leaders of North Korea and the USA are due to meet in Hanoi today, Trump and Kim Jong Un are meeting to apparently diffuse nuclear tensions, which only manifested after Trump’s inauguration. Creating a problem which you then diffuse and take the credit for, appears to be a habit for this administration, the China-USA trade war being the glaring example. The summit diversion in Vietnam could have been timed to avoid focus remaining on the statements scheduled to be delivered by Trump’s former personal lawyer Mr. Cohen today in Congress, which he has promised to back up with documentation.

These devastating admissions could harm the presidency, leading to possible claims for impeachment and cause a ripple effect in the value of USA equity markets and the value of the dollar. At 10:00 am U.K. time, futures markets were indicating opening losses once the New York session commences; the DJIA future was indicating a fall of 0.30% and the NASDAQ a fall of 0.31%. The dollar index, DXY, traded close to flat at 95.57, failing to hold the 96.00 handle, where the index has remained over recent sessions.

There’s a raft of economic calendar data relating to the USA, which will be published during the New York session, analysts and FX traders will closely watch the advanced trade goods balance, forecast by Reuters to come in at -$74.1b for December. Once again, illustrating just how precarious the trade deficit the USA runs with its global partners is, despite the dollar rising in value as the FOMC/Fed raised rates three times during 2018.

Jerome Powell, the Fed chair will deliver another testimony in front of a Washington committee up on Capitol Hill today, it’s the semi annual address to the house panel, presumably his narrative will be similar to his statements before the Senate panel on Tuesday. Crude oil inventories will also be published on Wednesday afternoon, which could impact on the value of WTI oil. Meanwhile, analysts and FX traders will begin to concentrate their collective minds on the latest GDP growth figures for the USA, which will be broadcast tomorrow, Thursday 28th. Reuters are forecasting an annualised fall in Q4 2018 to 2.5%, from 3.4% in Q3.

« Euro falls to a 21 month low versus sterling, GBP/USD reaches five month high, USA equity markets tread water The latest GDP figures for the USA could impact on FX markets if analysts and FX traders have overlooked the predictions »