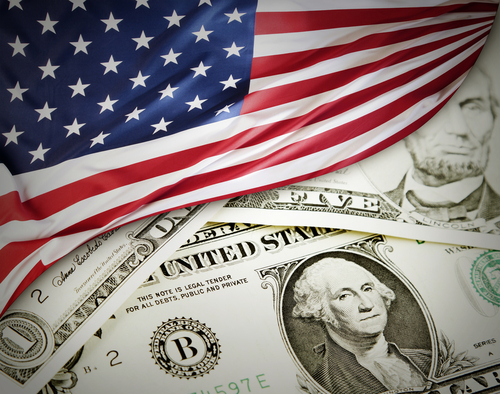 Feb 27 • Forex Trading Articles, Market Commentaries • 969 Views • Comments Off on The latest GDP figures for the USA could impact on FX markets if analysts and FX traders have overlooked the predictions

On Thursday February 28th, at 13:30pm U.K. time, the latest annualised QoQ Q4 figure for USA GDP growth will be published. According to the Reuters forecast, after they’ve recently polled their panel of leading economists, the headline GDP figure is expected to fall from 3.4% recorded in Q3, to 2.5% for Q4. Such a fall, if the forecast is met, can’t be attributed to seasonal factors, instead analysts may attempt to put the blame on the China-USA trade and tariff war, which appeared to severely impact on the value of USA equity market indices, during the month of December 2018, when the indices experienced a technical correction, across the board.

The latest GDP figure for the USA economy will come during the week Jerome Powell has delivered statements and testimony to the USA lawmakers up on Capitol Hill Washington. During Tuesday’s testimony, he suggested that the USA Labor market wasn’t as robust as the key data indicated, whilst economic growth was slowing, indicating that he was in no rush to encourage his fellow FOMC committee members, to raise interest rates “anytime soon” in 2019.

The release of GDP data for any major economy, can have a profound impact on the value of the relevant domestic currency. The release of the USA GDP data is one of the most closely watched, high impact news events, particularly if the forecast is for a major divergence from the previous and most recent readings. Therefore, FX traders who specialise in trading USD, would be advised to monitor the value of the greenback as the GDP figure is published, being mindful of sudden spikes, movements and changes in liquidity.

The Swiss also reveal the latest GDP figure on Thursday morning at 6:45am U.K. time, the Reuters forecast is for the annual rate in Q4 2018 to have fallen to 1.70%, from 2.4%. Quarter 4 is predicted by Reuters to have improved to 0.4%, from the -0.2% figure registered in quarter 3. It must be noted that the Swiss currency is part of the basket of currencies which comprises the dollar index, the DXY. Moreover, USD/CHF is one of the top five currency pairs traded on foreign exchanges. The Swiss franc, the CHF, is still regarded as one of the globe’s most stable currencies and is also what’s referred to as a “safe haven” asset in times of economic global tumult, whilst the Swiss banking industry is still highly respected. Therefore, any rapid change in the GDP growth of this European country, can have repercussions in the value of the Swiss franc and affect overall, global, economic confidence.