Oct 15 • Between the lines • 3108 Views • 2 Comments on When trading the markets is it better to have a loser’s mentality rather than a winner’s mentality? 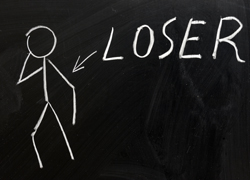 We’ve all seen those “you can be a winner in FX trading with the right mentality” articles on broker websites and on trading forums. They’re generally penned with a motivational style approach and usually accompanied by images of well dressed, clean cut, good looking traders, giving each other a ‘high five’ over banks of computers as they celebrate their latest success…

Let us stress at the outset of this article there isn’t anything ‘wrong’ with having that “never say die” optimistic attitude in trading, it’s a truism that you have to stay the course in this industry in order to succeed and it’s a long course, particularly for part time traders. So having a steely determination to go the distance is essential given that the distance can be measured over years before all the learning and experience finally morphs into the first real tangible signs of success in your trading account.

But brokers and website owners would do well to ‘dial down’ the motivational speaker approach and concentrate on the realities. Unfortunately, for many website owners, publishing realities doesn’t pay the bills and that’s why we tend to see a disproportionate amount of ‘winners’ mentality’ type of articles.

What if we turned the tables on the winners’ mentality belief and began to suggest that a “loser’s mentality” was in fact more appropriate given that it would arm our retail trader with the necessary armored emotional protection required from day one? Let’s try and explain…

Imagine when you’d started out in trading if a mentor sat you down and had a frank ‘intervention’ style talk with you. Imagine them telling you that trading was going to really hurt; it would hurt your bank balance, it would hurt you emotionally and at times you’d experience feelings of physical pain and nausea.

This mentor continued by telling you that were going to lose, in fact you’re going to lose a lot, you’d have more losing trades than winning at the outset and that losing is a huge part of trading that you’d better get used to. In fact he’d go so far as to suggest that you’d have to learn to love your losing trades, you’d have to embrace that losing experience and if you couldn’t you’d really struggle to move on in this industry.

Now looking back, from a platform of some experience, would it have been beneficial had a mentor sat you down and had that type of Fatherly chat at the outset? For sure, it would have prepared you far better for some of the pain and frustration you never knew you’d experience.

Losing is one of those taboo subjects that we don’t discuss enough in trading, we certainly don’t discuss it early enough which tends to lead to traders to commit a form of trader ‘self harm’ early on in their fledgling trading careers. Being told from day one that a winning rate of 50:50 can be looked upon as a success is a complete anathema to the vast majority of new traders.

As we’re prone to mention, losing in an industry that we gauge success very clinically with winning and losing trades, is counter intuitive to how we’re hard-wired. In previous articles we’ve also mentioned a trading mantra; ” look after your losers and the winners will take care of themselves”. We’ve also, in previous articles, mentioned how professional money managers go about looking for winning systems, traders and funds to invest in; the bottom line is they want to know about the risk. The leading questions may typically be; “how much of my investors funds can I lose by investing in this guy, the system, his fund?” rather than be hypnotized by tales of riches which they’ve undoubtedly heard many times before.

Accepting your losses, as part of the price of doing business in our business, is a phenomena that if tackled head on and early enough will create good trading habits. Traders can, as part of their trading plan, firstly place limits on their losses and attach other losing metrics to ensure that they stay the right side of their equity curve.

The first losing mentality step is to decide on your losing limits. The loss per trade, the loss per day, the accepted loss per month and the overall drawdown you’ll experience before terminating your current system and going back to the ‘drawing-board’.

Learning to love your losses

The next stage in learning to love your losses is witnessing how they form part of your trading history, and how spotting your losses and accepting them is in fact a step in the right direction of our trader’s enlightenment. Consider this…

You accept that your overall trading method has an expectancy of a 50:50 win rate and you aim for a 1:2 return on each trade, although your trades more often than not don’t actually reach this individual trade target. You’re predicting that you’ll take ten trades on the Eurodollar this week, the EUR/USD…

It’s now Wednesday, you’ve already had three wins in series, and you’re beating your expectation by some margin as you’ve taken five trades with four winners. However, this latest trade you’re in, the sixth, is looking a bit sick, you’re anticipating taking a loss, thereby taking the win loss ratio down to 4:2. Sure enough you’re trade is closed out (by hitting your stop) for a loss.

Tomorrow’s another day. The next trade you take on the Thursday (as per your trading rules you’re limiting your trading set ups to two a day) also fails, your win loss ratio is now 4:3 for the week. Could you now break even, in terms of your win loss ratio over the week, if your next trade, the eight is also a loser? Sure enough the eighth trade of the week taken on the Thursday afternoon fails, your win rate is now 50:50 for the week.

Now given you’ve just experienced three losses in a row you take a look at your trading record to check just how common this is. You already have a reasonable feel that three losses and or three winners in series is quite common and sure enough as you look at your trading record on your broker’s platform you clearly see that runs of two losses and wins, three losses and wins, even five winners in series is not uncommon, however, your system always appears to revert to a mean of approximately six wins out eleven trades.

Therefore you expect your system, that you have operated successfully for circa twelve  months, to revert back to that mean average and in order to achieve that mean average requires taking losses, however small they may be, or if they hit a pre determined stop loss. Can you see what we’ve achieved by adopting a ‘losing mentality’ and forensically analysing our trades?

We’ve set out a trading plan that concentrates on its performance reverting to a mean of a circa 50:50 win loss ratio. At the outset we know that, for our plan to ‘work’, we’re anticipating losing approx fifty percent of our trades, we therefore have to have a mental framework that accepts, moreover begins to embrace, losses as part of the probability mechanics that make the overall system profitable. Who’d have through that adopting a losing mentality could work so well? As with many aspects of trading turning conventional wisdom on its head can often work.

« President Obama; “if GOP can’t resolve debt standoff, we stand a good chance of default” Morning rally pushes Germany’s DAX to a record high, while France’s CAC is at a five-year high. »