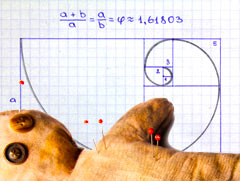 Voodoo or Juju? The Mystical Nature of Fibonacci

Like followers of religious cults there are traders and analysts utterly devoted to their views on certain indicators or patterns. There is one 'indicator' that, irrespective of its proficiency, manages to capture your imagination far more than those invented in the late twentieth century by esteemed mathematicians and statisticians. This indicator pre dates, by some considerable margin, anything we've come to accept as a modern financial market. To say that no one quite knows why or how Fibonacci retracement actually 'works' in trading is a massive understatement and if you admit to actually using Fib in your trading you're often met with a combination of scepticism and bewilderment.

There are beliefs that in fact 'Fibs' only work as a self fulfilling prophecy; because they're so widely used and correlate closely to support and resistance that gives them an edge. But there's another theory on why Fibs work and it's a bit 'trippy', it has to do with the re-occurrence of Fibonacci numbers and sequence in nature. Many analysts and traders will point to Fib, point to the randomness of the markets, the infinite possibilities that price can move in any direction at any given time and wonder if there's isn't actually some universal consciousness at play.

Fibonacci sequences appear in many biological settings. For example, in two consecutive Fibonacci numbers, such as the branching in trees, the arrangement of leaves on a stem, the fruitlets of a pineapple, the flowering of artichoke, an uncurling fern and the arrangement of a pine cone. The Fibonacci numbers are also found in the family tree of honeybees, according to the following 'rules'; if an egg is laid by an unmated female, it hatches a male or drone bee. If, however, an egg was fertilised by a male, it hatches a female. Thus, a male bee will always have one parent, and a female bee will have two. If the ancestry of any male bee is traced, he has 1 parent, 2 grandparents, 3 great-grandparents, 5 great-great-grandparents, and so on. This sequence of numbers of parents is the Fibonacci sequence.

Not convinced by the honeybees? Then let's use two other examples to demonstrate the 'wow' factor. Sunflowers and ferns.

The sunflower is the perfect example of the Fibonacci sequence and the corresponding "golden ratio" appearing in nature. The florets are arranged in a spiral pattern both in a clockwise and counterclockwise fashion. There are 34 spirals that turn clockwise and 21 spirals that turn counterclockwise. The counter-clockwise spirals appear to grow according to the golden ratio. An approximate measure of this is that the radius of the spiral doubles with every 90° of rotation.

Spiralling growth also occurs on the stems and branches of plants. Ferns were the first land plant to use vascular structures. The fern branch uses a fractal pattern of growth, each smaller branch resembles a copy of the whole. Fern branches do not have spiralling growth, but the branch growth from the trunk of a fern tree does.

Leonardo Fibonacci, most commonly referred to as Fibonacci, lived from 1170-1250. He was an Italian mathematician, considered to be "the most talented western mathematician of the Middle Ages." Fibonacci is best known for the spreading of the Hindu-Arabic numeral system in Europe through the publication in the early 13th century of his Book of Calculation, the Liber Abaci; and for a number sequence named after him known as the Fibonacci numbers, which he didn't discover, but used as an example in the Liber Abaci.

In the Liber Abaci (1202), Fibonacci introduced the modus Indorum (method of the Indians), today known as Arabic numerals. The book advocated numeration with the digits 0–9 and place value. The book illustrated practical uses of the new numeral system; using lattice multiplication and Egyptian fractions, applying it to commercial bookkeeping, converting weights and measures, calculating interest, money-changing, and other applications. The book was well revered throughout educated Europe and had a profound impact on altering European thought and consciousness.

Liber Abaci posed and solved a problem involving the growth of a population of rabbits based on idealised assumptions. The solution, generation by generation, was a sequence of numbers later known as Fibonacci numbers. The number sequence was known to Indian mathematicians as early as the 6th century, but it was Fibonacci's Liber Abaci that introduced it to the West.

Fibonacci retracements are a method of technical analysis for determining support and resistance levels. They're named after their use of the Fibonacci sequence. Fibonacci retracement is based on the simple concept that markets will probably retrace a predictable portion of a move, after which they will then continue to move in the original direction.

Fibonacci retracement is created by taking two extreme points on a chart and dividing the vertical distance by the key Fibonacci ratios. 0.0% is considered to be the start of the retracement, while 100.0% is a complete reversal to the original part of the move. Once these levels are identified, horizontal lines are drawn and used to identify possible support and resistance levels. These S&P levels relate to 61.8% 38.2% 23.6% retracements.

Price will often pull back, or retrace a percentage of the previous move before reversing. Fibonacci retracements often occur at four levels: 23.6%, 38.2%, 50%, and 61.8%. Actually, the 50% level has no relation with Fibonacci, traders use this level due to the tendency of price to reverse after retracing roughly half of the previous move. When you draw a fib grid on a chart, you'll notice that the grid lines up roughly with support and resistance areas. Therefore you don't need to draw the S&R lines. Instead, you could just look at a chart and estimate where the levels are.

There is one key issue with Fibonacci which renders it far more useful for swing and position trading as opposed to intraday trading. In fast moving markets (working off lower time frames) it's extremely difficult to pick the top and bottom of the recent moves, but for swing trading it's relatively straight forward and most charting packages will 'auto write' Fib for you. As with all indicators, despite its 'charm' using Fib still requires sound money management and discipline to make it work. You don't have to think that deeply when using it, but deep thought is what caused the Fibonacci sequence to be discovered, and no traders ever failed through applying deep and intellectual curiosity to their trading.

A demo forex trading account is the best way to familiarise yourselves with the concept of Fibonacci indicators. Trade in a zero-risk environment and see the Voodoo happen