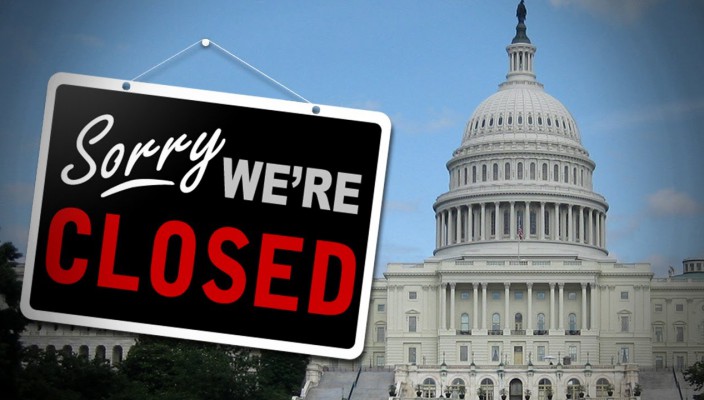 USA equities spike to record highs as Federal government spending shutdown is overcome, GBP/USD rises to near the 1.400 handle, due to Brexit optimism

Jan 23 • Morning Roll Call • 1609 Views • Comments Off on USA equities spike to record highs as Federal government spending shutdown is overcome, GBP/USD rises to near the 1.400 handle, due to Brexit optimism

Investors in U.S. markets have ignored the Federal government shutdown; the DJIA and SPX rose to record highs as the first day of the shutdown began on Friday, the general mood of optimism continued through to Monday, as U.S. markets reached new record highs. The DJIA closed up 0.55% and the SPX up 0.81%, with the tech index (the NASDAQ) rising by 0.98%. The deadlock was overcome by a Senate vote on Monday evening, with emergency funding now extended for another three weeks, when presumably the USA Congress (Senate and House of Representatives), will experience the whole unedifying process once again.

The current Federal debt immediately rose once the agreement was reached, to exceed the previously agreed $20.5 trillion level. As news of the agreement filtered through to the FX markets, the only discernible impact on the major USD currency pairs saw USD/JPY rising through the first level of resistance. The dollar index fell by circa 0.2% on the day. Gold traded in a narrow range throughout the day, closing out circa 0.1% up, at $1,333 per ounce.

In a relatively quiet day for economic calendar events, the financial press deferred to the World Economic Forum at Davos, Switzerland for their news. Where the IMF began proceedings by suggesting that USA growth (and as a result global growth), will increase due to the Trump administration’s tax cuts. The IMF failed to explain how these tax reductions will directly stimulate growth, as opposed to simply increase director and shareholder rewards. Rising stock markets are never an indication of economic health, or central bank/government competence, neither is there any proof that rising markets reduce inequality, apparently a key discussion point and issue, for those assembled at Davos. The forum now awaits its star attraction to arrive and address the assembled, gilded, throng later this week; Mr. Donald Trump.

Sterling climbed by over half a percent versus both the euro and dollar on Monday, nearing $1.40 and reaching its highest level since the June 2016 referendum vote for Brexit, rising due to optimism that Britain will reach a favourable divorce deal with the European Union, a peculiar belief and development, given France’s President Macron’s comments on U.K. television on Sunday. GPB/USD is now down circa 8% since the referendum decision, with EUR/GBP up circa 14%, however, certain analysts are questioning the fundamentals underpinning the GBP/USD rise of circa 3.5% in 2018. Data published on Friday revealed that institutional level speculators have increased their net long positions in sterling to the highest level witnessed in over 3.5 years. The U.K. FTSE fell by -0.20% on the day.

The euro gained versus its main peers on Monday, with the exception of a fall versus sterling, due to two main factors, firstly; a final resolution to the German political situation, with the CDU and SDP parties finally agreeing a coalition, that only needs to be ratified by the grass roots SDP membership. Secondly; the upcoming ECB rate and monetary policy setting meeting, scheduled for Thursday, with certain financial commentators and analysts predicting that Mário Draghi and his colleagues will deliver a potential date for interest rate rises and advise on the tapering of the APP scheme. European markets rose on Monday; DAX closing up 0.22% and France’s CAC index up 0.28%.

Yen fell versus the majority of its peers due to the anticipation that the BOJ will not raise rates during their early Tuesday morning monetary policy meeting. The likelihood of any policy change from the current -0.1% interest rate became less likely, as Tokyo condo construction sales revealed a -7.5% fall YoY up to December, with convenience store sales falling by -0.3% YoY.

USD/JPY traded in a narrow range throughout the day, rising up through R1, reaching a daily high of 111.2, before surrendering a proportion of the daily gains, to close out up circa 0.2% at 110.8. The major currency pair is still some distance below the 200 DMA, sited at 111.78. USD/CHF also traded in an extremely tight range during the day, closing out up circa 0.1% on the day at 0.960, just above the daily PP. USD/CAD followed a similar pattern to other USD pairs, trading in a very tight range of circa 0.2% and closing out down 0.1%, just below the daily PP.

Sterling rose significantly versus the majority of its peers during Monday’s sessions; GBP/USD rising by circa 0.6%, closing out close to R2, at 1.398 on the day. GBP/CHF rose by over 1% on the day rising through R3, to eventually close out at approx. 1.344, tight to the third level of resistance. GBP/JPY rose to R2, to end the day at 155.1.

XAU/USD traded in a tight range on Monday with a neutral bias, ending the day up circa 0.1% at 1,333, just above the daily PP. The precious metal’s price oscillated around the daily PP throughout the day. The 200 DMA is sited at 1275, gold has been above this critical moving average level for January 2018.

« Will USA equity markets ignore the Federal government shutdown and continue to rise to new record highs? The Swiss National Bank (SNB) as one of the most profitable FX trading firms on the planet »