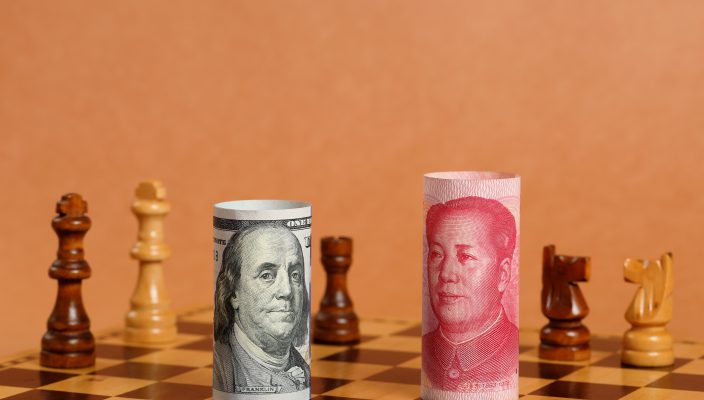 European and USA market sentiment reversed during Thursday afternoon’s New York trading session, following on from Chinese equity markets selling off sharply, during Thursday morning’s Asian trading session. The slump over the past twenty four hours, in global equity markets, wasn’t necessarily related to any social media narrative published by the Trump administration, or defensive rhetoric from China. Instead, collective market wisdom has finally developed; the realisation that China and the USA will both lose in a protracted trade war, has begun to crystallise.

Market participants have also woken up to the fact that the goods that were in transit, when Trump applied his elevated 25% import tariffs two-three weeks back, will now be docking at USA ports. Quite simply; his fellow citizens and China’s customers, will pay up to 25% more for the goods. Meanwhile, USA exports into China, such as soya beans and tobacco, are slumping in demand as Chinese customers look elsewhere for product, due to the tariffs making the product unattractive, in terms of cost. Countries closer to home, such as Vietnam, may begin to provide much of the arable goods China requires. Trump has announced a total of $28b in subsidies for USA farmers since 2018 to cope with the increased prices and lack of demand, highlighting the self defeating nature of the tariff programme.

In terms of assets generating safe haven appeal, XAU/USD rose by 0.92% on the day, trading at 1,286, up 11.84 dollars per ounce. The U.S. dollar fell sharply versus its peers during the New York session, as investors took refuge in the traditional safe haven currencies of yen and the Swiss franc. At 19:45pm USD/JPY traded down -0.75%, as the bearish price action saw the major pair crash through the third level of support, S3, breaching the 110.00 handle to trade at 109.5, the lowest level printed during the past week’s sessions. USD/CHF traded down -0.69%, breaching S3, printing a low not witnessed since April 16th. The dollar index, DXY, illustrated dollar weakness across the board, trading down -0.20%, slipping below the 98.00 handle, to trade at 97.85. Further dollar weakness was revealed by EUR/USD trading up 0.28% and GBP/USD trading flat.

With the overarching geo political and macro economic issues dominating market sentiment, the fact that the USA economy posted disappointing economic calendar data on Thursday, was largely ignored by analysts and FX traders. However, irrespective of the trade/tariff wars, the dismal figures should be of concern, in relation to overall USA economic performance. New home sales have collapsed by -6.9% in the single month of April, whilst Markit PMIs registered significant falls; both manufacturing at 50.9 and services at 50.6 for April, missed the Reuters forecasts and fell by some distance, remaining just above the 50 level, separating contraction from expansion. Continuous weekly jobless claims also rose, suggesting that the USA economy is close to peak and full employment.

Sterling experienced mixed fortunes during the day, predictably falling versus the safe haven currencies of CHF and JPY, trading flat versus USD (despite the dollar sell off) and down versus both Australasian dollars; AUD and NZD. The chaos, confusion and incompetence being displayed by the current U.K. government, as it mismanages: the Brexit debacle, it’s infighting and a potential leadership challenge, is causing investors to flee both the U.K. pound and the U.K. generally, in terms of actual business investment. The U.K. FTSE closed down -1.41%, at 7,235, the main U.K. index is up 7.47% year to date and down -3.88% monthly. The DAX and CAC closed down -1.78% and -1.84% respectively.

Friday May 24th is a relatively quiet day for economic calendar events and data releases, but during trading periods when geo political events dominate market sentiment, the economic calendar tends to be relegated, in terms of importance. At 9:30am U.K. time, the latest series of retail sales data is published for the U.K. Sales have maintained surprisingly high levels, despite the considerable amount of store closures witnessed in 2018-2019 and consumers having record low levels of savings. But with inflation revealing a sharp rise of 0.7% in April, retail sales may begin to fade. Reuters forecast a fall of -0.5% in April month on month, whilst the U.K. trade body the CBI suggests a fall of reported sales, from a level of 13 in April, to 6 in May. At 13:30pm the latest durable sales data for the USA will be revealed, the expectation is for a reading of -2.0% for April, a considerable fall from 2.6% recorded in March. Once again, revealing the precipitous position  the USA economy is currently in.