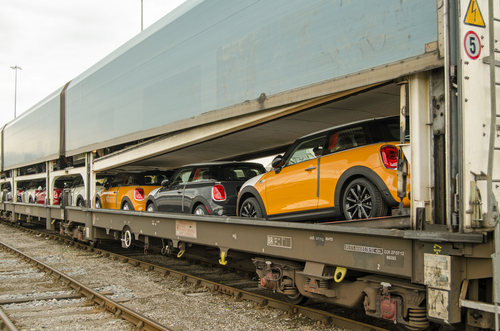 After Honda recently announced they were exiting the U.K. by 2021, sector analysts and U.K. government mandarins, were hoping that the slump the car manufacturing industry is obviously mired in, wouldn’t show any signs of worsening, when the latest data was published by the trade body the SMMT on Wednesday. Unfortunately, the industry reported that car production fell by -18.2% in January, whilst car exports fell by -21.4%. A desperate set of figures, for an industry trying to justify its existence, as manufacturers crunch the numbers to decide if remaining in the U.K. will be economically viable, in a post Brexit world. Honda voted to exit the U.K. with the loss of 7,000 jobs minimum, after JLR had already committed to shed 4,500 jobs. The future looks very bleak, for the U.K.’s major manufacturing base.

The U.K. FTSE traded down -0.75% at 9:00am U.K. time, maintaining position above the 7,000 handle, at 7,054. Sterling traded close to flat versus the U.S. dollar, arresting the recent rises, which have been based on a no deal Brexit crash out looking less likely. At 9:15am U.K. time, GBP/USD traded down 0.06% at 1.330, close to the daily pivot point and in a narrow range. EUR/GBP traded up 0.19%, at 0.856. The only economic calendar data of note concerning the U.K. involved the latest house price figures from the Nationwide; despite falling by -0.1% in February, prices failed to go negative year on year, registering a 0.4% rise.

Other Eurozone market indices also traded down; DAX down by -0.28% and CAC by -0.19%. EUR/USD traded up 0.20% at 1.139, owing more to dollar weakness, as opposed to euro strength. The overall trading mood in Europe was impacted by the latest Swiss GDP data, as both the latest quarterly and the yearly data, missed the forecasts. GDP came in at 0.20% for Q4 2018, whilst annual GDP came in at 1.40%. The value of the Swiss franc came under scrutiny after the data was published; USD/CHF slumped by -0.65%, losing the close to parity position the major pair has held during most of February. EUR/CHF fell by -0.43%, falling to the second level of support, S2.

The dismal manufacturing and export figures for the U.K. have been severely impacted by China’s domestic performance over recent months, as car and car parts exporting to China from the U.K. have slumped by circa 70%. The Official NBS Manufacturing PMI in China fell to 49.2 in February from 49.5 in January, missing the forecast of 49.5, representing the steepest contraction in the manufacturing sector, since February 2016.

Output in China shrank for the first time since January 2009, export sales fell at a faster rate, whilst employment dropped further. The sub index, which measures exports was extremely weak, slumping to just 45.2; the lowest level witnessed since February 2009, when the global economy was deep in recession. Chinese exports have now fallen for nine months in series. The leading Chinese index, the CSI, closed down 0.25%, whilst USD/CNY traded close to flat, at 6.685.

Asian market optimism was slightly dented by news emerging from Hanoi, Vietnam, as the Trump-Kim detente abruptly ended, with no resolution and no ceremonial celebration, involving the typical signing of a joint declaration. Trump immediately held a press conference stating that North Korea wanted all sanctions removed, which the Trump administration could not agree to. Quite how and why this situation occurred, is a question both parties will now have to examine.

The conclusion could be that the summit was staged, it was a complete waste of time, raising suspicions that Trump knew of the outcome in advance, but wanted to deflect focus away from Michael Cohen’s Washington testimony. USA equity indices were indicating a fall when New York opens; at 10:00am the NASDAQ traded down -0.43% and the SPX future traded down -0.25%. The dollar index, DXY, traded down 0.16% right on the 96.00 handle. USD/JPY traded down -0.17% at 110.8.

Analyst and FX traders’ focus will now turn to the economic calendar and specific releases relating to the USA economy. The key release this Thursday afternoon concerns the latest GDP growth figure, Reuters have downgraded their estimate over the last twenty four hours to 2.2% annual growth up to Q4 2018, from the 3.5% in Q3. Such a reversal, added to the recent adjustment, might take analysts and FX traders off guard. Therefore, traders would be advised to diarise this event, with the releases scheduled for 13:30pm U.K. time.