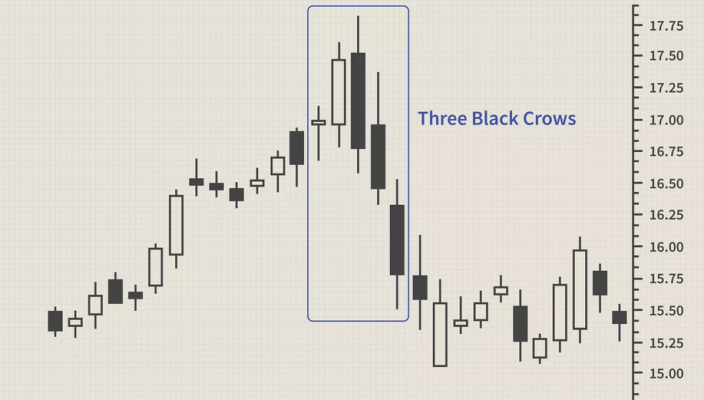 How to find the three black crows pattern?

Each candle in a three-black crows pattern closes lower than the preceding one, indicating an aggressive attempt by the bears to push the price down and reverse earlier bullish gains.

Although the pattern may start with a gap down, the second and third candles open within the body of the candles that came before them. Furthermore, each candle has a very small lower shadow, ideally none at all indicating that bears can retain price at the session’s close.

The body of all three candles should be around the same size. This demonstrates the bearish push since it pushes price across a large range without giving the bulls any ground.

Look for long-bodied bearish candlesticks that close at or around the period’s low price when you apply the three black crows strategy.

To put it another way, the candlesticks should have long, genuine bodies and brief, or none at all, shadows. If the shadows are expanding out, it might only be a tiny change in momentum, and you won’t be able to use the approach.

At peaks, the price always forms the three black crows pattern. This is because it serves as a warning to traders that a decline is about to begin.

Alternatively, the market may be trending sideways. This candlestick pattern arises out of nowhere, signaling that the price is about to fall and establish a downtrend.

As a result, the bearish three-black crow pattern is more likely to appear near the end of a bullish trend.

It can, however, come after a period of market consolidation, much like its bullish counterpart, the three white soldiers. While it is still seen as a warning of upcoming bearish action, it is not as powerful as a pattern that appears after a big rise.

However, this pattern has the potential to be too forceful. For example, large candles might suggest that the bears have overstretched themselves and pushed the price into oversold territory.

So, in this scenario, bears become cautious that the reversal does not turn into a pullback as the bulls take advantage of their reduced momentum.

Many traders typically look at other chart patterns or technical indicators to confirm a breakdown rather than exclusively using the three black crows pattern. As a visual pattern, it may be interpreted in various ways, such as what constitutes an appropriate short shadow.

Three black crows are a pattern strategy that lets you find the downtrend and take sell positions accordingly. To remove the market noise, you should combine the strategy with indicators such as the RSI.