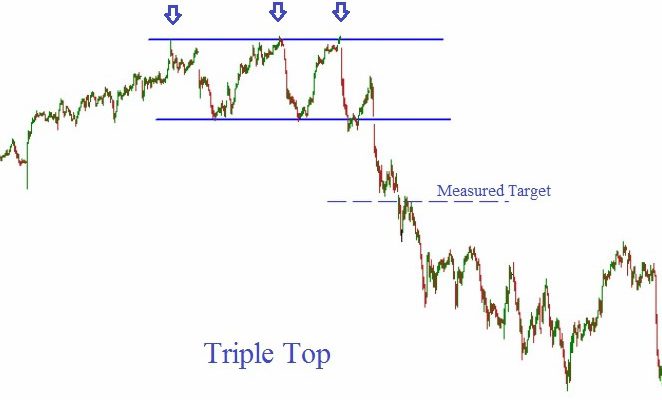 Triple Top is a price action pattern that predicts the reversal of the bullish trend. The pattern is represented as three consecutive highs of equal height. It is a special type of Head and Shoulders pattern where the head is placed at levels with the shoulders. Both of them signal a change from an uptrend to a downtrend.

What is the Triple Top Pattern?

We call the pattern reliable for a good reason. As the name suggests, the pattern tells that a price failed to break the resistance level three times consecutively. The pattern is considered void if the previous is breached by more than 5 pips because it shows the potential of  rise beyond the previous tops.

Every fresh attempt reinforces that the bulls are losing their grip and increases the chances of a reversal.

How to Identify the Triple Top Pattern?

It is difficult to identify the Triple Top pattern; however, taking a few important factors such as trading volume, price levels etc., into account, it can be made possible.

The triple top pattern is hard to recognize since it requires an in-depth analysis. Differentiating this pattern from the rest can be difficult because the pattern looks exactly like Double Top until the third peak appears.

Moreover, three consecutive highs at the same level are a feature of Ascending Triangle and Ascending Rectangle. Triple Top is verified when an asset falls below the support level, followed by a considerable rise in the trading volume. It means that you should not trade the pattern with a pending sell order near the tops. Rather, it is advised to wait until the pattern is complete and is confirmed by the breakout of neckline support.

« How to Use Ross Hook Wave Indicator Strategy? How to Use the Jaroo Price Action Strategy »