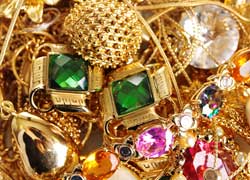 The Hindu Festival Of Akshya Tritya And Gold

The main reason for this is the rise in gold prices which has grown by 22% year-on-year in past five years and people expect prices to rise further.

But according to the WCG data, the sale of gold in volume terms has dipped by 7% in year 2011 against 2010. Diamond jewellery has also grown at a faster rate. “Due to high gold prices many people are preferring diamonds and the growth of diamond jewellery is about 40% compared to last year in the week,” added Agarwal.

There has been a steady increase in the demand for gold despite the rise in prices and bullion and jewellery witness equal amount of demand. According to the industry experts it was expected that buyers would stay away this year from buying gold. This had resulted in many jewellery retailers were offering free-bees to customers.

Jewellers in India have just recently ended a two week strike over the governments doubling of import and customs duties on gold, the second increase this year.

Despite a challenging year, India remained the largest country for gold demand in 2011,  the strong intrinsic and emotional affinity towards gold in India will continue to fuel demand over the coming year.  India lost its top spot in the fourth quarter of 2011 to China, and in 2012 again as Chinese bought 190.6 tonnes of gold against India’s 173 tonnes. World Gold Council predicts that China may as well overtake India in 2012 gold purchased annually.

Indians traditionally purchase gold in the form of jewellery more than as a pure metal for investment. However, in 2011, gold investments recorded a marginal rise of 5% from 349 tonnes in 2010 to 366 tonnes.

Despite this, in absolute terms the purchase of jewellery still occupies bigger mind space in Indian consumers despite the change in lifestyles that make jewellery less hot in urban circles.

Gold has historically been seen as a safe haven. This Akshya Tritya, the big question is whether the lingering global uncertainties that add to the metal’s lustre will persist or not.