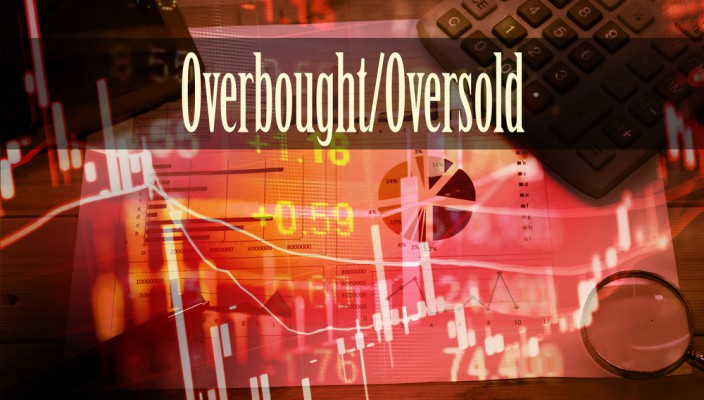 The definition of the words and the concept of oversold and overbought, are straightforward to understand. A security, such as a Forex currency pair, is generally considered to have fallen into this category if certain indicators, for example; the RSI (relative strength index), has entered an oversold, or overbought area. This is generally indicated by a line drawn on a time frame, if price crosses this line to the upside (or downside), then the security is generally declared as being “overbought”, or “oversold”.

Developed by J. Welles Wilder, the Relative Strength Index (RSI) is a momentum oscillator which measures the speed and change of price movements. The RSI oscillates between readings of zero and 100. Traditionally, and according to Wilder’s original theory, the RSI is considered overbought when above 70 and it’s regarded as oversold when it’s below the 30 line of demarcation.

What is relevant is that the mathematics should reveal a potential and upcoming change in market sentiment, as according to the technical indicator, based on recent history, the security is now entering an area represented on the chart, whereby the security is likely to give up some of its recent gains.

Overbought and oversold conditions are concerned with the velocity and magnitude of the direction of price movements. Investors who look to trade from oversold or overbought conditions are of the opinion that when price moves up very rapidly, then at some point it will be considered overbought. Similarly, when price falls very rapidly, at some point it’s then considered to be oversold. In eeach instance, the belief is that a reaction, or a reversal in sentiment is imminent.

In part, the theory of oversold or overbought, also relates to sentiment and psychology; the belief is that the rush into a security, to cause it to push through into what’s considered to be oversold and overbought conditions, will also lead to investors either taking profit off their positions, closing positions, or reversing their positions from perhaps short to long, as they believe a turn in sentiment and the price of a security, is now imminent.

The most favored candlestick for observing overbought conditions is the shooting star and the most commonly used candlestick for observing oversold conditions is the hammer. Although any candlestick that indicates a reversal pattern can be used, such as; dojis and spinning stops. Also it must be noted that opinions will naturally vary on which candlestick provides the most accurate representation. However, it’s important not to use a single candlestick in isolation and to look for as much evidence as possible from other sources, in relation to a potential reversal in overall sentiment, to illustrate an oversold, or overbought condition.

The reason many traders will look to identify oversold and or overbought conditions, is that it provides an ideal opportunity to enter or exit the market in (potentially) a highly precise manner. Novice traders in particular need to avoid entering the market without reason, in a random, haphazard manner, it’s important to always have a reason to take a decision based on what we see, not what we think.