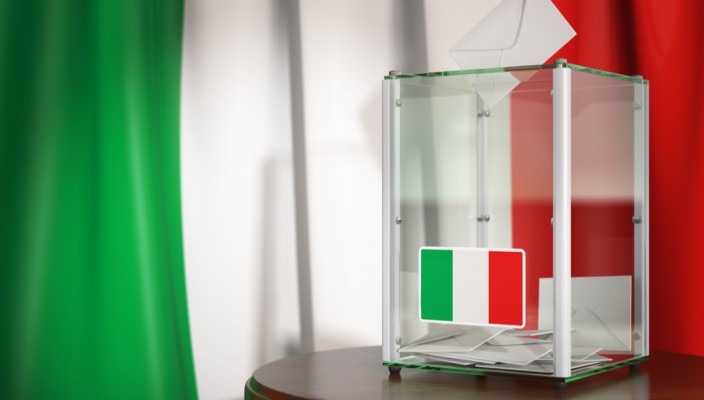 Official results of Italian votes are not expected to be soon, but projections point to a hung parliament

Mar 5 • Morning Roll Call • 2046 Views • Comments Off on Official results of Italian votes are not expected to be soon, but projections point to a hung parliament

The Euro witnessed a mixed start to the week, initially having received a boost following the weekend’s German SPD’s vote in favor of the coalition deal. However, the upside was short-lived as sentiment soured on the Italian election’s projected outcome of a hung parliament, with both the anti-establishment 5-Star Movement and the far-right League party outperforming in the first exit polls.
Meanwhile, the US dollar found some love against the Antipodeans, as downbeat Chinese Caixin services PMI weighed down on both the Aussie and Kiwi. The USD/JPY pair, however, traded with sizeable losses amid risk-off market profile, reflected by negative Asian equities and Treasury yields.
BoJ deputy governor nominee Wakatabe continues to speak at the confirmation hearing. There are no limits to monetary policy, deflationary mindset is still entrenched among the public, BOJ should create conditions for companies to raise pay, while he refuses to comment on 2019 sales tax hike. – FXStreet

The implied volatility premium for EUR puts (bearish EUR bets) continues to drop, suggesting investors do not expect a hung parliament in Italy to have a big impact on the EUR/USD. We’re into a tough spot here with the major pair. The Euro has been trading within a well-defined uptrend over the past several months, since breaking out in 2017. However, the market is looking stretched and could also be at risk for a pullback, especially as it trades into massive falling trend-line resistance. – FXStreet

Sterling ranks last on the list of anti-risk currencies and could take a beating if trade wars escalate given the UK’s big current account deficit, domestic political issues and the Brexit uncertainty. The outlook for this major pair is highly constructive, with the market going through a major structural shift in 2017 that has signalled a longer term bottom. But even uptrends go through corrections, and after rocketing in 2018, the market should be more inclined to look for a higher low before materially extending gains. – FXStreet

USD/JPY’s move higher to 105.68 was short-lived as the uncertainty over Trump’s tariffs continues to weigh on risk sentiment. As of writing, the pair is trading largely unchanged on the day at 105.50. Now that the market has broken down below critical multi-month range support, there is risk for a lower top and additional setbacks in the days ahead that could take the price back towards a key Fibonacci retracement off the 2016 low to high move. Back above 110.50 would be required to take the pressure off the downside. – FXStreet

Gold peaked today at $1325/oz, reaching the highest level since Tuesday. After the beginning of the US session moved of highs and pulled back to $1317. Near the end of the week, it was hovering around $1320, headed toward a modest weekly loss but far from the lows. – FXStreet

« UK manufacturing PMI held a pleasant surprise yesterday and US manufacturing activity remains strong. All eyes will be on Prime Minister May speech today UK services PMI higher than anticipated. Euro seems to stabilize as the markets slowly digest the Italian elections, while the developments on US trade policy will be the primary focus this week »