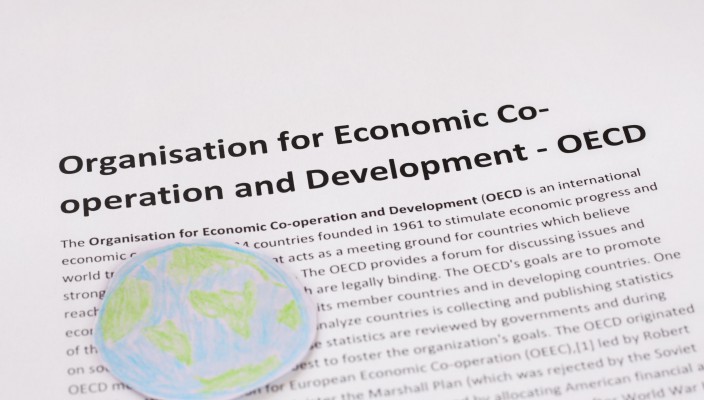 On Thursday, the Organization for Economic Co-operation and Development (OECD) had announced a revised global economic growth outlook, stating that the world economy is on the course for growth of 3.7% this year and in 2019. However, in May this year the expected outlook was 3.8% in 2018 and 3.9% in the following year. The reason for the lower expectation is caused by the tensions between the US and its major trade partners that have influenced the confidence and investments. According to the OECD chief economist, Laurence Boone, the exports have evidently started to decline, which was evident in the fast few months and there are great expectations that further decline in trade growth will endure. However, the economic outlook for the US is not so gloomy due to the tax cuts and government spending, thus the outlook for America has remained unchanged for 2018, staying at 2.9% but for 2019 it was revised from 2.8% to 2.7%.

The increased interest rates and stronger US dollar may cause problems to Brazil, Turkey and Argentina, the emerging market economies, thus OECD had reduced the forecasts for the above mentioned countries. In addition, the new tariffs imposed by the US to China are expected to hit the US consumers directly, as the consumer goods are going to have new 10% duty, which means an increase in prices. The previous tariffs on $50 billion worth of Chinese goods did not have a direct impact on the consumers, as they were focused mostly on industrial good and intermediate parts.

From the macro-economic news releases on Thursday, the US jobless claims have fell more than expected with a seasonally adjusted 201k in August, as opposed to the expected 210k. The unemployment levels are still the lowest since 1969, giving a signal of a strong labor market. Considering the current numbers, the labor market is considered as being near or at full employment, while the all-time high was reached in July this year with 6.9 million job openings. Nevertheless, economist are still warning that we could see layoffs in the case of trade tensions escalation.

In addition, the Philly Fed manufacturing index measuring the level of general business conditions has rose this month, with a reading of 22.9, as opposed to expected 17.5. The indicators for new orders, general activity, employment and shipments all had positive readings in the previous month and the respondents of the survey moderated price pressures in September, with the expectations for the next 6 months remaining optimistic.