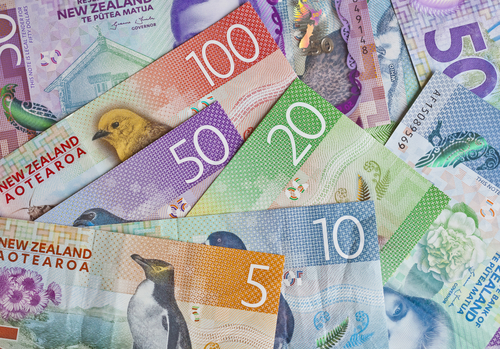 The New Zealand dollar crashed versus its peers during the Sydney-Asian session as the central bank, the RBNZ, issued a monetary policy containing dovish forward guidance, suggesting that interest rate cuts were likely in the short to medium term, as opposed to its previous commitment to raise the rate. RBNZ Governor Adrian Orr declared:

“Given the weaker global economic outlook and reduced momentum in domestic spending, the more likely direction of our next OCR move is down. The risk of a more pronounced global downturn has increased and low business sentiment continues to weigh on domestic spending.”

Central bank policy occupied the financial news landscape, during the morning London-European trading session, as Mario Draghi, the President of the ECB, delivered a speech in Frankfurt. FX analysts and traders appeared to react positively to the content. Mr. Draghi stated:

“Our monetary policy will remain accommodative and will respond to any changes in the inflation outlook. The effects of exchange rate appreciation have now reversed. Demand should recover, so long as the downside risks to our outlook do not materialise. And with stronger demand, firms should be able to rebuild margins. The ECB will adopt all the monetary policy actions that are necessary and proportionate to achieve its objective. We are not short of instruments to deliver on our mandate.“

Mr. Draghi also offered up support to eurozone banks, stating the ECB is monitoring the impact of negative interest rates on their profits and could take measures to help. The euro rose during and shortly after his speech, albeit by relatively modest amounts. At 9:10am EUR/USD traded up 0.05% at 1.127, recovering from earlier losses, when the first level of support S1 was threatened. EUR/GBP traded close to the daily pivot point, in an extremely tight range, up 0.06% at 0.853. Naturally EUR/NZD registered significant gains, based on NZD weakness, as opposed to euro strength, EUR/NZD breached R3 during the Sydney-Asian session.

The U.K. Brexit situation could take a fascinating turn late evening on Wednesday, during a sitting in U.K. Parliament, as the country’s MPs meet to discuss what’s termed “indicative votes”. This is an attempt to discover a consensus for a Brexit solution. MPs will place their preferences, regarding various options, on a simple ballot paper. From this process, actual votes may take place on Monday, on any agreements/amendments MPs actually reach. Whilst these votes aren’t technically legal and binding, the current prime minister might find any final consensus impossible to ignore.

The ultimate result could be the May withdrawal agreement being put to the U.K. people in a straight forward new referendum; accept this WA, or remain? GBP/USD rose marginally in early trade; at 9:40am U.K. time the major pair traded at 1.320, close to flat on the day, oscillating close to the daily pivot point, whilst the FTSE 100 crept back above the 7,200 handle at 7,205, up 0.13%.

Economic calendar events relating to the USA economy this afternoon include the trade balance for January and the current account balance for Q4; both are forecast by Reuters to remain in significant deficits, with the trade balance predicted to reveal a modest improvement to -$57.5b for January. Whilst the Q4 current account balance is forecast to deteriorate to -$130b, from Q3 $124.8b. Both data releases are listed as low to medium impact, but have the power to move the markets in USA equity indices or USD, if the results miss, or beat the forecasts.

Energy reserves data for the USA is provided by various sources this afternoon, the readings for oil could impact on the value of WTI (which has recently breached the 60.00 handle), if stockpiles and inventories change significantly. Analysts and FX traders might now begin to turn their focus and concentration towards the latest GDP figures for the USA economy, due to be broadcast at 12:30pm U.K. time, on Thursday March 28th. The Reuters forecast is for a fall to have been recorded for Q4 2018 annualised, to 2.40% from 2.60%. A result which if matched, could move the market for USD.

« U.S. dollar rises versus several peers, euro falls, whilst sterling makes modest gains as no deal Brexit recedes The latest GDP growth figure for the USA economy, could indicate a slowing, if the forecast is met »