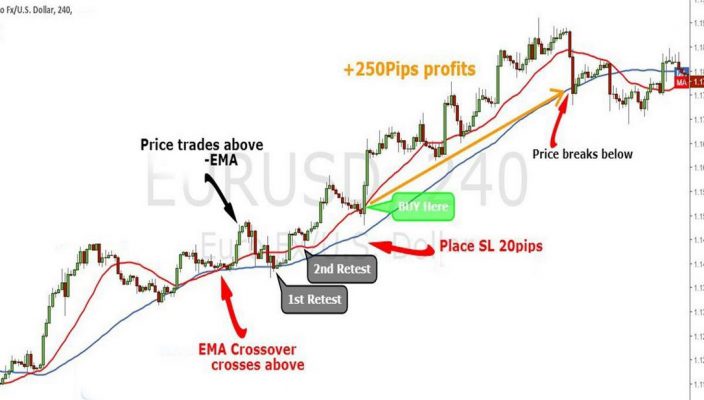 A moving average is a form of daily technical analysis that uses an updated average price to filter out price data. The average is calculated over a certain period, such as a year, 20 days, or one week.

What do Moving Averages tell us?

The use of a moving average can help to filter out market noise. A trader can predict price movement by looking at the direction of the moving average.

Moving averages can operate as support and resistance levels, which is one of its key advantages. For example, a 10-day, 100-day, or 200-day moving average may operate as a support level during an uptrend, indicating that the price will likely bounce higher.

On the other hand, a moving average can act as resistance and signal price decline during a downtrend.

Types of Moving Averages for the strategy

There are two main forms of moving averages:

The EMA is not as straightforward to calculate as the SMA. This is because the EMA gives recent prices more weight. Due to the greater weight on recent prices, a 20-day EMA will respond swiftly to price movements compared to a 20-day SMA.

One of the most used moving average strategies is crossovers. Traders can use crossovers in several ways.

Another crossover method is to use two moving averages, one shorter and one longer, at the same time. The trader’s choice determines the length of these moving averages.

An uptrend is indicated when a shorter moving average crosses above the longer MA. The golden cross is another name for this. When the shorter MA crosses below, the longer one, it suggests a downtrend. It is also called the death cross.

When going short, the price must fall below the moving average. The shorter one must cross below the longer one.

One of the most effective methods for determining the general market trend is to use crossovers. To enhance their trading strategies, traders can mix other technical analysis forms with moving average crossovers.