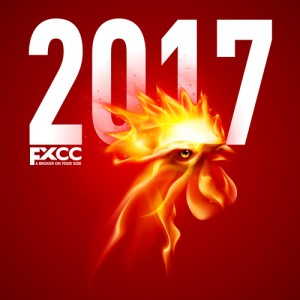 In the Chinese year of the Fire Rooster, don’t be too cocky.

London is still the major FX trading venue globally, therefore, with the UK’s holiday season extending to what’s termed a “bank holiday” on Monday, trading volume in FX and metals markets is likely to be significantly reduced throughout Monday’s normally two distinct trading sessions. Thereafter, the fundamental economic calendar events likely to move our markets, will come thick and fast from Tuesday onwards.

This coming week we have some of the major data releases published in our calendar. For example; PMIs, the non farm employment figures and the release of the FOMC’s minutes, concerning the December rise of the USA base rate by 0.25%. Notwithstanding these events there’s other issues, percolating in the background, which still have the capacity to shock as a consequence of sudden, or unexpected outlier information and any ongoing decisions made.

The Italian banking crisis still haunts the markets; whilst the Italian government’s intervention appears to have plugged one of the leaking gaps at Monte Dei Paschi, it must be noted that estimates suggest the Italian banking system still has circa €300 billion of NPLs (non performing loans) in their portfolio, €200 billion of which many analysts believe can never be paid back. Theoretically this issue as bigger than Lehman and its MBS (mortgage backed securities) scandal and crisis, yet investors and market commentators appear to be adopting a conciliatory attitude, as a dangerous form of complacency takes hold.

The UK’s Brexit issue is likely to resurface in January, as many European ministers will begin to demand some consistency and a timetable for exit. The relatively benign business environment, the stronger euro and the bullish end of 2016 for European equity markets, have bought the UK’s government time. However, the patience of many European finance ministers was wearing thin in December and the UK’s prime minister painted herself into a corner in late 2016, by insisting a timetable for exit would begin to take place in late January. The focus on sterling will then once again return.

In less than three weeks there’ll be the inauguration of the 45th president of the USA. The Trump markets bounce dovetailed perfectly with the (now reliable as clockwork) Santa rally, but the honeymoon period may be short lived. There’s still certain data emanating from the USA economy suggesting that the enthusiasm for Trump’s potential policies is misguided and that markets and the dollar’s worth has peaked. Combined with the end of the 35 year bull run in USA bonds, 2017 could prove to be as interesting and challenging a trading year as recent years. And by the time Chinese New Year is upon us on January 28th, we may begin to evaluate what direction these three leading issues are headed in.

The monthly non-farm payroll numbers for the USA are released on Friday. After the Fed raised the base rate in December, suggesting several rate rises for 2017, the figure may either support, or hinder the Fed’s commitment to rises rates further, based on their assessment of a strong economy underpinned by robust employment numbers. Analysts polled anticipate a figure of 178K jobs added in December, with the unemployment rate revealed later in the afternoon, to have possibly ticked up by 0.1% to 4.7%. The NFP jobs data is due out at 13:30 on Friday, one hour before the USA markets open.

Wednesday sees the release of the minutes from the recent Federal Open Market Committee (FOMC) December meeting, when they raised the rate by 25 basis points. Minutes from that meeting may reveal how united members are and when the next rate hike can be expected. There is some disagreement in analyst circles as to whether it’ll be two of three rate rises in 2017.