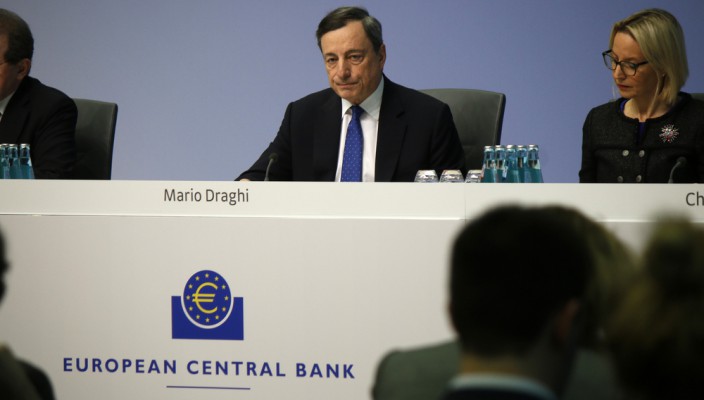 As a central bank, trying to balance the value of the currency for which your monetary policy is responsible for, is an incredibly difficult task. There’s a Goldilocks temperature; not too hot, not too cold, that’s just right for the economy. The value of the domestic currency has to:
– encourage exports,
– encourage imports,
-keep inflation at a rate that won’t harm either,
-assist businesses and,
– ensure that employers have the capacity to raise wages in line with inflation, that doesn’t cause a ripple effect of inflationary pressure building up in the economy.

The Eurozone single currency bloc has recovered extremely well from its recessionary status. The eurozone finally (and officially) emerged from recession in August 2013, after a record 18 months of economic contraction. The trading bloc’s GDP grew by 0.3% in the second quarter of 2013. Growth is now at 2.7% YoY, the highest growth rate recorded since 2007.
The latest figures published on Wednesday February 14th also revealed 0.6% MoM growth for the final month of 2017. Industrial production growth for the area is currently 5.2% up to December, rising from 3.7% in November. The good news for the E.Z. is that growth is not confined to Germany as the nucleus of growth for the trading area. Italy and France, who were previously lagging when measured as stand-alone economies, are now also generating impressive hard data figures.

Mario Draghi and the ECB are now faced with a dilemma, they’ve tried to talk the euro down over recent months, in order to prevent its value rising much further versus the U.S. dollar and the U.K. pound. A weaker euro (or a value for the euro that hits that Goldilocks value) stimulates manufacturing and exports- other countries get your finished goods cheaper. However, the weaker euro also increases the cost of imports. The E.Z. operates surpluses in terms of trade balances and balance of payments, whereas the USA and U.K. operate deficits, the E.Z. is a net exporter and the ECB, and the various E.Z. members, don’t want that scenario to alter.

The ECB anticipated that the USA FOMC/Fed ratio rises during 2017 would directly lower the value of the euro versus the dollar and perhaps indirectly lower its value versus other currencies in a correlated manner. However, the three rate rises in 2017, from 0.75% to 1.5%, failed to arrest the dollar’s fall versus its peers. The ECB are painted into a corner, they’ve committed to tapering and then eventually withdrawing the monetary stimulus, called the APP (asset purchase scheme), and the tapering will begin to accelerate over the next few months. Moreover, the ECB has begun to suggest that the key interest rate may rise from the floor of 0.00%. However, tapering too aggressively, or raising the rate by 0.25%, could result in the value of the euro rising considerably versus its peers.

After recording considerable rises versus the U.S. dollar in 2017, the euro has risen by approx. 3% versus the U.S. dollar in 2018. It has also risen versus a basket of its peers and as a consequence this will make manufactured goods more expensive.
Drawing up a monthly chart for the euro versus the majority of its peers reveals a similar pattern. Whether versus the Aussie, Kiwi, Swissie, Loonie, or Yen, the rise throughout 2017 was considerable, however, the E.Z. still delivered the impressive hard data growth figures previously mentioned. Therefore an argument could be put forward that the ECB are in a good place with regards to the value of the euro, as they can’t yet see any material damage to GDP growth and with inflation recently falling to 1.3% they could theoretically suspend any tapering to the APP.

It’s highly likely that the value of the euro versus its peers will become a hot topic of conversation during 2018. Moreover, the ECB will try to talk the value of the euro down if they feel it’s necessary, before implementing any monetary policy adjustments. This topic, resulting in adjustment to the value of the euro, should provide ample opportunities for EUR/USD traders through the year. Whether day traders or swing traders, this major and most traded currency pair, is likely to experience intense speculation over the coming months and throughout the remainder of the year.

« UK services PMI higher than anticipated. Euro seems to stabilize as the markets slowly digest the Italian elections, while the developments on US trade policy will be the primary focus this week The recent stock market correction should serve as a wakeup call for complacent Forex Traders »