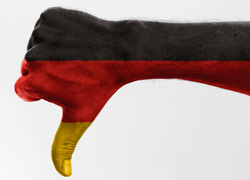 Whilst it’s not Fitch, Moody’s or Standard & Poor’s Sean Egan of Egan-Jones is a highly respected analyst and let’s not forget this was the agency that stole a march on S&P by downgrading the USA credit rating whilst S&P executives were busy naval gazing.

The company also sounded the alarm bell on Lehman Brothers, AIG, MBIA, and MFGlobal before other rating agencies. Their downgrade of Jefferies in particular forced the broker-dealer to publicly disclose its European exposure to get investors off their backs as the stock tanked.

Prone to controversial actions Egan-Jones has axed Germany’s sovereign rating from AA to AA- and kept it on negative credit watch. Although it’s the Eurozone’s strongest economy, German tax payers will be footing a significant portion of the bill for the different bailout mechanisms in place, from the EFSF to the ECB and even the IMF’s funding facilities.

A section of the report states;

Germany maintains its position as the European Union’s top economy. However, Germany has been shouldering the burdens of other EU countries via its exposure to the EFSF and indirectly via the ECB’s hefty exposure to the weaker banks and the weaker sovereign credits. The country’s debt to GDP of 83% as of 2010 (expect near 86% for 2011) and a deficit to GDP of 4.6% is weak (and getting weaker) for a top-tier country. On the positive side, unemployment was only 6.8% but will probably increase as many EU countries implement austerity measures. Other positives were the positive (EUR133B) balance of trade and the positive (EUR193B) current account as of the end of 2010. Inflation has been fairly moderate at 2%, but we expect an increase as a result of the decline in the euro relative to the dollar.

German chancellor Angela Merkel continues to create tension with EU member states by pushing for ratification of changes to the Lisbon Treaty. The government insists that private investors bear more of the costs of further European bailouts. Note, the cost of the bailouts is likely to be absorbed via increased support for the EFSF, the ESM, the ECB and a rise in the number of euros. The fallout from a likely Greek default needs to be monitored.

IMF wants €25 billion from the UK
The IMF is on the warpath and when the IMF looks in your pockets you don’t refuse. They require $1 trillion of fresh capital in order to avert a Eurozone credit crunch and the G7 countries will have to provide the most. That includes Britain whose ‘ruling’ politicians, fresh on a high in the UK mainstream media for giving ‘Jonny Foreigner’ a bloody nose in the form of a veto in Europe, will now have to explain to its public why they’re having to cough up €25 billion to rescue the Eurozone. If the UK has to gain parliamentary approval for a donation that the UK media will state “could build ten new hospitals, twenty new schools, employ 1,000,000 school leavers” then the coalition could face stern opposition from its own. Given they struggled to get a positive vote on the last IMF contribution a vote in the house of commons during Spring-time could prove to be pivotal.

Market Overview
U.S. equities advanced, the Standard & Poor’s 500 Index has had its best start to a year since 1987. The euro rose as the International Monetary Fund proposed boosting its lending resources by as much as $500 billion. The S&P 500 rose 1.1 percent to 1,308.04 at 4 p.m. New York time, closing above 1,300 for the first time since July. It has surged 4 percent this year. That USA investor optimism may come to a sudden halt, at least 48 companies in the S&P 500 are scheduled to report quarterly results this week. The entire S&P 500 will report a 4.6 percent increase in per-share earnings during the September-December period, analysts’ estimates compiled by Bloomberg suggest.

Only 47.1 percent of S&P 500 companies that posted quarterly results between Dec. 1 and yesterday exceeded the average projection, according to data compiled by Bloomberg. So called positive surprises have surpassed 50 percent at a comparable point in every other quarterly reporting period for the past four years. The previous low was 51.5 percent in the third quarter of 2008, during the global financial crisis.

The euro rallied versus 10 of 16 major counterparts as Greek Prime Minister Lucas Papademos resumed negotiations with bondholders. The dollar fell against the euro on reduced demand for a refuge as U.S. data showed industrial production increased 0.4 percent in December after contracting 0.3 percent the month before. The pound weakened versus the euro as Britain’s unemployment rate rose to a seventeen year high of 8.4 percent.

Crude oil futures declined 0.1 percent to $100.59 a barrel, after rising as much as 1.3 percent and then tumbling 0.9 percent. Natural gas declined 0.6 percent, extending its seven-day retreat to 19 percent.

The ECB’s Current Account gives a thorough inventory of the ways in which the European Monetary Union’s economy is operating in conjunction with other economies around the globe. Current account is one of the three components, along with Financial Account and Capital Account, that comprise an economy’s Balance of Payments.

The Current Account gives details of the Trade Balance (exports and imports for goods and services), income payments (such as interest, dividends and salaries) and unilateral transfers (aid, taxes, and one-way gifts). A Current Account surplus (that is, a positive number) shows that the flow of money from these different components into the EMU is greater than the flow of capital out of the region. A Current Account deficit (negative number) means the opposite: there is a net capital flow out of the economy.

« Playing The NFP Game Like A Winner I Am A Citizen, Not Of Athens Or Greece, But Of The World »