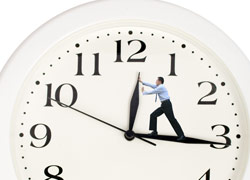 He Waits – That's What He Does

“You probably think the COT report is a Mothercare survey on which cots are best for new born babies” was a humorous but cutting put down I read on a forex trading forum a few years back. It was a line hurled at a fledgling trader who was attempting to swing and trend trade (by using indicators only) without even a cursory glance in the direction of the news, or the fundamental economic situation of an individual country or continent.

Back then I’d traded intraday for a year or so, it was this type of remark that propelled me into keeping constant vigilance on fundamental macro-economic issues. As someone who was schooled in economics it made perfect sense. As my trading preferences evolved I became convinced that my own trading should match the fundamental events that shape our forex trading world which in turn caused me to abandon intraday trading in favour of swing/trend/position trading.

At the time I read the ‘COT putdown’ my conscious mind, which was indirectly affecting my unconscious competence as a trader, had began to accept the notion that; “trading below the ‘dailies’ is trading noise”, a theory that I resolutely stick by to this day. However I keep in mind that I’ve also discovered, through trial error and much mental scarring, that trend trading is my forte, I accept that as a trading method it isn’t for everyone. Horses for courses etc. Range trading is simply an area I avoid.

The fact that markets are random is surely proved by the fact that circa 80% of the time they range. I use simple visualisation to explain when our selected pairs move out of range and into trend, “surf’s up”. Twinned with that I tend to use simple explanations, “something is happening right now in the market”. Sure enough if you plot the daily chart for the year on, for example, the EUR/USD or the AUS/USD you’ll easily pinpoint when the crucial decisions or key data was released that affected sentiment, be it positively or negatively.

Every trader should make themselves aware of the fundamentals that shift the market, traders should also ensure they know which data releases rank highest in terms of market impact on a daily basis, but traders have to go that bit deeper nowadays. The advent of ECN trading by brokers (such as FXCC) allowing traders to see the DOM (depth of market) is one massive development which shouldn’t be overlooked or underestimated, but there are also key fundamental publications that forex traders would be well advised to be aware of that will impact their trading results. At the top of the list the COT report ranks highest.

Our forex charts are a visual graphical representation of the overall investor sentiment at any given snapshot of time. Certain indictors give a tremendous indication of the turning points in the market, in particular for trend traders this could be when the trend stops, an area of consolation is occurring and when that consolidation finally breaks to hopefully signal the emergence of a new trend.

However, in theory and in practice we could take trading decisions off the DOM, (the ‘tape’), news events including fundamental macro-economic decision making and a report such as the COT report. Is there any better indication as to whether you’re trading with or versus the trend than this combination, particularly the COT report?

Trend traders possibly benefit most through the COT report. However, even intraday traders would benefit from knowing whether or not they’re trading with or versus the trend. If we take a series of four intraday trades, (perhaps taken off the one hour time frame), two WITH the higher time frame trend and two AGAINST that trend, which set of two are likely to be more profitable?

The COT Report
Since the currency market is decentralised there is no single exchange that tracks all trading activities. It’s therefore increasingly difficult to quantify the volume traded at each price level. In place of volume-based trading many traders have adopted the Commodity Futures Trading Commission’s Commitments of Traders (COT) report, which details positioning on the futures market, for more information on positioning and volume.

What is the COT Report?
The Commitments of Traders report was first published by the CFTC in 1962 for 13 agricultural commodities to inform the public about the current conditions in futures market operations The data was originally released just once a month, but moved to once every week by 2000. Along with reporting more often, the COT report has become more extensive and luckily for FX traders it has also expanded to include information on foreign currency futures. If used wisely, the COT data can be an extremely strong gauge of price action. The caveat here is that examining the data can be tricky, and the data release is delayed as the numbers are published every Friday for the previous Tuesday’s contracts, so the information comes out three business days after the actual transactions take place.

We’ll cover reading the COT report, and how to potentially profit from it, in the second part of this article.

« Mad Max or Blade Runner? December 19th 2012 Has The UK Refused To Spend Good Money After Bad, Or Simply Buying Time And Playing To The Gallery? »