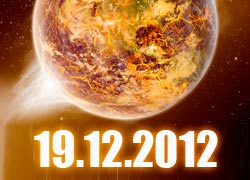 Doomsday scenarios are so overdone, similarly futuristic predictions as to how we'd all be living in the twenty first century have always disappointingly fallen short of the mark.

I can't be the only one feeling slightly let down by technology, yes we have our smart phones, can communicate over the new fangled 'inter web' have LCD tellies, there's McDonalds in every global town (well bar Rochdale in the North of England where it's now shuttered) but where's my jet pack using nuclear power in the garage of the high-tech home organised by robots? Goddamnit that was the REAL promise, not being surrounded by legions of the terminally intellectually challenged, "updating their status" or "Skype-ing"..

With the fact that many predictions always fall way short of targets I thought I might have a stab at a 'doomsday scenario', but this vision isn't set too far ahead, it's a prediction as to where we'll be in a year's time. I've also followed it with a more reasoned less 'end of days' gut instinct prediction as to where the key market levels will actually finish this time next year. Want to join in? Then put down your predictions in the comments section, perhaps we can get FXCC to stump up a prize for the winner who comes closest..

Bloomberg December 19th 2012
"With the Eurozone fiscal accord torn apart and the area now in total disarray the euro has fallen to values not seen since the introduction of the currency currently printing at 60 cents to the dollar. The contagion and impact on world markets has been catastrophic. Following the Fitch, Standard & Poor's and Moody's downgrades earlier this year of all Eurozone countries (and Great Britain) equity markets have collapsed lower than post collapse 2008-2009 levels.

Gold is back down to $700 an ounce, as the much anticipated QE4 didn't arrive. After the disastrous QE3 of March being immediately used to repair tattered bank balance sheets, many hedge funds have been wiped out in the final quarter of 2012, but not before liquidating all their assets.

The straits of Hormuz is still blocked and virtually impassable due to the sinking of three tankers by Iran in response to continued threats from Israel and the USA. After an attack on their nuclear facility put back their development of nuclear power a decade, Iran scuttled it's three oldest state owned tankers as a gesture.

Rescue and salvage attempts to clear the shipping lanes will take up to two years. Brent crude reached $185 a barrel in early trading. Despite the global slump Crude's value rose exponentially in June as Wikileaks revealed that during president Bush's administration the USA admin. knew that Saudi Arabia had over estimated its reserves by 65%.

Further leaks, suggesting the USA rushed forward their long term aims of middle east occupation as a consequence, has lead to further unrest in the region overall. As daily violence in Egypt continues, as the military refuses to give up power despite the election results in favour of the Muslim brotherhood, it's over shadowed by the 'brother versus brother' murderous turmoil in Libya, where rumours that the interim armed government militia have looted the returned funds and confiscated the gold reserves have led to further extreme bloodshed and violence.

The USA fifth fleet moored in Bahrain shelled the opposition forces in Manama who brought down their government where deadly clashes have escalated. The USA admin. is still blaming "Iran espionage" for the loss of one of the thirty vessels in the area (the name of which they refuse to release furthering suspicions that it may be a 'false flag' episode) and the fifty seven personnel who lost their lives.

The USA has been cornered during the severe stock market crash, attempting to raise their debt ceiling one more time to $17 trillion proved to be a step too far. With the USA general election now stalled (under emergency measures until at least 2013) republicans saw an unmissable opportunity to derail Obama's re-election campaign and locked down government causing all state employees to forgo another wage packet, the third this year. With the occupy movement gaining new strength and vigour the republican plan appears to have back fired as Occupy, with their aggressive Facebook campaign, are beginning to take steps to becoming a highly credible and electable third alternative to the current two party system.

This escalation of civil disobedience has rendered the country's government impotent, every recent vote in the house of commons has been a loss to the government and it looks increasingly likely that a vote of no confidence will take place in January. The UK's closest neighbour Ireland, who was firstly the poster boy for a Euro tiger economy and secondly the poster child for how austerity measures are supposed to work in practice, saw it's economy shrink by 7% in 2012, a Eurozone record implosion. Italy, Greece and Spain continue with implementing their austerity package despite the rolling strikes causing mayhem throughout each major town."