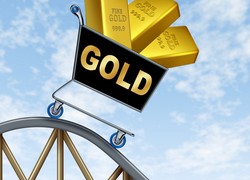 Gold Looking For A Bottom

Gold regained some power this morning after a drop in the prior session attracted bargain hunters and bottom feeders, but a robust dollar and fading expectancies of more financial easing in the USA made the metal exposed to more selling.

The physical market lacked activity as commercial users looked for a deal, while bullion holders shifted their cash into instruments after robust US economic information and accommodative financial policies by world central banking institutions sent speculators into risk assets. Gold moved up $4.69 an oz. to US$1,646.79 an oz. by 0500. (GMT)

Gold extended losses and slipped more than 2pc on yesterday – a day after the Fed Reserve offered no direction on further monetary policy or easing.

After slipping below US$1,650, it may go down further to US$1,600, as investors move to higher risk assets and the world economic situation seem to be under control. We might see a bounce but it will mosy likely be capped at US$1,675 to US$1,680.

A strong greenback is probably going to cap gains after the Fed Reserve promised to keep rates low till 2014. Investors could still ditch gold in favor of the greenback after Fed Chief Ben Bernanke offered no clues as to whether there’ll be another round of financial easing, an element which effectively decreases bullion’s safe-haven appeal.

Gold traded on Tuesday at US$1,675.96 an oz. its weakest since the first month of the year . Gold rose to a record of about US$1,920 in Sep on concerns over the Eurozone debt crisis could stall world expansion.

Some investors think Gold is just caught in a downdraft again after Bernanke did not actually mention any quantitative easing. But there’s still this deep-seated theme of central bank purchasing and powerful retail demand from developing East Asia, especially China. The bottom of the market is about should be around $1,650 currently, but there is a good chance that it will make one more run up to resistance at US$1,700.

The appraisal of the economy’s growth was unvaried from the Fed’s Jan statement. The Fed continues to see a slow but steady recovery. Markets are now looking to the Fed’s policy conferences in April and June for choices about any new directions for policy. The USD was broadly firmer on Wed. , having hit a seven-week high against a basket of big currencies after strong economic data, including the Non Farms report a few days prior. Economic data in the US once more indicated a slowly improving domestic economy, as consumer sales recorded their biggest gain in 5 months excepting rising gas costs.