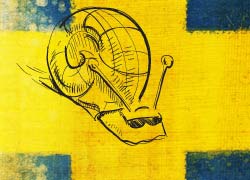 Sweden wants to think “outside the European box” after its heavy dependence on trade with the area was held accountable for a pointed economic and financial deceleration in quarter 4 of 2011.

Swedish trade minister Ewa Bjorling wants to double exports by 2015 thru measures that include chasing export markets outside the depressed EU Union such as Iraq, Africa and the BRIC states ( Brazil, Russia, India and China ). Dr. Bjorling commented in an interview

We can see that in the debt crisis and right after, those firms that have spread their wings in different markets outside Europe managed to deal with the crisis much better. We believe we really need to have other markets together with Europe.

In spite of solid state finances and an independent financial policy, Sweden’s reliance on trade with Europe has left it especially exposed to chaos in the eurozone sector.

After reports showed that Sweden has the best industrial performance among Scandinavian nations, Sweden dropped to the bottom in quarter four of 2011 when its economy contracted 1.1 %.

The fall followed two consecutive quarters of solid expansion and a stellar 2010, when GDP grew at a record-breaking 7.3 % in the final 3 months of the year.

With half Swedish GDP tied to exports, the great majority heading for other European countries, dramatic reversals are not unknown to the country of 9.3 million. Sweden’s economy shrank by 5.3 percent in 2009 during the global financial disintegration, only to bounce the following year.

“You see bigger swings in the Swedish economy compared with other states and the rationale is we’ve got an extremely high level of export dependence,” announced Robert Bergqvist, chief financial consultant at the Swedish Bank SEB. “Combine the elevated level of export reliance with a lot of cyclical exports and the swings get bigger.”

So far, strong finances have allowed the Nordic states to weather the eurozone’s crisis comparatively well.

Now, excepting oil-rich Norway, those states are predicted to start feeling the pressure. SEB expects Denmark and Finland’s economies to grow 0.5 % in 2012.

Though the bank had expected the Swedish economy to grow 0.7 percent in 2012, it has since then revised its forecast to 0.5 percent. Swedish GDP will probably continue its decline in quarter 1 before slowly picking up again, related Andreas Jonsson, senior economic analyst at Nordea Markets. “A year back we were talking about the Swedish tiger,” declared Mr. Jonsson.

Now we are talking about the Swedish snail.

Dr. Bjorling’s plan to raise Swedish exports calls for improving access to export markets for tiny and midsized firms, pushing thru a single European patent process and completing free trade agreements, including the one now being bartered between Canada and the ECU. Sweden’s low deficit, and its fast calls to action, will help Sweden weather the euro crisis and grow.

« The FED Is Your Friend Gold Looking For A Bottom »