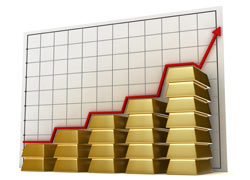 Gold climbed for a third day  as weak U.S. employment figures disappointed and a softer tone for the dollar was set Wednesday after the Federal Reserve kept interest rates on hold and Fed Chairman Ben Bernanke said he remained willing to buy more bonds should the economy need help.

Data showed first-time claims for unemployment benefits in the United States were broadly unchanged last week, while a longer-term gauge rose to its highest level since January, undermining the dollar.

The number of Americans who filed requests for jobless benefits was virtually unchanged last week at 388,000, the U.S. Labour Department said Thursday, keeping claims near their highest level of 2012. Claims from two weeks ago were revised up.

Support for gold would remain in the longer term in the form of central bank purchases and inflows into exchange-traded products, where investors tend to display less sensitivity to sharper declines in the gold price.

The figures helped gold extend the day’s gains, but the main impetus came from the Fed’s statement on Wednesday following a two-day policy meeting, in which it repeated its commitment to leave U.S. rates unchanged until at least 2014.

An environment of low rates is theoretically beneficial to gold in that it enables the metal to compete more effectively for investor cash. Low rates undermine the returns from assets such as stocks and bonds, which bear dividends and yields, and reduce the premium that investors forfeit by owning gold.

Gold could feel the pinch of a lack of consumer buying, particularly in India, where a rise in domestic prices deterred local jewellers and other consumers from purchasing.

Indian gold traders stayed on the side-lines as prices hovered near their highest level in two months due to firm overseas markets and a weaker rupee.  Akshya Tritya sales are estimated to have fallen by a half to 10 tonnes this year as interest was hurt by high prices and weakness in the rupee.