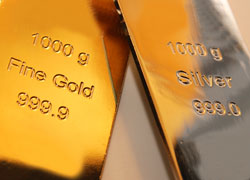 Gold And Silver This Morning

May 11 • Forex Precious Metals, Forex Trading Articles • 2774 Views • Comments Off on Gold And Silver This Morning

The Asian equities are trading mixed while the equities might pair in slightly after better banking and economic outlook. However, the Chinese inflation release early morning came out in line with expectation and may indicate some easing in near term restricting downside of metals pack.

From the economic data front, Chinese Industrial production may increase slightly after in-line PMI release while the retail sales may decline slightly after lower imports and may restrict fall of metals during the Asian session. However, the German CPI may remain similar but the Euro needs to be closely watched as the same remains weak and may further decline if Greece fails to form a coalition. From US, the producer prices may remain at a blend while the Michigan confidence may deteriorate late evening and may further weaken the metals pack.

Therefore, we expect base metals to remain firm during the Asian hours while weakness might creep in from the European session due to increased investor worries coupled with unending political turmoil and weak economic releases. Overall, initiating short position at every pullback might be recommended for today’s session.

After four sessions of continued mauling, gold futures prices saw a mild gain yesterday as the EU indicated Greece’s financial needs are covered. This morning the same again witnessed a downfall as investor’s are cautiously watching political turmoil in Europe. Asian equities have deviated from each other due to their own geographical fundamentals. While the Chinese inflation cooled, the better than estimated corporate earnings led the Japanese bourses higher.

The euro slipped once again amid controversy over the Greek re-election. We therefore expect another fatigued movement on gold prices. Investors risk appetite is expected to remain mute due to heightened policy uncertainty in the Euro zone. The likelihood of another voting in Greece has threatened the implication of austerity pledges.

This would keep the Euro under pressure. But, Spain is expected to reform its fragile banking sector by forcing them to sell the toxic assets. This restructuring however may be welcomed by the investors. So, little chance of European equities to gain lies there. Besides, Bernanke’s outlook on a healing and resilient US banking sector may provide a boost to the US stocks. Hence, gold might remain under pressure for the day. Chinese industrial production and retail sales numbers are due for the day. Both of these are expected to improve after they managed to cool inflation.

Later today, the US producers’ prices may remain unchanged or may even get lowered after the import price index fell below estimation. Hence, dollar might get support from the releases.

Silver futures prices have seen a wired move today at the early Globex session. As discussed in gold’s outlook, controversy over the Greek re-election may keep the Euro under stress and silver too is likely to remain weak for the day. However, Spain’s reformation of the banking sector by selling off the toxic assets may be cheered by the investors.

So, European markets may stay elevated for the day. The same is expected on US equities after Bernanke saw a curing banking sector. So, this may support the silver prices a bit in the evening. However, global weakness may weigh on to the prices as data expectation from the US may also be a supportive for dollar.

The current ratio as expected, has improved to 54.68 from 54.51 yesterday. Today as well we expect the ratio to move up as silver is more prone to a downside at a faster pace than gold.