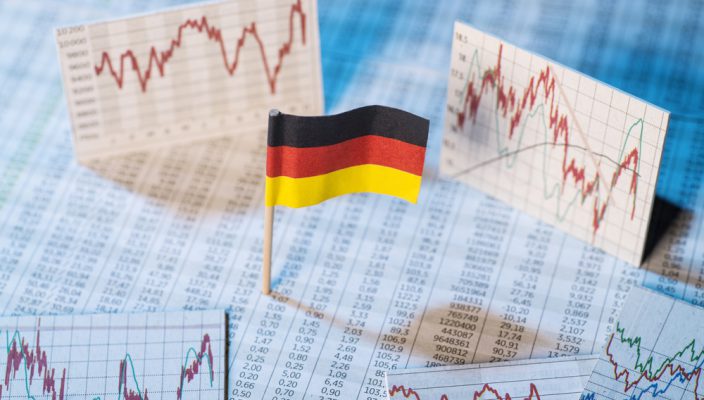 Consumer spending rose in Germany by 1.2% in the first quarter of 2019, German capital investment rose by 1.1%, whilst government spending fell by -0.3% in the same period. The figures painted a healthier backdrop for the German economy, that in Q3 to Q4 threatened to contract into a recession. Overall GDP growth for Q1 2019 came in at 0.4%, with year on year growth at 0.7%. As the engine of both Eurozone and European Union growth, the German economic performance is closely monitored, for signs of overall structural weakness in the wider European region.

Irrespective of the encouraging German GDP figure for Q1, at 8:20am U.K. time on Thursday, Germany’s leading equity market index the DAX, traded down -0.87%, France’s CAC down -0.12% and the U.K. FTSE 100 down -0.45%. Renewed tensions regarding trade wars and tariff implementations caused global market jitters; the Shanghai Composite closed down -1.36% and the CSI down -1.79%. The futures markets for USA equity market indices were pointing to a negative open when trading in the New York session commences; the SPX future was down -0.75% and the NASDAQ down -1.02%, at 8:30am U.K. time.

The dollar index, DXY, traded up 0.20%, trading at 98.23, whilst USD/JPY traded down -0.07% and USD/CHF traded down -0.03%, indicative of FX traders taking refuge in safe haven currencies as assets. Gold, XAU/USD began to rise in the early stages of the London-European session, as a move to safe havens accelerated into other assets; the precious metal traded up 0.10%, crawling above the $1,275 per ounce level.

The euro failed to make gains, despite the healthier German GDP growth data, the German manufacturing PMI curbed market sentiment optimism, coming in at 44.3, indicating that purchasing managers still have concerns, regarding the health of the overall business pipeline. This will be due to the renewed trade frictions the Trump administration has caused, by way of increased tariff threats on E.U. imports into the USA. Germany’s leading IFO business climate indicator confirmed purchase managers’ doubts, as the reading for May fell to 97.3. Other PMIs for E.Z. countries came in either above or close to the Reuters forecast, although the overall E.Z. PMIs for manufacturing and services, missed the forecasts. The composite reading for the single currency trading bloc came in at 51.6, falling from 51.7.

At 8:40am EUR/USD traded down -0.11%, as price breached the first level of support, S1, the euro fell versus both CHF and JPY, as safe haven currencies were in demand. EUR/GBP traded up 0.28% at 0.883, as price traded in a daily bullish range, threatening to breach the first level of resistance. The rise in EUR/GBP owed more to sterling weakness across the board, as opposed to euro strength. EUR fell sharply versus the majority of its peers, during the first stages of the London-European session.

The continual Tory party chaos is exacerbating any confidence in sterling and the U.K. economy. The prime minister’s cabinet suffered another high level cabinet resignation on Wednesday evening. Finally and collectively, FX analysts and traders are waking up the fact that; any replacement when Mrs. May inevitably resigns over the coming days, after a damaging internecine war for the leadership then ensues, will be a hard line Brexiteer, prepared to force through a no deal Brexit if necessary. Certain market analysts were stating that the U.K. and Europe is “not ready for a Johnson government” and that GPB/USD could retreat to the multi year lows of 1.200 printed in 2016, if a hard line Brexiteer takes up the position as prime minister.

GBP/USD continued its bearish trend, trading down for the sixteenth day in series and falling to a low not witnessed since January 3rd, 2019. At 1.261 the major pair referred to as “cable” traded down -0.37%, breaching the first level of support. At 9:00am sterling had registered falls versus its major peers across the board, as all GBP pairs (where GBP is the base pair) displayed similar patterns of price action behaviour.

Various Markit PMIs will be published for the USA economy during the afternoon trading session, as will be the latest weekly and continuous jobless claims data. New home sales in the USA are forecast to reveal a significant (month on month) slump by -2.5% in April, versus a 4.5% rise in March. Attention in late evening will turn to the latest New Zealand: import, export and trade balance data, figures that could impact on the value of the Kiwi dollar, particularly during a period when forex trading liquidity is far lower.

In the first hours of the Sydney session, the latest Japanese inflation data will be published, Reuters predict a rise in the key CPI level to 0.9% year on year up to April, from 0.5% in March. A figure which could cause reaction to the value of yen, if analysts and traders believe one of the four key arrows/components of Abenomics; forcing up inflation by way of a super loose monetary policy, is finally finding a foothold in Japan’s economy.