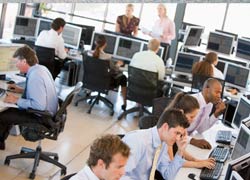 Forex Trading Rooms and The Double Jeopardy Issue of Latency

There comes a time in every forex trader’s initial development when you’ll eventually consider the option of paying for a trading room membership. The idea usually germinates as a consequence of a trading lull; you may be looking for a new direction having lost your way, or in need of company and given the isolation of our long distance marathon run it’s hardly surprising that we tend to gravitate towards like minded souls, particularly if those tortured trading souls have shared similar experiences. However, the over riding reason for joining a trading room is the reason we all trade FX, to make money…

Other than buying a black box forex trading system from an unknown source on the internet there is no other trading subject that can elicit and at times incite so much colourful opinion as the use of trading rooms. The usual criticisms are concentrated on the lack of profit made after a couple of months participation. The normal pattern is for the membership to be cancelled as the subscriber realises that the trading room model (in the forms currently offered) is “not for them”. The fledgling trader then parts company, generally on reasonable terms, feeling that the value for money has been reasonable and that some skills have been learned.

However, it’s not the trader’s fault that the room environment hasn’t worked, the trading room format, in the most popular guises currently offered, cannot and will not ‘work’. As to whether the provider is motivated by naive enthusiasm or something more sinister, in terms of possible and deliberate sharp practice is debatable. What is for certain is that purveyors of rooms are thankfully and finally receding as an offering in the forex industry. Hardly surprising given that amongst the many faults there is one insurmountable problem none can ever hurdle, the latency of market information and as a consequence the latency of the calls.

I recently received an invite to join a trading room, the geographical location should be an irrelevance and images of the rolling surf and Californian sunset failed to induce me, but what struck me as alarming were the very modest pip claims from the trading room provider. It transpired they were trying to market the very modest pip targets as reasonable, achievable, realistic when in fact such a low target level rendered the programme completely unworkable. As with many services they provided an unaudited report of their results, only recent results that were verified by testimonials. Again this looked on first inspection reasonable as opposed to realistic at least to the untrained eye. An average pip loss or gain per trade at circa ten pips, using a very basic ‘fire and forget’ system with a neutral R:R. The results suggested a win loss ratio of 2:1. Overall these modest claims serve as a very inviting opportunity for the inexperienced, but the plan really doesn’t stand up to closer scrutiny.

As a trading plan there are many successful traders that could stick resolutely to their trading plan whilst trading a mechanical strategy based on a 1:1 ROI, using an Expert Advisor plugged into the ‘back end’ of Meta Trader could potentially reap rewards. But the thought remains that retail traders, (particularly the novice traders that trading room vendors prey upon) aiming for ten pips only, could be picking up pennies in front of the virtual steam roller. Many experienced traders would consider it a reckless strategy with only a ten pip stop given the propensity for the occasional fill to be slipped and a spread of 2-3 pips on many currencies leaving no room for error, but the attraction for novices is obvious given the over riding pre occupation with tight money management. But can such a strategy survive the latency evident in a trading room environment? No is the short answer. As proof let’s consider our California Sunset model and put the strategy to the test.

When back testing strategies it’s always recommended that we take the worst points on our range, for example, the points on a candle that would return the worst case scenario as opposed to the best returns. In comparing and contrasting trading room environments this prudent method removes excessive optimism and helps isolate the genuine returns we can expect to see. We’ll use EUR/USD as our comparison given it’s the most heavily traded currency pair with the lowest spread. We’ll use a spread of two pips for our comparison, whilst on the face of it that spread appears expensive it covers commission costs and is a reasonable quote based around most market conditions.

The Californian Sunset room, using their ten pip stop loss, now has only eight pips ‘in play’ before the trade has failed which can be easily taken out by noise, however, there’s a stone dead killer that renders the discussion moving forward redundant, the double jeopardy of the lag. Both in terms of trade set up and execution the lag kills this trading room initiative and no amount of preparedness or investment in improved personal technology can circumnavigate these two critical and terminal lagging issues.

To imagine that you’ll be getting exactly the same price as the trading room is mistaken, to then suppose that you’ll get the same fill likewise, and using a fast moving strategy the propensity for slippage, albeit positive on occasion, is heightened. Therefore moving aside the doubts as to the overall viability of any strategy aiming for ten pips on a 1:1 basis, the ability to execute trades as per the trading room’s instruction is severely compromised when attempting to trade over a peer to peer set up. Therefore questions need asking as to the probity of the trading room provider, surely they are aware that the lagging issues will kill their proposition and are therefore representing something that is at best naive or at worst dishonest? One aspect is sure, they cannot be and are unlikely to have ever been successful traders using such a strategy.

What we’ve indirectly discovered is a test for trading rooms that we can conduct even before isolating the strategy and deciding whether or not there’s any educational benefits to becoming a member; will the room and strategy comply with the latency test? This is not a technology issue but a trading issue, can their strategy simply withstand their own mechanics. Having summarily dismissed a service aiming for ten pips are there services out there that are the genuine article? It’s highly unlikely.

Despite the fact that many operators will stress their trader educational services, over and above any market calls they make, this is generally a deflection as the room wants to promote dependence as opposed to independence, they want long term clients not clients they can graduate. If it’s trading company you’re after then why not put in the effort to create a Skype trading group were you can genuinely share ideas, strategies at zero cost and if you need a Californian sunset and the sound of crashing surf try Googling for webcams.

« Oh those Germans and Their Wacky Sense of Gallows Humour.. How eBay Sniping Can Reveal the True Health of the UK's Retail Sector »