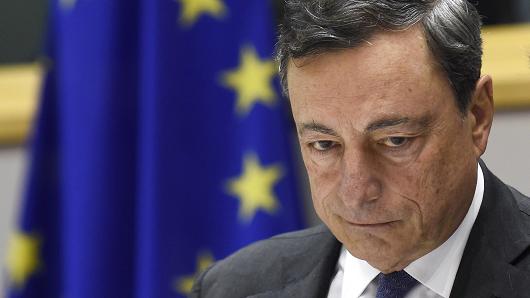 Focus will be on Mario Draghi on Thursday, when he delivers a statement regarding the ECB’s monetary policy, after the interest rate decision is revealed.

Jan 24 • Uncategorized • 1368 Views • Comments Off on Focus will be on Mario Draghi on Thursday, when he delivers a statement regarding the ECB’s monetary policy, after the interest rate decision is revealed.

On Thursday January 25th, at 12:45pm U.K. (GMT) time, the Eurozone’s Central Bank the ECB, will announce their latest decision regarding the E.Z.’s interest rate. Shortly after (at 13:30pm), Mario Draghi, the president of the ECB, will hold a press conference in Frankfurt, to outline the reasons for the decision. He’ll also deliver a statement discussing the ECB monetary policy, covering two main aspects, firstly; the potential further tapering of the APP (asset purchase programme). Secondly; when the time is right to begin raising the E.Z. interest rate, from its current 0.00% rate.

The widely held consensus, gathered from the economists polled by Reuters and Bloomberg, is for no change from the current 0.00% rate, with the deposit rate to be kept at -0.40%. However, it’s Mario Draghi’s conference that’s likely to be the main focus. The ECB began to taper the APP in 2017, reducing stimulus from €60b to €30b a month. The initial suggestion from the ECB, once the taper was invoked, involved an end to the stimulus programme by September 2018. Analysts are unified in the view that; only once the APP ends, will the central bank look towards any potential potential rate rise.

The common sense, pragmatic view, would be to analyse the gradual withdrawal of the stimulus, before raising rates. With inflation at 1.4% and a level of 2% being voiced by the ECB as a target level, the central bank could be justified in stating they still have enough slack and room for manoeuvre, to keep the stimulus programme alive, beyond their original horizon.

EUR/USD rose by circa 15% in 2017, the major currency pair is up approx. 2% in 2018, many analysts cite 1.230 as a key level at which the ECB considers the euro to be at the right value, above that could represent a long term barrier to the Eurozone’s manufacturing and exporting success. Although imports, including energy, are consequentially cheaper.

Whilst various ECB policy hawks on the committee, such as; Jens Weidmann and Ardo Hansson, have called for a tightening of the monetary policy in the first half of 2018, other ECB officials have recently voiced concerns that the ECB will continue to adopt a cautious approach and adapt policy on a reactive, as opposed to pro-active basis. ECB Vice President Vitor Constancio expressed concerns last week over the euro’s “sudden movements, which don’t reflect changes in fundamentals”. Whilst Governing Council member Ewald Nowotny recently stated that the euro’s recent appreciation is “not helpful” to the Eurozone’s economy. The ECB has no exchange rate target for EUR/USD, however, Nowotny insisted the central bank would monitor developments.

In simple terms; Mario Draghi as the focal point for ECB policy and the voice of forward guidance, may be of the opinion that the euro is well positioned versus its main peers and the initial reduction of the APP has worked well; causing no dramatic alteration in the currency’s value, or harm to the economic performance of the E.Z. Therefore his forward guidance at the conference and the monetary policy statement, is likely to be neutral, as opposed to dovish, or hawkish.

KEY ECONOMIC INDICATORS FOR THE EUROZONE