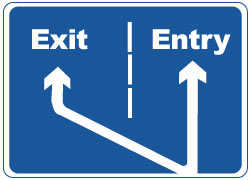 Every Exit Is An Entry Somewhere Else

“Anyone can see an entry, the real skill is exits and over a lifetime of trading you’ll never get them right and you’ll never be 100% happy with them..”

Many traders reach a ‘paralysis’ stage in their trading, they feel and honestly believe they’re doing everything correctly; their psyche is sound, they’re only risking 1% per trade (therefore their money management technique is spot on) and they’re patiently waiting for their set up to occur before they “pull the trigger”, but they’re not “winning”. The key reason they’re not winning is “that Goddam market just ain’t behaving”, at least not in the way they’d like it to. Guess what? That feeling of; “I’ve ‘placed my bet’ and I’m now at the mercy of the market” never leaves us, we have to accept that the only control we have is trade management for the lifetime of the trade.

However, we can exercise elements of control, we can adjust: our stop, our trailing stop, our target, we can close the trade at any time, but we can’t control price. This is why it’s crucial to exercise control and constant vigilance of what we can control, including exits.

All experienced traders will testify to the feeling of having left too much on the table when exiting a trade, and legendary forex traders will always claim that they “never got their exits right and never will”. It’s part of the paradox of the industry and profession and as such it’s incumbent on us to take a professional and actuarial attitude towards exits by attempting to find a rational exit strategy, keeping R:R at 2:1, (winners versus losers) is as good as it gets. The skills of; entry, money management and the beginnings of developing a strong psyche can be learned and or taught in a relatively short space of time. Only the market can ‘teach’ you exits and having to accept that you’ll never get them right it is fact one of the biggest challenges traders need to face up to.

There is a very misleading saying in the Forex community that appears to have become embedded as folklore; “never let your winners turn into losers”. However, as with many aspects of trading, it’s never that straightforward, if we logically reverse that process how would you deal with a trade that was in the red for days, that finally goes into profit, would you close it immediately? As a swing trader it can be normal for a trade to be in the red for days and then eventually move into profit. There is undeniably a certain truth to the folklore saying and we’ll revisit it later on in this article.

When and how you exit your trades, depends on your trading plan, all proficient exit techniques have something in common, they are done according to your plan, emotions should have no influence. It doesn’t matter what system you use, the same principles should always apply. Most fledgling traders focus singularly on the entry signal and optimising the entry price, if price on the chart looks more likely to move in the direction indicated by the signal they take the trade. This reaction should never change if the trader is 100% committed to their set-up and ‘edge’. In this article we’ll discuss what I term “two exit trading”, firstly two cast iron exit basics that we should all adhere to and secondly a two exit strategy that can alleviate some of the potential disappointment in not getting all of the trend movement.

Two Exit Trading
Forex traders often exit a Forex trade positively then look on as price travels another 100 pips in the ‘right’ direction. Similarly it’s common to witness price retrace back to your entry point or into minus territory as traders attempt to squeeze the last 5 pips out of a good FX trade. Knowing when to “cash in” a forex trade can be one of the most challenging aspects of Forex trading. However, there can be a more profitable and less stressed method of trading by identifying two exits before opening the position, have a stop exit and a target exit. The stop exit can also be a trailing stop exit.

Hesitation and the tendency to hold on to a losing position, in the hope that it might turn around and prove you right, is one of the most common trading errors. The only rational response to a loss on any trade of more than the one per cent risked is to exit and to potentially re-enter if the market turns favourably in the other direction.

The trading rule of “cut losses, let profits run” encourages traders to quit losing trades before losing too much, and ensures that the trend is over before getting out. This may involve coming to terms with unexpectedly strong emotional reactions to the inevitable losing trades. In forex trading the exit strategy really is arguably everything. Many fledgling traders spend all their time developing a winning system, once done they may employ a strict stop loss policy to minimise their losses. However they neglect the exit strategy at the onset due to enjoying the experience of profitability.

Two Part Exit Trading
One of the most effective strategies traders favour is the two part exit strategy. This is a strategy used to some success when swing trading off a 2-4 hr strategy, and it’s arguably the main reason why this system is so profitable.

Trading, for example, the AUD/USD, EUR/USD, EUR/JPY and USD/JPY pairs using this method the exit strategy is set in stone. Once the trade is in profit by 50 points close half the position and let the other half “run”, moving the stop loss up to the break-even point. the suggestion for USD/JPY is to take half off at 30 pips.

In adopting this method traders can guarantee profits from most of the profitable trades they enter, the benefits are for a “free trade” position with the second half of the position, therefore traders can hold out for the possible really big gains from the comfortable position of knowing that they’ve secured a minimum should the trade reverse.

The only complexity to what is a simple concept is deciding where to exit the second half of the position when trades are profitable, gut instinct is not necessary as using technical indicators, perhaps in conjunction with: support and resistance levels, large ‘looming’ round numbers, or significant moving averages can be used.

There can be another cautious addition to the slight complexity of this method, traders could take two trades, one at full position size the other at half position size. Once the initial target is reached the second trade, at half the position size, is left to ‘exhaust’ until the price action or preferred indicators suggest the trend is finished.

Summary
When entering Forex trades the trading signals are aligned ticking all the entry criteria, the entry is the straightforward part of the process. When price moves in its predicted direction the trade enters an area where the trade is dependent of the volatility of the trade move to succeed. Using the half off method, and for added caution perhaps using half position size, by taking two identical trades at the outset, can be a satisfying way to ensure that the trader captures most of the trend. Even relatively inexperienced traders can easily adopt and adapt this technique to enjoy success.