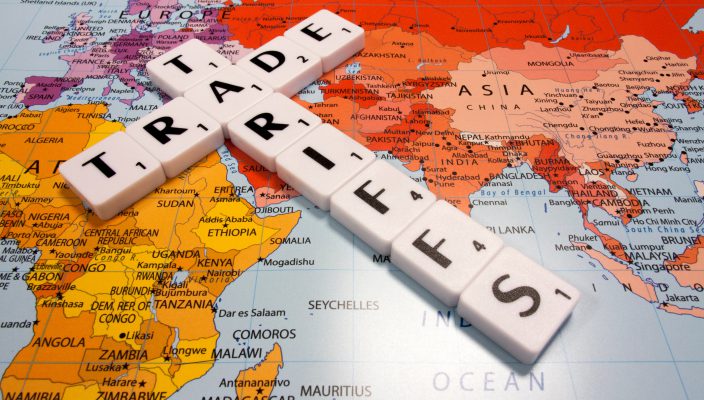 The euro rose versus several of its peers during Wednesday’s afternoon trading session, after Trump took to social media to announce that he may delay the implementation of auto import tariffs of 25%, on autos from Europe, for six months. Such an announcement was also a boost to European manufacturers such as: Mercedes-Daimler and BMW. However, the short term spike simply aided a recovery in the value of the euro, which had languished in negative territory before the announcement. At 20:50pm U.K. time on Wednesday May 15th, EUR/USD traded at 1.120, flat on the day, close to the daily pivot point, after whipsawing in a wide range, oscillating between initial bearish and later bullish conditions. Eurozone equity indices closed the day up; DAX up 0.90%, and CAC up 0.62%.

Versus GBP the euro registered significant gains, as Brexit issues reappeared to cause a GBP sell off across the board, versus its peers. At 21:00pm EUR/GBP traded at 0.872, up 0.48%, having breached R2, rising through the 0.870 handle for the first session since February 19th 2019. Sterling slumped as the chaotic situation regarding Brexit re-emerged, as prime minister May announced she’d bring the withdrawal agreement (WA) back to parliament for a vote, for its fourth time. She’s aiming to bring it to the House of Commons between June 4th-7th, after the euro elections. The twisted logic apparently involves receiving such a battering in the euro MP elections, that both main parties’ Westminster MPs will be so shocked by the results, they’ll desperately vote for the WA (after the fourth time of asking), in order to prevent any more fallout and loss of vote share.

The only problem with such a cunning plan, is that the vast majority of MPs still won’t vote it though, no matter how much it’s sweetened. Moreover, the Tory MPs jostling for her job as leader and prime minister, will simply take the euro election failure, as an opportunity to remove her. At 21:00pm U.K. time, GBP/USD traded down -0.48% and at 1.284 the bearish price action saw price breach S2 and fall below the 200 DMA, sited at 1.295. Price reached a low on Wednesday afternoon not witnessed since late February 2019. Sterling registered similar falls versus the majority of its peers. The U.K. FTSE 100 closed the day up 0.76%.

U.S. equity indices experienced a positive New York trading session, the NASDAQ closed up 1.13% and the SPX up 0.63%, the easing of trade fears and the lack of negative tariff rhetoric speak over the past 48 hours, has helped dampen down the inflammatory situation. In terms of economic calendar data published for the USA on Wednesday, advanced retail sales and other retail sales metrics missed the forecast by some distance, by printing negative readings. Industrial and manufacturing production also printed surprising negative readings for April. Questions regarding the overall foundations of the USA economy were largely ignored and overpowered, during the risk on mood, which dominated the New York session on Wednesday. The Canadian dollar rose versus its peers as CPI came in at 2.0%, whilst existing home sales in Canada beat the forecast, coming in up 3.6% in April. At 22:00pm USD/CAD traded down -0.10%, EUR/CAD down -0.32%.

The momentum for CAD may continue on Thursday if the manufacturing data published at 13:30pm U.K. time, comes in close to the Reuters forecast at 1.5% growth for March. Economic calendar events for the USA mainly concern housing data; housing permits and building starts are forecast to reveal a significant improvement in the month of April, when the data is published at 13:30pm. The latest weekly and continuous jobless claims are also published on Thursday, the prediction is for little change, in comparison to the previous week.

At 21:20pm on Wednesday evening, the dollar index, DXY, traded up 0.06% at 97.59. USD made gains versus several peers, but USD/JPY traded close to flat at 109.58, after whipsawing in a narrow range, between the daily pivot point and the first level of support. The major pair is down circa -2.12% monthly, as investors have sought safe haven refuge in yen. USD/CHF traded close to flat and close to parity at 1.008, down -1.00% weekly. Similar to yen, the Swiss franc has also attracted safe haven interest over recent sessions, after the Trump administration escalated the trade dispute with China.

« Chinese equity markets rise sharply, despite the publication of data which missed forecasts, German GDP missed annual growth target, Major FX pairs trade in tight ranges. Are moving averages some of the most overlooked and underrated FX technical indicators there are? »