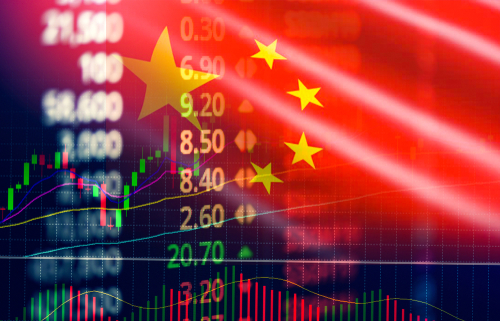 The Shanghai Composite index fell by -1.20% during the Asian trading session on Thursday morning, as critical data relating to the country’s economic performance, missed the Reuters forecasts. Industrial production for the globe’s second largest economy, came in at 5.6% growth (year on year) up to February, falling from 6.20% growth in the previous month. Sentiment in China has also waned as a consequence of no progress being made, with regards to the trade war and tariff threats from the USA. An impasse which, despite falling off the financial media’s radar over recent weeks, is still at the forefront of analysts’ minds.

After the Trump administration has pushed back their threat; to apply up to 25% tariffs on up to $200b of Chinese imports from the March 1st deadline, market analysts still await Trump to confirm the actual date he’ll meet with the Chinese premier, to confirm that the tariff threats are history. Until such time, Chinese markets and indeed the Chinese economy, may continue to slip. At 8:40am U.K. time, USD/CNY traded up 0.27% at 6.720, up 6.31% yearly. The YoY fall in the value of the yuan versus the dollar should, in theory, have helped the stronger USA dollar provide better value for importers and reduce the balance of payments and trade balance with China significantly. However, both figures reached recent record highs, during 2018 and early 2019.

USA equity market indices have experienced a risk on boost this week, after slipping back in the previous week’s trading sessions. The SPX reached a level on Wednesday March 13th, not visited since November 2018, as it breached the critical 2,800 handle, whilst clawing back all the losses accrued, during the sharp December 2018 sell off. Futures markets were indicating a positive open for the main indices, once New York trading begins on Thursday afternoon; SPX up 0.12% and the NASDAQ up 0.19% at 9:00am U.K. time. FX and equity index traders will focus on the latest unemployment claims and up to date import and export data, due to be published during the New York session.

Whilst sterling traders might be tired of reading news regarding the U.K. Brexit debacle, the situation has offered up significant trading opportunities over recent days/weeks, as currency pairs such as cable, GBP/USD, have traded and whipsawed in wide ranges, oscillating between bullish and bearish conditions. Each time critical votes are taken in the House of Commons, or the U.K. govt makes overtures to their remaining E.U. partners, the U.K. pound reacts. Therefore, FX traders need to ensure they’re in a position take advantage of these developments, which requires constant reference to the economic calendar, whilst noting which U.K. Parliamentary votes are scheduled, on a day to day basis.

On Thursday evening, U.K. MPs will vote on a motion requesting a delay from the E.U. to the exit, due to take place on March 29th. Whilst the vote is expected to be an overwhelming request in favour of a delay, the E.U. negotiators need to be convinced that there’s a reason for any delay, over and above an opportunity for U.K. lawmakers to waste more time. Analysts are undecided which way the E.U. will vote, in a meeting scheduled for March 21st. If they refuse an extension then, once again, sterling could come under intense scrutiny and fervent speculation.

At 9:45am U.K. time, GPB/USD traded down 0.20% at 1.326, falling back from the 1.330 level printed on Wednesday, remaining circa 320 pips above the 200 DMA, sited at 1.299. EUR/GBP traded close to flat at 0.853. FX traders and analysts might consider the recent bullish sterling sentiment as overbought, despite the RSI strength indicator remaining below the 70 level, often regarded as the key overbought metric.

Eurozone equity markets were generally bullish during the London-European trading session; at 9:50am Germany’s DAX traded up 0.45% and France’s CAC traded up 0.65%. EUR/USD traded down -0.16% at 1.131, as German inflation fell to 1.50% annually. The U.K. FTSE traded up 0.39%, the only significant U.K. calendar news came from RICS a housing trade body, who suggested activity; sales, new instructions, building and development, etc. had plunged to a level not seen since 2011. Their house price balance came in at -28 for February, falling from -22. Naturally, Brexit fear was used as the pre packaged excuse, offered up as a reason for the fall.