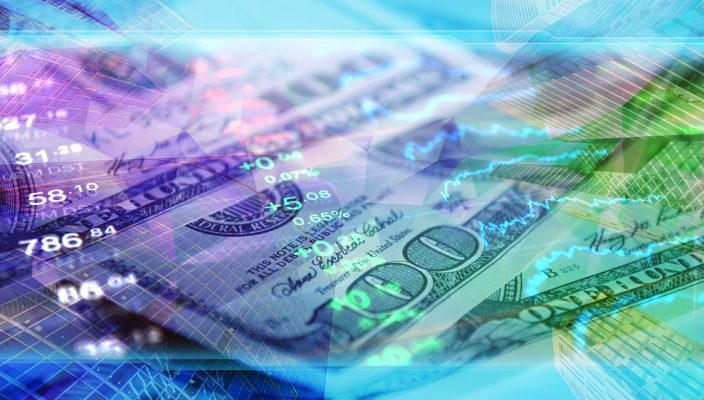 The Aussie dollar immediately slumped versus the U.S. dollar, during Wednesday’s Sydney-Asian trading session. The CPI reading (year on year) up to March came in at 1.3%, falling from 1.8%, dampening any expectation that the RBA central bank would be raising the interest rates, during  the short to medium term, in 2019. AUD/USD slumped during the early trading sessions and once New York opened, the slump (in all Aussie pairs) continued; by 22:00pm AUD/USD traded down -1.23%, having crashed through the three levels of support, to reach a three week low, maintaining position just above the 0.700 handle, at 0.701.

Similar patterns were observed by all currency pairs where AUD was the base. The kiwi dollar also slumped, due to its close correlation  with the Aussie and the countries’ close economic ties. NZD/USD traded down -0.99%, plunging to a 2019 low, having traded in a downward trend, for the majority of April.

USA equities failed to hold the record (or close to record) highs printed during recent sessions, the SPX closed down -0.22% and the NASDAQ down -0.23%. The marginal fall needs to be kept in context; the NASDAQ is up over 22% year to date, whilst the SPX is up 16.8%, both indices completely recovering the losses incurred during the final two quarters of 2019, to post record highs, over the recent sessions. WTI fell by 0.66% on the day, as the DOE published reserves that failed to take the markets by surprise. Oil analysts and traders also began to recalibrate their estimates the impact that the USA supposed embargo on Iran’s oil sales, will have on global markets for pricing oil.

The euro fell to a twenty two month low versus the U.S. dollar during the trading sessions on Wednesday. Whilst the fall was partly attributable to USD strength across the board, the latest soft data sentiment readings for the German economy, published by the IFO, missed the Reuters forecasts, adding to concerns that the German economy could be entering a technical recession, in certain sectors.

During Wednesday afternoon, Canada’s central bank, the BOC, announced no change to the benchmark interest rate of 1.75%. During the monetary policy statement delivered shortly after the decision, the Governor of the BOC Stephen Poloz lowered the bank’s growth expectations for the Canadian economy. Thereby ending speculation that the benchmark rate, will be raised during the remaining quarters of 2019. At 22:30pm U.K. time, USD/CAD traded up 0.53%, the pair breached R2, immediately as Governor Poloz delivered his assessment.

Trying to work out the potential, current, ramifications of the various: breakups, recriminations and threats to the U.K. Tory party, by its own MPs and supporters, is an impossible task. On Wednesday the government attempted to lay blame for the lack of progress on Brexit, at the feet of the opposition Labour Party. Other MPs left the party to join new parties, the 1922 committee met to discuss methods to remove a prime minister and leader who’s popularity had sunk to record lows, whilst the government also announced they had no intention of fighting the European elections. Therefore, by abstention, they’re content to allow new, ultra right wing parties, to fill their political void.

The next key date for FX analysts and traders of GBP to note, which could cause volatility to rise in sterling trading, is May 22-23rd, dates by which the U.K. must either declare it’s competing in the forthcoming June E.U. elections, or that it’s reached a withdrawal agreement through Parliament. However, before such time the House of Commons could agree a consensus and vote for the withdrawal agreement, at the fourth time of asking. Despite the U.K. deficit reaching a seventeen year low, GBP/USD fell by -0.30% on the day, falling through the 200 DMA to reach a low not printed since March 19th, whilst surrendering position at the 1.300 handle. Versus the majority of its other peers GBP experienced mixed fortunes; rising versus: EUR, AUD and NZD, falling versus JPY and CHF.

Thursday’s key economic data events involves durable sales orders for the USA, expected to show a rise to 0.8% in March according to Reuters, which would represent a marked improvement from the -1.6% reading recorded for February.  Thursday is the traditional day when the USA publishes its weekly and continuous jobless claims, having filed record low numbers recently, the forecast is that a slight rise (in both counts) will be registered.

« What is volatility, how can you adjust your trading strategy to it and how can it impact on your trading results? Yen rises versus the majority of peers, as BOJ keeps key interest rate at -0.1%, U.S. dollar maintains recent heights, as FX traders turn their focus to Friday’s GDP data. »