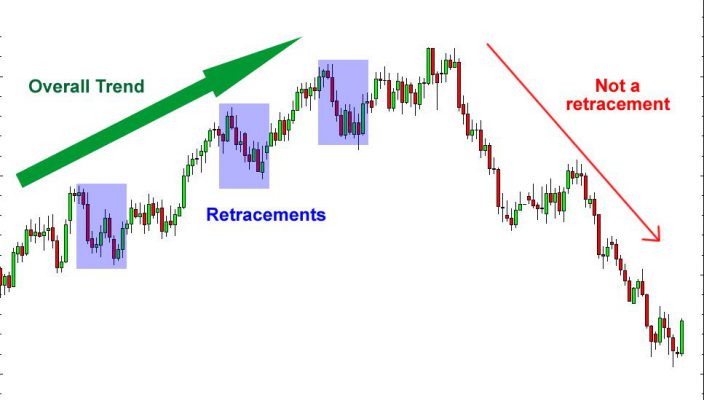 Are retracements different than reversals?

Apr 1 • Forex Trading Articles • 514 Views • Comments Off on Are retracements different than reversals?

Whenever there is a reduction in the value of your stock, you might wonder whether it is long-term or a blip in the market. Several people even sell the stock in such cases. But, only a few days later, it reaches new highs. It is a popular and annoying type of situation.

I believe it is difficult to get out of such a situation. However, if you’re familiar with trade retracements and reversals, you might be able to handle it. Then, you’ll start discerning improvements in performance. Let’s plunge into it.

Whenever the price rises, it establishes a new high. Then, it starts to rally before returning to the previous low when it falls. This activity is a precept of an uptrend, in which there are higher highs and lower lows.

While this is happening, the trend is upward. Only when an uptrend makes a lower low and lowers high is something wrong. This implies a trend reversal.

A reversal occurs when an asset’s price trend reverses. It implies that the price will most likely remain in the reverse direction for a longer duration. But, the price may also return to the previous position in a pullback.

At first glance, you might not be able to tell whether it is a pullback or a protraction of the reversal. This is because the change can occur suddenly or gradually.

Main distinctions between retracement and reversal

It is critical to understand the difference between a retracement and a reversal. When classifying a price movement, you should consider a few key differences between the two.

There is still buying interest during a retracement. However, there is little or no buyer interest in case of reversal.

A retracement can last up to 2 or 3 weeks, whereas a reversal can last several weeks or months.

The candlestick charts during a retracement show a bunch of indecision candles with long tails and tops. A reversal, on the other hand, is characterized by reversing candles.

A retracement usually occurs right after large gains. On the contrary, a reversal can happen absolutely at any time.

The primary distinction between the two is that retracements are momentary and short-lived. A reversal occurs when the trend changes course. They imply that prices will continue to move in the new direction for a prolonged period. You must learn to distinguish between retracements and reversals as a trader. Knowing about these, you can secure yourself from potential dangers. Otherwise, you have the risk of squandering opportunities.

« How to use the Super Trend indicator for Forex? Bond Markets in red: What to expect? »