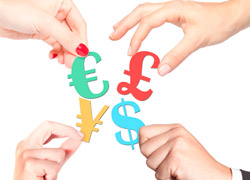 So what are we 'selling or buying' in our forex markets? The answer is "nothing" our retail FX market is purely a speculative market. No physical exchange of currencies ever takes place. All trades exist simply as computer entries and are netted out depending on market price. The banks provide the liquidity we trade that liquidity through our 'pure-play' ECN broker.

In order to gain a complete understanding of what forex is, it's useful to examine the reasons that have lead to its existence in the first place, a specific insight into the reasoning behind foreign exchange as a medium of exchange of goods and services.

Our ancestors conducted their trading of goods versus other goods using a system of bartering, this was incredibly inefficient and required lengthy negotiation. Eventually metals such as bronze, silver and gold came to be used in standardised sizes and later grades (purity) to facilitate that exchange of merchandise. The basis for these mediums of exchange was accepted by merchants and the general public, its practical variables and qualities, such as durability and storage, gained the metals popularity. Fast forward to the late middle ages and versions and varieties of paper IOUs began gaining popularity as an exchange medium backed by the metals.

The advantage of carrying around paper IOUs versus carrying bags of precious metal was slowly recognised through the ages. Eventually stable governments adopted paper currency and backed the value of the paper with their gold reserves. This came to be known as the gold standard. Taking a massive leap forward to modern times The Bretton Woods accord in July 1944 fixed the dollar to 35 USD per ounce and other currencies to the dollar. Then in 1971, president Nixon suspended the convertibility to gold and let the US dollar 'float' against other currencies. Since then the foreign exchange market has developed into the largest market in the world with a total daily turnover of about 3.2 trillion USD. Traditionally an institutional (inter-bank) market, the popularity of online currency trading offered to the private individual has democratised forex and widening the retail market.

The foreign exchange market is the most liquid financial market in the world. Traders include large banks, central banks, institutional investors, currency speculators, corporations, governments, other financial institutions, and retail investors. The average daily turnover in the global foreign exchange and related markets is continuously growing.

According to the 2010 Triennial Central Bank Survey, coordinated by the Bank for International Settlements, average daily turnover was US$3.98 trillion in April 2010 (vs $1.7 trillion in 1998). Of this $3.98 trillion, $1.5 trillion was spot transactions and $2.5 trillion was traded in outright forwards, swaps and other derivatives.

The primary reason the FX market exists is to facilitate the exchange of one currency into another for multinational corporations that need to trade currencies continually (for example, for payroll, payment for costs of goods and services from foreign vendors, and merger and acquisition activity). However, these day-to-day corporate needs comprise only about 20% of the market volume. Fully 80% of trades in the currency market are speculative in nature, put on by large financial institutions, multibillion dollar hedge funds and even individuals who want to express their opinions on the economic and geopolitical events of the day.

Because currencies always trade in pairs, when a trader makes a trade he or she is always long one currency and short the other. For example, if a trader sells one standard lot (equivalent to 100,000 units) of EUR/USD, she would, in essence, have exchanged euros for dollars and would now be "short" euros and "long" dollars. To better understand this dynamic, let's use a practical example. If you went into a major out of town retailer and bought a LCD 3D tv for €1,000 you would be exchanging your euros for a tv. You would basically be "short" €1,000 and "long" one tv. The store would be "long" €1,000 but now "short" one tv in its stock. This principle applies to the FX market, the key difference is that that no physical exchange takes place, all transactions are simply computer entries.

Despite the fact that a minority of retail traders trade exotic currencies such as the Thai baht, Polish zloty, the Swedish krona, or the Mexican peso the vast majority ( particularly in our retail community) trade the seven most liquid currency pairs in the world, which are the four "majors" and the three pairs recognised as the commodity pairs. In everyday foreign exchange market trading and news reporting, the currency pairs are often referred to by nicknames rather than their symbolic names. These are often reminiscent of national or geographic connotations. The GBP/USD pairing is known by traders as the cable, which has its origins from the time when a communications cable under the Atlantic Ocean synchronized the GBP/USD quote between the London and New York markets. The following nicknames are common: Fiber for EUR/USD, Chunnel for EUR/GBP, Loonie and The Funds for USD/CAD, Matie and Aussie for AUD/USD, Geppie for GBP/JPY, and Kiwi for the New Zealand Dollar NZD/USD pairing. Nicknames vary between the trading centers in New York, London, and Tokyo.

These currency pairs, along with their various combinations (such as EUR/JPY, GBP/JPY and EUR/GBP), account for more than 95% of all speculative trading in FX. Given the small number of trading instruments – only 18 pairs and crosses are actively traded – the FX market is far more concentrated than the stock market.

There are many official currencies that are used all over the world, but there only a handful of currencies that are traded actively in the forex market. In currency trading, only the most economically/politically stable and liquid currencies are demanded in sufficient quantities. For example, due to the size and strength of the United States economy and the Eurozone the American dollar and the euro are the world's most actively traded currencies. In general, the eight most traded currencies (in no specific order) are the U.S. dollar (USD), the Canadian dollar (CAD), the euro (EUR), the British pound (GBP), the Swiss franc (CHF), the New Zealand dollar (NZD), the Australian dollar (AUD) and the Japanese yen (JPY).

Most experienced traders attest to the massive role probabilities play in terms of their trading success. The vast majority of these successful traders also testify to the fact that they only trade the majors and or the commodity based pairs. There are many reasons for this but here's just three key reasons. Firstly the spreads are the lowest, secondly the deeper pools of liquidity ensure better fills during even the most volatile periods and thirdly due to the aforementioned factors price is (probably) more likely to behave in a predictable fashion. The major pairs are quite simply the most predictable. Technical analysis works very well with most forex pairs, but this is particularly true of the major pairs.

This is due to the fact that millions of traders, from all corners of the globe, are looking at the same price patterns and indicators and price behaviour. There are many theories that the anticipated price moves tend to become self-fulfilling. Traders tend to buy and sell the major pairs at certain points, whether it's a major area of resistance or support, or whether it's a major fibonacci level, or key levels such as the 200 ema/ma. Certainly this is where the big players hunt.

Ultimately it's up to each individual trader's discretion to decide which pairs they want to trade, however, concentrating on trading no more than four pairs is the right route forward for fledgling traders. This makes it far easier to monitor and adapt to learning the characteristics of each pair, traders can clearly see how they respond to various technical indicators, and you can determine which times of the day are the most profitable for each of these pairs. Traders can also monitor how each currency behaves to fundamental news announcements, for example, policy statements by the SNB Swiss National Bank can cause extremes of price behaviour, 'spikes'.

Over recent weeks not only have FX traders had to cope with some of the most volatile conditions experienced since 2008-2009 they've been under their own self inflicted pressures. It'd be only 'human' to question your edge over the past few months. Whilst your MM and mind may have been robust and steadfast unless you experienced 2008-09 then the 'behaviour' of the FX markets recently will have been quite a shock. However, despite it all the feedback is that money has been made by FX traders. If we accept that the only twenty percent of retail traders are successfully drawing down an income from this business and that the vast majority only swing trade the trend on the major four pairs plus the three commodity pairs and that they've coped well during the recent maelstrom then we're getting a huge indication as to what pairs to trade, (in any market conditions) and why.

« As Focus Shifts To Italy, Next In The Firing Line Will Be France Italy's Genie Is Out Of The Bottle »