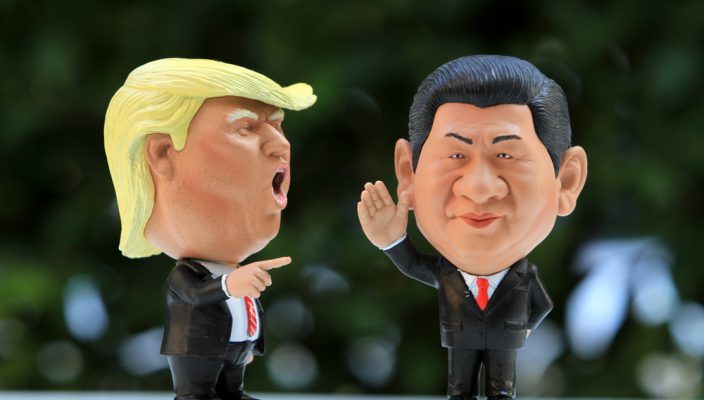 USA market indices futures rise, as analysts target a meeting, between Trump and Xi Jinping at June’s G20 summit, as a potential solution to the tariff war, USD rises versus peers.

May 14 • Forex Trading Articles, Market Commentaries • 623 Views • Comments Off on USA market indices futures rise, as analysts target a meeting, between Trump and Xi Jinping at June’s G20 summit, as a potential solution to the tariff war, USD rises versus peers.

Despite the USA applying 25% tariffs on $200b of Chinese imports from Friday May 14th, with China responding by attaching tariffs of up to 25% on $65b of USA goods, analysts and political commentators are hopeful that at June’s G20 meeting, Trump and Chinese leader Xi could reach a consensus and compromise. Analysts remain confident that these destructive tariffs will not come into force on goods currently in transit, or on exports which are in the process of leaving their respective ports. Consequently, futures markets in U.S. equity market indices rose; at 8:30am U.K. time SPX futures traded up 0.56% and the NASDAQ up 0.73%, after both indices sold off sharply during Monday’s New York session; closing down -2.41% and -3.41% respectively.

USD/CNY traded close to flat on Tuesday morning after rising by approximately 1.00% during Monday’s sessions, at 6.908 price has reached a high not seen since December 2018. Whilst a lower yuan value theoretically improves the value of Chinese imports, making them cheaper for USA commerce and consumers, applying 25% tariffs destroys the increased value gained by the lower yuan.

Chinese equity indices closed down on Tuesday, but by far less than on Monday; the Shanghai Composite closed down -0.69% and the CSI down -0.64%. Hong Kong’s Hang Seng closed down -1.67%, cutting the year to date 2019 rise to 8.56%. The U.S. dollar rose versus the majority of its peers on Tuesday morning, after selling off during Monday’s sessions, as investors sought safe haven in currencies and assets such as: CHF, JPY and XAU. At 9:00am U.K. time USD/JPY traded at 109.68 up 0.35%, as the early, bullish, daily, price action, saw price breach R1, clawing back the majority of losses endured during Monday’s sessions. USD/CHF traded up 0.11%, as price traded in a tight range, close to the daily pivot point, whilst displaying no directional bias.

The Aussie dollar, a currency whose fortune is closely aligned with China, based on the Australian economy’s reliance on exports to Asia’s powerhouse of growth, traded up marginally versus several peers during Tuesday’s early sessions. At 9:00am U.K. time AUD/USD was up 0.03%, at 0.694, whilst trading in a narrow daily range, oscillating between the first level of support and the daily pivot point.

Economic calendar news focused on Europe during the London-European trading session; Swiss producer and import prices have fallen by -0.6% year on year up to April, which could provide a boost to Swiss manufacturers and exporters, whilst German CPI came in as forecast, at 2.0% annually. The euro traded in tight ranges versus several of its peers, during the early sessions; at 9:15am EUR/USD traded at 1.123, up 0.15%, as the daily price action saw the major pair trade close to the daily P.P. The euro registered its largest gains versus sterling and yen; EUR/GBP traded up 0.23% breaching R1, whilst EUR/JPY traded up 0.51%, also breaching the first level of resistance, as yen’s safe haven appeal receded.

European equity markets rose during the early part of the London-European trading session; by 9:30am the U.K. FTSE 100 traded up 0.60%, climbing back over the 7,200 handle, Germany’s DAX traded up 0.33% with France’s CAC up 0.66%. At 9:30am the U.K. statistics agency, the ONS, published its latest series of data on the state of: unemployment, employment, wages and participation, within the U.K. economy. The claimant count rose by circa 25k in March, the unemployment rate fell to 3.8%, whilst individual earnings fell to 3.2%, year on year. The impact on sterling of the results was negligible; at 9:35am U.K. time GBP/USD traded down -0.13%, below the 1.300 handle at 1.293. The issue of Brexit is once again beginning to weigh heavily on sentiment surrounding the U.K. pound.

The latest May ZEW readings for Germany and the wider Eurozone delivered mixed results, when the data was published at 10:00am U.K. time; Germany’s current conditions metric registered  positive gains coming in at 8.2 beating forecasts of 6, whilst sentiment fell to -2.1 versus the Reuters forecast of 5. In its notes accompanying the figures, ZEW suggested the recent China-USA tariff issues has impacted on overall business sentiment, hence the rise in the conditions metric, but fall in overall sentiment. The euro was unchanged as a consequence of the ZEW releases.

« U.S. equity markets slump as China responds versus tariff threats, JPY and XAU rise as risk off sentiment causes safe haven appeal to increase. Moving from manual trading to automated, how to take the first steps. »