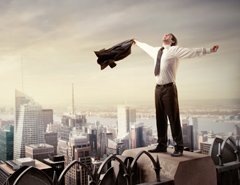 Amongst the hundreds of trading books available the subject of money management is hardly ever discussed, the predominant content of trading books usually consists of strategies, patterns, formulas..This pattern of content is repeated on forex trading forums. Look closely at the visitor numbers on the sub forum categories and you'll quickly discover that the main focus is on strategies and techniques, the money management sub forums have virtual tumble-weed blowing through them. However, as part of a trader's effective money management and discipline an understanding of expectancy is crucial.

Expectancy is the average amount you can expect to win (or lose) per unit of currency at risk. Here’s the formula for expectancy:

We will use Euros in the examples we choose to demonstrate what expectancy is and how getting it 'right' can aid your profitability. But first here's two respected authors and economists thoughts on expectancy;

Your trading system should have a positive expectancy and you should understand what that means. The natural bias that most people have is to go for high probability systems with high reliability. We all are given this bias that you need to be right. We’re taught at school that 94 percent or better is an A and 70 or below is failure. Nothing below 70 is acceptable. Everyone is looking for high reliability entry systems, but its expectancy that is the key. And the real key to expectancy is how you get out of the markets not how you get in. How you take profits and how you get out of a bad position to protect your assets. The expectancy is really the amount you’ll make on the average per dollar risked. If you have a methodology that makes you 50 cents or better per dollar risked, that’s superb. Most people don’t. That means if you risk $1,000 that you’ll make on the average $500 for every trade – that’s averaging winners and losers together.

In some strategies and life situations, it is said, one gambles dollars to win a succession of pennies. In others one risks a succession of pennies to win dollars. While one would think that the second category would be more appealing to investors and economic agents, we have an overwhelming evidence of the popularity of the first.

Therefore, on an average trade, 2% of the money traded is profit. Now, on first inspection that may not read like a decent return. If your average trade is €10,000 then 2% is €200 profit per trade. However, if you have 300 trades per year, then you have a €60,000 profit per year with an average trade of only €10,000. This does not even include any profits if you decide to compound each trade.

When experimenting with the 'expectancy formula', traders quickly come to realise that no single set of 'numbers' gives a positive expectancy, but there are an infinite number of sets therefore (in theory) there exists an infinite number of trading systems that could be profitable. That last sentence is hard for many traders (novice and experienced) to grasp as it tears at one the fabrics of trading – systemic/mechanical trading. The expectancy model is suggesting that even random systems can be profitable if the money management is sound. The expectancy model can also impact on another trading belief; it is possible to develop systems using expectancy and position size (overall risk) as the underpinning foundations where the stop loss is larger than the profit target. The stop loss could in fact be viewed as being redundant, if your profit expectancy is positive.

One of the more famous expectancy numbers originates from the CAN SLIM system. CAN SLIM refers to the seven-pronged mnemonic publicised by the American newspaper Investor's Business Daily, which claims to be a checklist of the characteristics performing stocks tend to share before their biggest gains. It was developed by Investor's Business Daily editor William O'Neil who has reportedly made several hundreds of millions of dollars by consistently using its approach.

The seven parts of the mnemonic are as follows:

C stands for Current earnings. Per share, current earnings should be up to 25%. Additionally, if earnings are accelerating in recent quarters, this is a positive prognostic sign.

A stands for Annual earnings, which should be up 25% or more in each of the last three years. Annual returns on equity should be 17% or more

N stands for New product or service, which refers to the idea that a company should have a new basic idea that fuels the earnings growth seen in the first two parts of the mnemonic. This product is what allows the stock to emerge from a proper chart pattern of its past earnings to allow it to continue to grow and achieve a new high for pricing. A notable example of this is Apple Computer's iPod.

S stands for Supply and demand. An index of a stock's demand can be seen by the trading volume of the stock, particularly during price increases.

L stands for Leader or laggard? O'Neil suggests buying "the leading stock in a leading industry". This somewhat qualitative measurement can be more objectively measured by the Relative Price Strength Rating (RPSR) of the stock, an index designed to measure the price of stock over the past 12 months in comparison to the rest of the market based on the S&P 500 or the TSE 300 over a set period of time.

I stands for Institutional sponsorship, which refers to the ownership of the stock by mutual funds, particularly in recent quarters. A quantitative measure here is the Accumulation/Distribution Rating, which is a gauge of mutual fund activity in a particular stock.

M stands for Market indexes, particularly the Dow Jones, S&P 500, and NASDAQ. During the time of investment, O'Neil prefers investing during times of definite uptrends of these three indices, as three out of four stocks tend to follow the general market pattern.

Expectancy must be positive if you want to make a profit over time. Never use a system with a zero or negative expectancy, you cannot win. You will not make a great deal of money unless you have a lot of opportunities to trade, whilst O'Neil's CAN SLIM may be limiting, given it's more stock related than forex, there are no such limitations on forex pairs. Knowing how to create a method, (at least on paper), with a positive expectancy is one issue, but if we develop a system with 8% expectancy and the system only yielded one trade per year, it would not be tradable. If we had a method that yielded 0.2% per trade and that system generated 1,000 trades per year 1,000 times 0.2% would become very serious money in a very short space of time.

« When the Tree Falls, the Monkeys Scatter – 树倒猢狲散 Falling on your sword is just so last century »