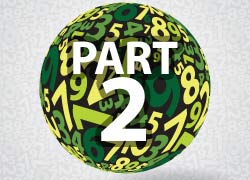 We left our discussion on the subject of the EUR/USD pair, as luck (or more likely probability) would have it, price aggregated at 13400 during the compilation of the article. I left readers in ‘suspense’ as to which direction price would most likely be headed given the upcoming ECB interest decision scheduled for December 8th and the next crucial meeting scheduled for December 9th.

The point of the linked articles is to suggest that looming large round numbers can play a crucial role and have a significant impact on our trading decisions. If traders were to hazard a guess as to what the highest price EUR/USD reached on 7th December 2010 without looking at their charts would the answer be 13400? Over a twelve month period EUR/USD has reached back to the same level it reached back in 2010.

Price has remained within a very tight range over the past twenty four hours and as began compiling this article (10:58 am GMT) price is 13390, price had hardly moved away from the ‘gravitational’ pull of the key round number of 13400. As I now finish (19:02 pm GMT) price is at 13410. Many institutional level traders will be predicting the lowering of interest rates by the ECB tomorrow which could lower the value of the euro. Conversely positive news the following day with regards to the latest ‘summit’ could increase positive sentiment and send the euro higher. It’s therefore entirely predictable that whilst EUR/USD may move in a range of perhaps fifty pips or so throughout the preceding day it’s unlikely to break through any major trends until a decision on one (or both) events is reached.

We’re facing massive once in a generation decisions with regards to Europe and our seventeen nation shared currency, investors and speculators have their weathered eyes on December 8-9th and by the time the billions of currency trades are plugged into our ‘matrix’ the end result is price hovering very close to a key looming round number. Spooky? No. The power of maths? No. Quite simply this round number is the result on intense speculation and cumulative activity reaching the general consensus that opinion is on a knife edge as to which direction the powers that be will take the continent of Europe and our shared currency.

The currency pair is now trapped in a range awaiting crucial macro economic fundamental decision making. Before we delve into the various techniques to trade off round numbers it may be worth readers casting an eye over the daily chart, plotting the 200 ma and taking a close eye as to the timing of the bearish sentiment which gripped the currency pair.

The trend turned on the 31st October when price fell through 14000 which whilst being a significant round number it was also close to the 200 ma. Not withstanding the usual ‘pauses for breath’ price then careered down to its recent low reached on the 25th of November, can we guess what price collapsed to in this run down? I’d love to state 13200 as a significant number but it wasn’t quite there, it reached 13212 as near to 13200 as necessary to prove the overall point that during October 31st to November 25th the EUR/USD trended between two significant round numbers and collapsed through the 200 ma to begin it’s downward trajectory of close on 800 pips. Before we leave the chart there’s a couple of other points on the chart worth noting; the weekly support level is marked close to 13200 at 13190, and two horizontal resistance trend lines are drawn at 14000 and 14500..

The run up on the EUR/USD to 1.4000 in October and the consequent pullback from that level throughout November is a dynamic that historically repeats itself over and over. Human beings are naturally attracted to the order of round numbers and as traders it’s essential that we’re always aware of that behaviour in order to help us properly position our trades.

How do round numbers become support or resistance? Round numbers work simply because human nature has led to them becoming significant. We work best with approximations. We constantly hear traders in our community making comments such as; “If stock XYZ gets down to $10 that’s a bargain, and a definite buy”, or “There’s no way stock ABC will get over $75, so if it gets up there I’m going to take profits.” Note that they don’t say that XYZ is a bargain at $10.13, or ABC is oversold at $77.68. We all work better with round numbers.

This will, as a natural consequence, lead to a greater proportion of orders to buy at or around the XYZ $10 level, and a greater proportion of orders to sell at or around the ABC $75 level. And it’s these orders that increase the likelihood of $10 becoming support and $75 becoming resistance and you hear this approximation in all markets. Similarly if you subscribe to any notes from leading FX commentators from, for example, Deutsche bank or Citi they’ll refer far more to support and resistance and looming round numbers than micro numbers.

There’s been much trader chatter over the previous twelve months, about USD/CAD falling to parity at 1.0000. This talk doesn’t guarantee support or resistance at these areas. However, it should act as a warning of a potential barrier to further price movement. In the 1970’s and early 1980’s the Dow Jones Industrial Average approached the 1000 barrier seventeen times before it finally broke through, but once breached it ushered in a two decade long bull run that went through 10,000 and beyond. In the FX market we see the pull of the round numbers every day.

For many traders round number trading may come as a revelation, particularly for those in our community constantly chasing the ‘Holy Grail’. Whilst the revelation of round numbers is significant it’s extremely difficult to build a trading strategy using these key numbers in isolation. Simply because price is at a round number doesn’t mean it will pause there. Rather, it’s a factor which will simply increase confidence in any area already identified as support or resistance. Looking for levels of support or resistance through swing highs and lows or congestion areas, if they then coincide with round numbers, should enhance our trade confidence in an individual trade.

Many forex traders, from the individual speculator to the large fund, will focus on the large round figures or round numbers when applying their analysis to the forex market for a number of reasons. For that reason, ‘large round numbers’ such as 1.3100 or 1.3250 tend to carry a greater weight of importance. However this can be misleading as the forex market can often spill over to trade slightly above or below a price level of importance. For that reason we should naturally expect the ultimate highs and lows to rest at times slightly beyond these areas.

How to use Round Numbers in your trading strategy

Types of Round Numbers

Parity
One of the strongest types of round numbers. You can see that levels such as 1.0000 take months to finally be broken by either bulls or bears. Once breached the significance can be considerable.

Thousands
This is also a crucial levels of support or resistance. Traders may notice a lot of 1.4000 in the market.

Hundreds
Numbers such as 1.2400 are often found and become significant zones for market outcome for selected sessions.

Round numbers are psychological support/resistance levels. If EUR/USD is going upwards and reaches 1.5000, you will notice strong bearish reactions, because a lot of traders believe that the currency pair cannot go any higher than that level, therefore they sell in fear of losing their profits.

Traders can also use the round numbers as the method part of a short term strategy. Psychological levels are 00, 25, 50 and 75. In order to use these particular numbers, traders could consider going short when the market goes up and one of these levels is reached. This method can be a very effective scalping method.

The longer traders speculate in the currency markets, the more they become convinced that round numbers play an important role in the structure and behaviour of price action.

The reason why round numbers take on such extra importance in the FX market could be due to the lack of fundamental valuation information available in the FX market. With individual stocks, analysts can calculate a value based on earnings, profits etc. In the currency markets there is fundamental information in the form of economic releases and interest rate information, it is much harder to ‘value’ a currency, because it is always traded against another currency.  Purchasing power parity is as good as it gets for currency traders.

It is clear that as human beings we place more significance on a level that our minds can easily focus on such as 1.4000, than an arbitrary level such as 1.3873. By focusing on the importance of round numbers, the forex trader always has two important levels by which to gauge his entry.  Price will always be between two ‘hundreds’ and between a ‘hundred’ and the nearest ‘fifty’.  By using these levels alongside support and resistance areas formed by the market, traders can map where they are quickly and easily. Time and time again, price will get drawn to the round numbers like a strong magnet is pulling them.  Failure to break through can often result in prices rebounding sharply.

If you are new to trading, being aware of how prices react at these levels can be valuable.  If price has risen from 80 to 00 in a matter of minutes, you know the chances are it may stall at the 00 level, as it often takes momentum to push through. It may break by 10 pips or 20, but if it does, a retest of the 00 level can often be seen.

Whilst not a trading tool that can be pulled out of the trader’s locker or arsenal round numbers are vital for traders’ overall holistic intelligence and unlike support and resistance, the daily pivot or moving averages they require no addition to traders’ charts.