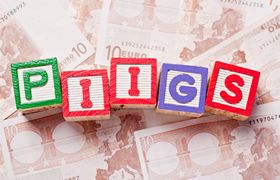 There can’t be many of us who haven’t experienced that “too much month at the end of the money” dilemma and I suppose the cliche; “it’s all relative” fits were Greece is concerned. Particularly if you spent heavily at Xmas that next Jan. pay cheque can’t come quickly enough. If Greece are only ten percent out or so with their calculations it’s surely just one of those things that happens. It’s a bit like us getting that bank statement, or doing a mini cash statement at the ATM and realizing we’re ten percent out..but €15 bl? They didn’t have Xmas presents to buy did they?

Just as we all finally thought that the Greece issue was nearing an end and we could move onto Spain, Italy or France, or perhaps the USA, the pressure is now back on Greece. It’s been cranked up after international debt inspectors admitted an additional €15bn is required in order to fill a…ahem…”newly discovered black hole” in the country’s finances.

This on a day when Ireland’s government reduced its growth forecast and Madrid told Spanish banks to raise an extra €15bl in order to cover toxic assets mainly accumulated as a result of rampant property speculation pre the recession. Brussels officials said European countries and state-owned banks would need to contribute in order to help dig Athens out of its potential fiscal grave..

The fresh evidence of Greece’s desperate situation apparently arrived as it continued to discuss the terms of a deal with private sector creditors, potentially writing down debts by €100bn. There’s an admission that the haircut being taken by banks, hedge funds and insurance companies won’t be enough to remove the risk of a default.

The troika believes that Greece faces an impossible task in reducing debt when the economy is in such deep recession, and now accepts that the country’s sovereign creditors will have to supplement the debt relief being provided by the private sector. Spending cuts, tax increases and the general uncertainty of the crisis have already pushed Greece into a slump, a slump amplified and accelerated by the disastrous and illogical austerity measures.

Ireland’s central bank slashed its growth forecast for 2012 from 1.8% to just 0.5%, blaming a slowdown in consumer spending and a tougher outlook for exports due to Europe’s debt crisis.

Spain’s finance minister, Luis de Guindos, has instructed banks they need to make extra provision for bad loans and write downs in the country’s battered property sector. Banks absorbed large amounts of toxic assets as building developers default on loans in a country with a glut of over 500,000 unsold new homes. They made provision for a third of the €176bn of “troubled” assets on their books, according to Spain’s central bank. Under new rules provisions against building lots will reach 80%. Ongoing building developments will hit 65%, provisions for completed houses will reach 35%.

Market Overview
Oil slid to a six-week low as supplies rose. The dollar and Treasuries were little changed. Stocks and the euro traded flat on Thursday as data signalling improvement in the U.S. labor market and remarks by Federal Reserve Chairman Ben Bernanke that suggested some economic optimism were offset by concerns over Europe’s debt crisis.

Tomorrow’s monthly payrolls data is forecast to show employment grew by 140,000 last month after rising 200,000 in December and the jobless rate held at an almost three-year low of 8.5 percent, according to a Bloomberg survey of economists. According to a Reuters survey Friday’s report is expected to show non-farm payrolls rose by 150,000 in January, down from a gain of 200,000 jobs in December. The unemployment rate is seen holding steady at a near three-year low of 8.5 percent.

The Stoxx 600 rose for a third straight day. Shares of Xstrata Plc jumped 9.9 percent as the mining company said Glencore International Plc offered to buy the shares it didn’t already own. Glencore advanced 6.9 percent. Joining the two natural resources companies would combine the world’s largest listed commodity trader with a producer of coal, copper and nickel from Africa to Asia.

« The UK Is A Rock In A Hard Place As Greece Enters The Final Countdown, Analysts Question How Much Further This Bullish Rally Can Extend? »