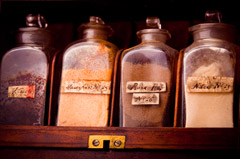 The California Gold Rush of 1848–1855 began on January 24, 1848, when gold was found by James W. Marshall at Sutter’s Mill in Coloma, California. Approximately 300,000 people migrated to California from the rest of the United States and abroad to be part of the phenomena. Of that 300,000, approximately half arrived by sea and half came overland on the California Trail and the Gila River trail.

One of the remarkable twists of irony during the gold rush period is that suppliers of goods and services were far more profitable than the miners. Those who; sold picks and shovels, who provided horses, carts, timber, who eventually invested in real-estate were those who ‘got rich’ and in some instances stayed wealthy. San Francisco grew from a small settlement of about 200 residents in 1846 to a boomtown of about 36,000 by 1852. Roads, churches, schools and other towns were built throughout California. The 49ers, the excited pioneering excited panhandling prospectors, left mainly empty handed once their enthusiasm and money was spent.

There is no doubt that the ‘internet revolution’ has revolutionised trading. One of the predictable outcomes is the growth in trading strategies available to purchase over the Internet, either by download, or disk, or by membership of live trading ‘clubs’. The marketeers peddling these wares could either be favourably compared to those selling picks and shovels for prospectors, providing the necessary tools to do the job at a reasonable price and fair value, or unfavourably compared to those selling snake-oil remedies at around the same time. Actually it’s a little known fact that there really was a genuine snake oil and it had been used (and still is) as a pain remedy for hundreds of years.

The original snake-oil came from Chinese water snakes and was used in China as a treatment for arthritis, bursitis and other joint pains. It was brought to North America during the Gold Rush in the mid-1800s. The oil – fat taken from the snakes, was actually studied in the 1980s and found to be full of omega-3 fatty acids, acids which are prescribed today to reduce inflammation (which can lead to arthritis), reduce blood pressure and more. So how did snake oil get such a ‘bad rep’?

The original Chinese snake-oil contained a high percentage of real snake fat that today’s science tells us could supply relief. The hustlers of the 1840’s probably watered down their products to such an extent that the pain-relieving properties were diluted. They also used rattlesnakes and other native North American snakes to derive their snake-oil instead of water or sea snakes. So how do we, as traders, differentiate between snake-oil and snake-oil?

Firstly any moderately ‘successful’ trader is capable of creating an ‘in the box’ strategy to then market, either as a download or in a live trading forum environment, it’s no more complicated than creating your own expert advisor to run on meta trader. You could pick any of the hundreds of tested and listed indicators freely available on the web, mix up perhaps three, develop your own ‘proprietary’ trend line, give it a name, and abracadabra you’re in the system selling game. Once curve fitted you can then sell it. Even better, if you backtest the results to obtain the curve fit, then attach a PDF type document as proof, you’ve ticked the two boxes most want to see ‘ticked’ before purchasing a system. The question therefore is why buy a virtual boxed system when you’re capable of designing your own strategy, containing the most important ‘curve fit’ of all, your personality?

Many of us will experiment with buying systems or joining trading clubs as novices, as our experience and expertise increases we realise that the most important trading relationship you can develop is with your broker. The system seller wants that one off sale, whilst mindful of his ‘rep’ statistically he’s only too aware of the short shelf life of his just in time product as it’s no doubt been curve fitted to match the most recent market conditions. This is why you’ll also witness certain systems making ‘comebacks’ during certain times of the year. The marketeer may add a word such as turbo on the end in order to freshen up the brand to ensnare more sales.

Your broker doesn’t want your business once, he doesn’t want that ‘one off’ sale. He wants you to flourish and will actively encourage you to partake in all he has to offer free of charge. Concentrate and remain focused on that relationship, ask questions, ask to be put on the guest list for events, ask to visit the brokers premises, get out of your comfort zone and get involved…