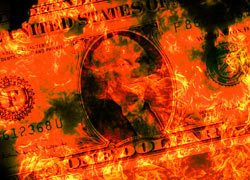 Dec 22 • Between the lines • 41784 Views • 8 Comments on The KLF Were Lightweights At Burning Money. The Swiss Know How, When And Why To Do It

Their most notorious performance was a collaboration with Extreme Noise Terror at the February 1992 BRIT Awards, where they fired machine gun blanks into the audience and dumped a dead sheep at the after-show party. This performance announced The KLF’s departure from the music business, and in May 1992 the duo deleted their entire back catalogue.

Their creation, the K Foundation, created a stir two years later. “Burning a Million Quid” was an action that took place on 23 August 1994, in which the K Foundation (the KLF duo consisting of Bill Drummond and Jimmy Cauty) burned cash in the amount of one million pounds sterling on the Scottish island of Jura. This money represented the bulk of the K Foundation’s funds, earned by Drummond and Cauty as The KLF, one of the United Kingdom’s most successful pop groups of the early 1990s.

The incineration was recorded on a Hi-8 video camera by K Foundation collaborator Gimpo. In August 1995, the film “Watch the K Foundation Burn a Million Quid”, was toured around the UK, with Drummond and Cauty engaging each audience in debate about the burning and its meaning. In November 1995, the duo pledged to dissolve the K Foundation and to refrain from public discussion of the burning for a period of 23 years. Despite this Drummond has spoken about the burning in 2000 and 2004. At first he was unrepentant but in 2004, he admitted to the BBC that he regretted burning the money…

Of all the financial headlines and actions that caught my attention in 2011 understandably currency events rank highest. Repatriation was a big issue in 2011 and there were many inexperienced investors caught out by the devastating tsunami and earthquake in Japan. The yen didn’t fall it rallied given that hundreds of billions of yen would have to ‘come home’ in order to re-build the infrastructure. At such times what we do, speculate on currency movements, is rendered ridiculous when you see footage of a country and it’s people being savaged and ravaged by nature. I closed all my trades, I’ll be honest it owed as much to self preservation as respect, but the juxtaposition that Japan’s devastating event had impacted on my business some 6,000 miles and a time zone away required quiet reflection, not interaction..

However, there was another currency issue that caught my eye over recent months and that was the Swiss National Bank’s deliberate intervention to lower the value of the franc. Whilst the SNB action of ‘burning money’ by purchase was considerably greater than the act KLF performed on the remote Scottish island of Jura in 1994 (even allowing for inflation) what the SNB performed caused the same feeling of initial bewilderment.

Yes we’re currency investors and speculators, trying to make a decent living or invest what we have for a brighter future for us and our loved ones. Most of us don’t have ambitions to be the next ‘Soros’, just to enjoy our good fortune of having found a brilliant industry in which to ply our trade, perhaps to forge a career for ourselves and thrive, both in and out of our industry.

But when you read that the Swiss Central Bank actually put into action a programme to deliberately lower the value of their currency by buying up weaker currencies, i.e. they “planned to fail”. Whilst they didn’t destroy liquidity and increased the ability for their manufacturers to export; machinery, chemicals, metals, watches, agricultural products being their chief exports, the action to ‘burn’ through circa 41 billion francs was quite a revelation.

But on closer inspection their action makes perfect sense, particularly given the Swiss recent history of utilising this method successfully. Devaluation on this scale is nothing new to The Swiss, they know what they’re doing, it ‘worked’ before therefore in theory and based on previous practice it should work again.

2. Switzerland’s national bank should revive investments by lowering interest rates. Besides that monetary institutes should increasingly credit consumers and offer cheaper land zones which are to be built on.

3. Switzerland’s national bank is asked to devalue the Swiss Franc, especially compared to the Euro.

These measures were applied with successful results along with the government’s policy of the Magical Hexagon which consists of full employment, social equality, economic growth, environmental quality, positive trade balance and price stability.

Whilst KLF admitted to regretting the burning of their cash pile of £1,000,000 the Swiss won’t regret the destruction of value in the Swiss franc. Their Magical Hexagon model could be considered as the perfect equilibrium and attainment goal for a developed culture, society and economy. Full employment, social equality, economic growth, environmental quality, a positive trade balance and price stability would be the best end of year and New Year wish any of us could hope for. Both the future of our domestic economies and that of the global economy.