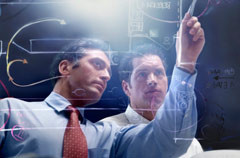 The four corners of trader development

After practicing an overlapping drill last Friday with my football youth team I reminded one of the seventeen year olds, who I’ve known and coached since the age of five, that the first time we did this drill he was seven. In fact his memory of the drill proved better than mine and he performed it superbly; in terms of timing, weight on the pass, acceleration to be in the right zone, compensating for others’ weak passes, the drill was superbly executed.

Later on I considered the development of certain players I’ve known since they were no more than infants and how their development paths have all taken different routes and time. Within football coaching echelons we’re often given the advice (from the F.A.) that during childhood the development span of a child could be up to five years, for example, a ten year old could be playing at the overall level of a fifteen year old, similarly other youngsters could still be at the playing level of five year olds.

The F.A. created some intel on this subject, it was termed “the four corners of development”. Pondering on its merits I decided it would be an incredibly useful exercise to use the stages of development as a reference to reveal how we unconsciously develop as traders.

We narrow the four corners of development into two areas, consciousness and competence;

These four key development stages are broken down like this:

A very young unconsciously incompetent player could be struggling with his football competence – his skills. Similarly he could also be ‘unconscious’ and not aware of any reason to improve. He may have no desire to improve and be simply oblivious to the overall instructions given in training, or during the game. Perhaps Mum and Dad are encouraging him to participate in the sport at an early age, but he just isn’t quite ready.

The next stage of consciously incompetent can be very frustrating for the player as he begins to enjoy the training sessions and matches; he knows what’s expected of him, realises what he has to do in order to improve, but still hasn’t developed the range of skills necessary to compete. He may also have developed a real love for the game, have encyclopaedic knowledge of his favourite team and players, with the right encouragement and coaching he can become a very competent player and valuable member of the team and squad.

This can be a crucial pivot point in a young player’s development, he realises that Jack or Tom is at the moment a ‘better’ player than him and has developed the maturity to accept that situation. This can be a very off putting period (if handled badly) as the youngster may feel he’ll never catch up. Likewise it can be an incredibly stimulating time if he’s given the right encouragement from other parents and coaches who know (using our five year development metric) that the majority of players do not even begin to become the ‘finished product’ until entering late teens.

The player can then move out of the consciously incompetent stage to become a consciously competent player. His skills have improved massively, and he’s become conscious of so many other aspects of the game necessary to become a really valuable member of the squad. However, he may lack some of the other qualities necessary to flourish, for example, the unconscious ability to find space and time on the pitch, to be in the right place at the right time, how to conserve energy at certain stages of the game etc. The player may be ‘mechanical’, needing constant supervision and instruction throughout the game.

The fourth stage of development is where he may meet, catch up and perhaps overtake other members the squad, we term these players the unconsciously competent. The players who seems to have it all from day one of being involved in the game. They could find passes, score goals, win their personal battles and appeared years ahead of their peer group. The mistake is that coaches fail to recognise that those children are not the norm, they have developed at an early age but their development rate may slow down, as other children mature physically and psychologically they begin to meet them on the pathway.

However, given the fact that many of the children who started off as unconsciously incompetent reach a high standard having literary cut their knees, got bruises, had their hearts broken on occasion by not making the team, they are undoubtedly better equipped emotionally more than the ‘naturally gifted’ to cope and deal with the challenges and disappointments they’ll no doubt encounter during their playing career. In fact those who go through the four stages of development are less likely in their late teens to give the game up. They’ve also been very realistic in their football ‘ambitions’. Having had no pressure from pushy parents or coaches, that they could perhaps make the professional ranks, they’ll more than likely maintain their fitness, their love of the game and have realistic expectations, this group is far more likely to play at decent amateur levels right up until their thirties.

In trading we may know certain traders who appear to have led a charmed trading life, they have been able to unconsciously find and execute those winning trades at a very early stage of their trader development. However, similar to our football players who had to move through the gears to begin to become the finished product, traders who take more time than the naturally gifted to become the finished article may be better more rounded individuals and become better traders as a consequence. Their bruised hearts and knees experiences have equipped them for a successful trading career in a far better manner than the bright light who may crash and burn. There are no shortcuts to this business, it really is a birth by a thousand cuts.