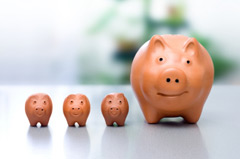 The power of compounding is the eighth wonder of the world

It's fascinating to consider how myths originate, for example, both of the two quotes above are attributed to Albert Einstein, however, the second quote might not be, credit could be given to the American writer Rita Mae Brown. A quote verifiably attributed to Friedrich Nietzsche – "In individuals, insanity is rare; but in groups, parties, nations and epochs, it is the rule", is very apt when you consider how 'group think' exists in the trading community.

One of the most legendary trading myths, that's stubbornly retained its longevity over the past decade without being throughly debunked, is the 'compounding' myth. The myth breaks down like this; you open a trading account and trade with perhaps two percent risk, you keep the risk at the same level and as your account grows you compound your risk and profit. The account grows exponentially and you're then taking calls off Warren Buffet and George Soros who desperately want to buy into your 'knowledge'. If you begin trading with €1000 trading with 0.1% risk and increase that risk to 3% (at regular pre planned intervals) then after two hundred trading days your initial balance will now be €369,355.82…what could possibly go wrong?

It's obvious how this compounding myth has mushroomed within the trading community over the past decade, the internet as a viral communication medium has ensured it's status. However, the assumptive nature of the hypothesis does not stand up to close scrutiny…

The assumption that the investment return would be predictable is absurd, no market gives predictable returns each day, would we ask our bank to increase our levels of interest each day from the current 0.25% and compound our savings for no other reason than we demand such a return, therefore how can we demand levels of return from markets because we simply exist and engage with them?

To assume that volatile markets are predictable is equally bizarre, no return is straight line or parabolic. Losing trades, losing days (and weeks), delivering inconsistent returns are something all traders experience no matter what level of skill they possess. If we could guarantee that, for example, the Swiss franc would appreciate versus other currencies each day then market forces would scupper the theory. Firstly we'd probably be last in queue, hedge funds and the likes of Deutsche bank would no doubt corner the market and literary own 'all the money in the world'. Perversely in attempting to do so some other bright sparks may be tempted to counter and engage in such risk free arbitrage.

Imagine for a moment the Swiss central bank suddenly creates a new policy directive and directly scuppers our one way bet, dumping their own currency and buying up others' currency reserves in an 'end of days CHF currency pairs trading epoch? That couldn't possibly happen could it?

The myth of compounding relies on the trader's skill to ensure a positive return daily. However, there are two key glaring faults with that plan. Firstly, in order to have gained the necessary experience and knowledge to be so skilled in the market the trader must be full time. Secondly, If the trader is full time he or she must derive an income from the market. Even if they'd evolved to some mythical super trader status they'd then need a separate income to prevent the returns on their compounded account from being interrupted by taking a wage.

Whilst the mathematical logic and 'purity' of compounding is sound its use, in terms of practicalities were trading is concerned, renders the theory useless. The best traders refuse to be fooled by the randomness of the markets, they accept the losses and unpredictable returns as part of the price of doing business and refuse to be diverted by fantasy returns or fictional trading mythology.

Humans live through their myths and only endure their realities

Nothing of any importance can be taught. It can only be learned, and with blood and sweat