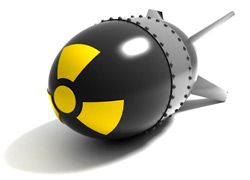 The B53 is the USA economy

The process of dismantling the last remaining B53 bomb in the USA stockpile commenced on 25 October 2011 and was completed soon afterwards. The Mk/B-53 was a high-yield bunker buster thermonuclear weapon developed by the United States during the Cold War. With a yield of 9 megatons of TNT it was the most powerful weapon in the US nuclear arsenal after the last B41 nuclear bombs were retired in 1976. The warhead of the B53 used highly enriched uranium instead of plutonium for fission, with a mix of lithium-6 fuel for fusion.

Two variants were made: the B53-Y1, a "dirty" weapon using a U-238-encased secondary, and the B53-Y2 "clean" version with a non-fissile (lead or tungsten) secondary casing. Explosive yield was approximately nine megatons. Development of the weapon began in 1955. The Mk 53 entered production in 1962 and was built through June 1965. About 340 bombs were built. From 1968 it was renamed the B53.

The B53 was intended to be retired in the 1980s, but 50 units remained in the active stockpile until the deployment of the B61-11 in 1997. At that point the obsolete B53s were slated for immediate disassembly; however, the process of disassembling the units was hampered by safety concerns as well as a lack of resources. In 2010 authorisation was given to disassemble the 50 bombs…

It's such an unassuming word yet mentioning "stagflation" in the wrong circles can cause quite a stir. It's one of the most frightening concepts economic policy makers have to contend with, stagflation is classically described as a condition of slow economic growth and relatively high unemployment – a time of stagnation – accompanied by a rise in prices, or inflation. In simple terms stagflation occurs when the economy isn't growing but prices are. This happened to a great extent during the 1970's, when world oil prices rose dramatically, fuelling sharp inflation in developed countries. For these countries, including the U.S. stagnation increased the inflationary effects. Economic policy makers are obsessed with growth, in the UK growth is circa 1%, inflation is 5.5%, it doesn't require a degree of economics from the LSE to know that as a economic model that's not sustainable.

Economics 2008 Nobel Prize winner Paul Krugman stated in November 2010 that the United States was heading along a path of stagnation and deflation similar to that of Japan eighteen years previous given the critical economic situation and the uncertain political scenario in the USA. Krugman stated that the monetary policy applied in United States and the European Union reflected its own limits, the Federal Reserve and the European Central Bank have lowered interest rates to zero but have been unable to re-launch their economies and are “having great difficulties in finding a solution”.

Krugman argued that the only possible way to avoid stagnation was through expenditure in infrastructure, with low interest rates, which could create millions of jobs for the unemployed, but admitted that Washington refuses “to confront such public expenditure”. He mentioned as an example of this reticence the recent cancelling of a major public works infrastructure in the US, the construction of a train tunnel below the River Hudson in New York.

This economic slowdown, this depression can continue for a long time…It’s a crisis of the North Atlantic, of the United States and Western Europe.

Many commentators and market analysts suggested that at the time of the 2008 crisis the 'best' we could hope for in terms or recovery was a series of Japanese style lost decades. Once the USA set its course firmly on zirp (zero interest rate policy) the comparison with Japan appeared to be highly relevant. Many economists warned during the period of 2008-2010 that the economic formula of QE + zirp = stagflation = fail. When Japan adopted its close to zirp policy in the 1980's its lost decades were a baked in certainty, lessons ignored by the USA and EU policy makers.

A measurement of economic health that is often used as a gauge is house prices, ignoring the current malaise in the USA, were each month a micro movement in loans or house prices is super-analysed, the situation has become so dire that the govt. will got to lengths to keep folk in their over indebted homes as opposed to letting lenders reclaim any more distressed asset losses onto their already 'cooked books'. They need mortgagees to stay mired in their debt if more QE is to be engineered later this year, or early 2012. When house prices collapsed in Japan in the 1980's it took until 2007 for prices to recover and rise. When the global financial meltdown hit in 2008 prices fell back again. In summary the 'hit' property took from its peak to trough lasted circa twenty years, and in the current climate the expectation is that Japanese house prices will not increase in the short term, possibly another lost decade, a thirty year stagnation/stagflation period. As a cautionary note Japan's debt, vis a vis its GDP, is currently circa 197%

When considering in isolation the gargantuan sums the USA fed and administrations have created since 2008 in terms of bail outs (secretive and published) and quantitative easing and yet still the unemployment rate (official) remains at circa 9.1% you begin to realise that the medicine didn't work, whilst it moderated the symptoms it didn't affect the root cause of the problems. That the US admin is considering QE3 is proof, if any were needed, that the USA is out of bullets so has to 'make' more.

There are some desperate stats available describing the sickness of the USA economy; the poverty, the foreclosure rate, the failed business numbers, the $1trillion+ student debt to name a few, yet in best Hollywood style the real issues are always glossed over in favour of the hero complex the US mass psyche appears wedded to and in Obama that heroic figure has lost his gloss and whilst the market focus is on the European sovereign debt crisis the global elephant in the room continues to escape scrutiny. However, focus may shift back to the US once the subject of the debt ceiling rears its head again.

Unpicking the USA economy, in order for it to become competitive vis a vis the BRICS economies, will prove extremely difficult. The USA economy is 70% dependent on consumerism, holding down wages globally in the undeveloped world, in order that developed economies can thrive, can no longer be the foundations of a sustainable economic model. The USA debt is circa 99% of GDP, in 2009 it was 83% of GDP, two credit rating agencies have the country on a negative outlook. Looking at a snapshot as to where the USA was in 2009 versus 2011 reveals some startling and increasingly worrying trends.

2009
As of January 20, 2009, the total U.S. federal debt was $10.627 trillion. The borrowing cap debt ceiling as of 2005 stood at $8.18 trillion. In March 2006, Congress raised that ceiling an additional $0.79 trillion to $8.97 trillion, which is approximately 68% of GDP. Congress has used this method to deal with an encroaching debt ceiling in previous years, as the federal borrowing limit was raised in 2002 and 2003. As of October 4, 2008, the "Emergency Economic Stabilization Act of 2008" raised the current debt ceiling to US$ 11.3 trillion. The federal government's debt rose by almost $1.4 trillion in 2009, and now stands at $12.1 trillion. While the U.S. public debt is the world's largest in absolute size, another measure is its size relative to the nation's GDP. As of 2009 the debt was 83 percent of GDP. This debt, as a percent of GDP, is still less than the debt of Japan (192%) and roughly equivalent to those of a few western European nations.

The USA has increased its debt ceiling by circa 40.5% since 2009 during such time its debt versus GDP figure has flirted with the 100% figure. Its economic model is a B 53; obsolete, dangerous, deliberately threatening by use of hegemony and carefully hidden for decades. Just like the B53 the catastrophic potential it has to ruin the global economy until it's finally de-commissioned is beyond comprehension.

« Can You Kick It? Yes You Can Taking a Knife to a Gunfight, the Trillion Euro Sticking Plaster »